Wargaming the Electoral College is back, and just in time for RBG Replacement Madness to frustrate nearly everyone’s plans and predictions.

Four years ago this month, my first and wildest Wargaming the Electoral College scenario in which Donald Trump won was what I called the “northern route” to a Trump victory through the Rust Belt states.

As it turned out, that’s exactly how Trump did win.

It was a close-run thing, and if the state polls are anything to go by then it’s going to be even tougher for Trump to pull off a second time.

It isn’t that the polls are necessarily wrong, it’s just that the electorate is going to be much more fluid in a crazy year like 2020.

More than figuring out who people are going to vote for, pollsters have to figure out who is actually going to show up and vote.

I’m not sure anyone has any clue how to determine who the Likely Voters are in a year like 2020.

If I were a pollster, I’d be bald from all the hair-pulling.

That said, we have to start somewhere, so let’s begin as we do every four years with the RealClearPolitics poll averages.

According to RCP, Joe Biden has a daunting (if not insurmountable) lead in many swing states, while Trump is struggling to hold on to must-win states like… Texas? 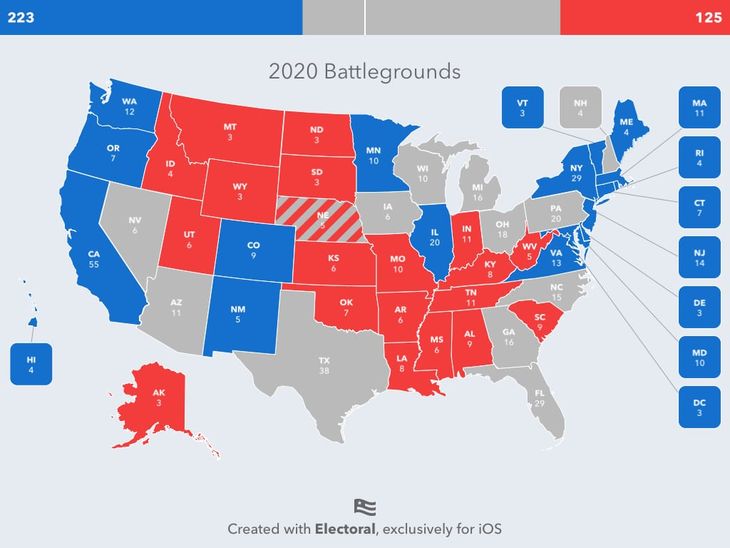 Wargaming the Electoral College is supposed to be at least somewhat realistic, and yet here we are.

At least, the polls say Texas is in play.

And even though Cruz is generally not well-liked, he …cruised… to victory.

So we’re just going to fill in Texas red and leave it that way (for now).

RCP’s poll averages also show a Biden blowout if the election were held today — and I’m going to have to call BS on these polls.

To buy into this scenario, you’d have to think that low-energy/low-enthusiasm Biden could beat Trump by more than Barack Obama beat Mitt Romney in 2012.

Romney barely tried and Obama was a cultural-political phenomenon — if an undeserving one.

Trump, meanwhile, is a fighter with an amazing ground game and tremendous enthusiasm.

If we’re going to believe that last map, then why not this one? 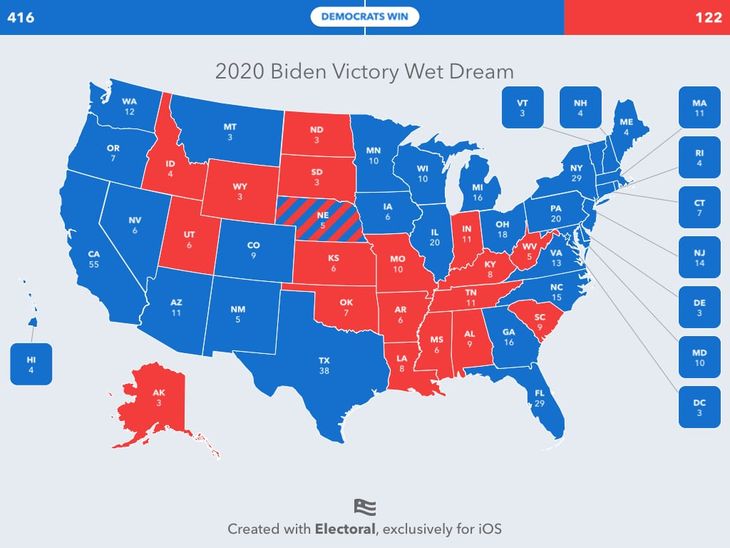 Democrats Are a Threat to the Constitution in the 2020 Elections

We’ll call this map Wargaming the Electoral College Scenario 1, and just like the headline promised, yes it would be startling.

For what it’s worth, FiveThirtyEight’s Nate Silver did tweet an Electoral College map in recent weeks showing something close to this result, in which Biden outperforms George Bush’s 1988 win over Mike Dukakis.

Dukakis was a terrible campaigner and Bush was basically running for Ronald Reagan’s third term.

For my Wargaming dollar, a Biden victory would be a much closer thing resulting from an appeal to the blue-collar voters who broke for Trump in 2016.

With that in mind, here’s Wargaming the Electoral College Scenario 2: 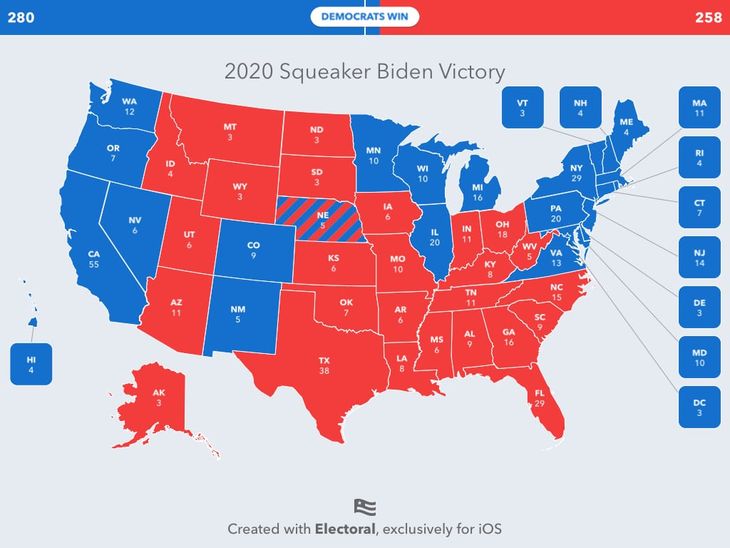 This is Biden’s easiest and most obvious route to a win, and if he and his team execute it well, they could even snag Ohio and Iowa for a 304-234 tally.

Biden has a history of blue-collar appeal, but this is not your father’s Joe Biden. He’s the virtual sock puppet of his party’s radical wing, and it’s hard to see how he maintains his historical appeal.

In a close race, Trump, with the three Rust Belt states he flipped in 2016 — Michigan, Pennsylvania, and Wisconsin — could afford to lose any two and still eke out a victory.

Provided, that is, Trump picks up one of Maine’s splittable EC votes and doesn’t lose one in Nebraska. Otherwise, Trump must hold Pennsylvania if he loses Michigan and Wisconsin.

A narrow Trump win, in which Biden clawed back much of the Rust Belt, but not enough, is Wargaming the Electoral College Scenario 3. 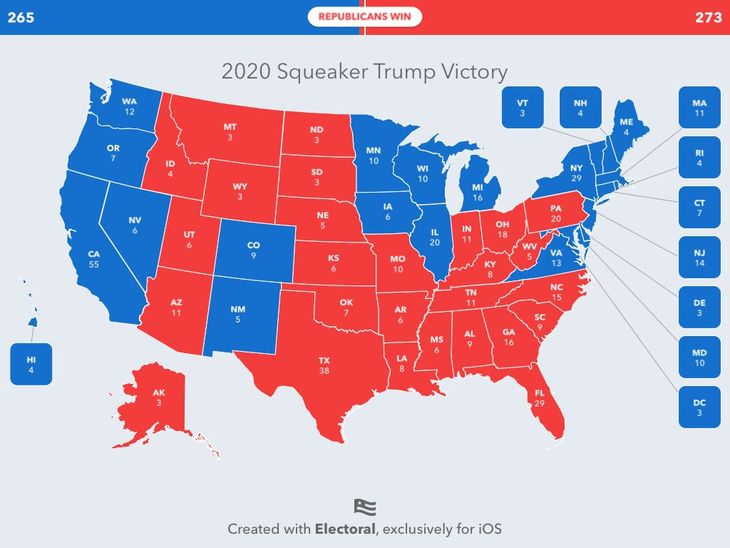 John Podesta War-Games the 2020 Election, and Suggests Biden Might Trigger a Civil War

It might take weeks or even months before we learned the results of a Trump win this close, and hardly anyone on either side would believe there hadn’t been some serious hanky-panky going on.

By the time the dust cleared, the Democrats might have developed the technology to reanimate Ruth Bader Ginsburg — and don’t fool yourself into thinking they aren’t trying.

What this country really needs is an unambiguous Trump victory, one big enough to discredit the Democrats’ radical wing for a generation or longer.

Normally, I have no problem with the Left committing electoral suicide, but Washington has grown too big and too powerful to risk letting today’s Democrats hold the White House and both branches of Congress for even one minute.

The laws and taxes and spending they’ve already promised to whack us with would break the country, and there’s no telling what they might attempt once holding all the reins and drunk with power.

With that in mind, here’s Wargaming the Electoral College Scenario 4: 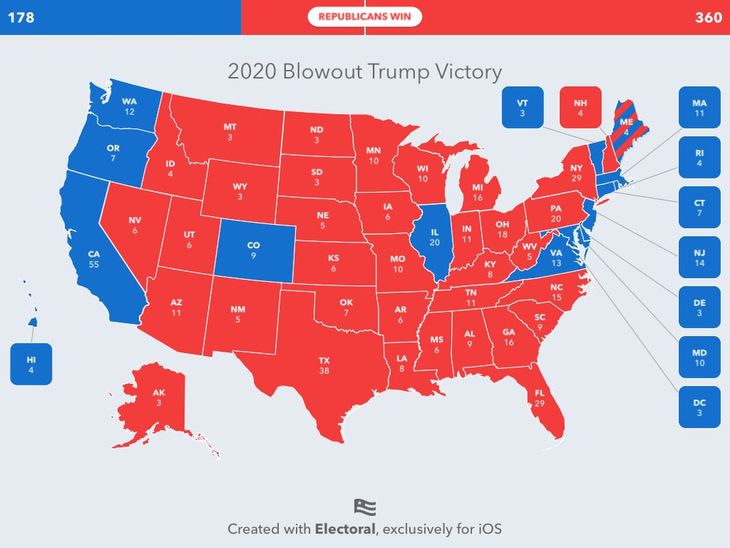 If the Dems can publicly fantasize about winning Texas this year, then why can’t we dream of winning New York?

So many New York City residents have fled the city as a result of the Wuhan Flu that maybe sane upstaters could tip the election.

But no more unlikely than Biden winning Texas, and maybe slightly less unlikely.

Finally, I’d be remiss if I didn’t include one last Wargaming the Electoral College map so outrageous that it just screams “2020, let me see your worst!”

So without further ado, here is Wargaming the Electoral College Scenario 5. 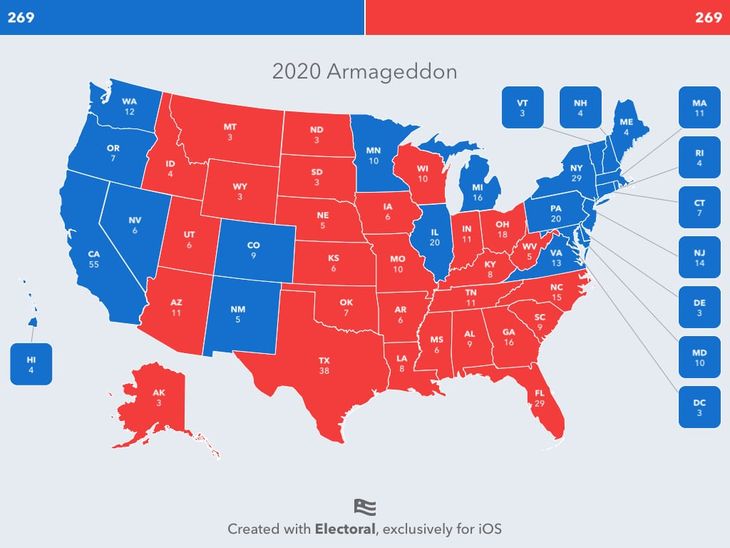 Wargaming the Electoral College will return next week, once we get a better feel for Biden’s support following the first presidential debate.

Yes, I will be drunkblogging the debates.

Steve launched VodkaPundit on a well-planned whim in 2002, and has been with PJ Media since its launch in 2005. He served as one of the hosts of PJTV, a pioneer in internet broadcasting. He also cohosts "Right Angle" with Bill Whittle and Scott Ott at BillWhittle.com. He lives with his wife and sons in the wooded hills of Monument, Colorado, where he enjoys the occasional adult beverage.
Read more by Stephen Green
Tags: DONALD TRUMP JOE BIDEN