Answer: It’s that they’re acting like young people in the military, according to the Puritan Progressives.

PENNSYLVANIA: Rioters have begun to make barricades in front of the police station pic.twitter.com/f3feWI0OA0

PENNSYLVANIA: Arsonists have now begun to light fires in the middle of the intersection in front of the police station pic.twitter.com/dPHTRHPJ6C

PENNSYLVANIA: BLM Rioters end their night with some arson pic.twitter.com/tzLgZUv4vc

What, you might ask, is the excuse for last night’s riot in Pennsylvania?

Andy Ngo tells us that “They rioted because a cop killed a Latino man [named Ricardo Munoz] who charged at him with a knife.”

We can’t believe we have to explain this again for the slow kids in the back, and yet we must.

Anyone thinking of charging a police officer, particularly while brandishing a weapon, should first make themselves aware of these two facts:

What’s that, you say? Everybody knows this already?

Well, yes, of course. You don’t even have to take a special class to understand that police are armed and authorized to use deadly force. These two basic facts are steeped in the culture, as unavoidable as McDonald’s signs or TV ads for Gold Bond Medicated Powder.

Pick up a weapon, rush a cop, get shot, and maybe die.

Insanity Wrap believes that the police can be only as good as the laws they’re required to enforce, and it might therefore be a very good idea if we started removing stupid and unjust laws from the books. With deadly force, if necessary.

But even a “perfect” police force will — and should — use deadly violence to protect themselves and others.

So if there’s a lesson in all this, it’s twofold: Don’t pick up a weapon and rush a cop, and if someone does and gets themselves killed, then that’s on them.

Insanity Wrap is certain that the correct way to honor a violent fool dying violently and foolishly isn’t a riot: It’s a Darwin Award.

Young servicemembers with too many hormones got a little raunchy in their free time?

How will the nation ever survive?

While Insanity Wrap is not actually old enough to remember this (although lately it sometimes feels like we ought to be), the military in World War II actually made propaganda-style movie shorts, posters, etc. about venereal disease.

They understood that lonely, bored, young people sent overseas to possibly get killed would seek whatever outlets they could find, including friendly local girls who might not always use proper protection.

Insanity Wrap says that we could use more of that honest attitude today, and a little less trying to shove young servicemembers into Victorian corsets.

Successfully neutering our servicemembers would have the side effect of neutering our military, which Insanity Warp is forced to suppose is the point.

In a sane world, Black Lives Matter blocking entrance of a hospital to cheer for the death of a 31 year old mother of a 6 year old boy would be the end of a movement. pic.twitter.com/V4bOV3LJ0K

Insanity Wrap believes the problem is that there is a not-insignificant fraction of the country that believes this kind of thing is necessary, good, and just. The larger problem is that there is another not-insignificant fraction in positions of power who believe that this kind of thing keeps them in power and advances the cause of gaining them more power.

The former will crawl back into the hole in which they belong after we stop electing the latter.

Elect the Lawless, Get Lawlessness

So the people of San Francisco elected an out-and-out communist (Boudin was worked as an aide to Hugo Chavez) and must be shocked, shocked that this is the result:

The San Francisco Marina Times has a story about a meth-addicted homeless vagrant who was caught on video surveillance in August burgling a commercial building in the Mission District. Members of the San Francisco Police Department recognized the guy and actually knew exactly where he camped.

It turns out the suspect’s tent was only 700 yards from the commercial building he had just burgled. When police caught up with him, he was not only wearing the same clothes he wore during the burglary, they found 26 grams of methamphetamine in his pockets.

Normally one would say “good work SFPD,” but not SF DA Chesa Boudin. “Boudin’s office found the surveillance video was insufficient to identify the suspect. Boudin’s attorneys deemed that because no DNA or fingerprints were found at the crime scene, they elected not to prosecute either the burglary or the methamphetamine crimes.”

Boudin ran on a platform of “justice reform” that includes “emptying out jails and prisons, and removing bail,” according to today’s report.

Here are the all-too-predictable results:

According to the Marina Times, “Boudin’s lack of prosecutions is fueling a burglary epidemic. Boudin’s term started with a 23% leap in robberies and upticks in burglaries and car break-ins. After the March 16th Covid-19 shutdown, with retail stores closing and tourists and rental cars disappearing, criminals transitioned to stealing cars, starting fires, and committing burglaries. Through the shutdown, as of September 1st, burglaries exploded up 57.6% over the same period last year. (Year-to-date homicides are up 33% under Boudin.)”

In all fairness to the people of San Francisco, Boudin was elected D.A. in an extremely low-turnout off-year election.

Insanity Wrap wants to know: Will they turn Boudin out at the first opportunity, or will the people of San Francisco say, “Thank you, comrade, may I have another?”

Come See the Violence Inherent in the Leftism

Sherrie Smith, 36, of Fountain, CO has been arrested. She's part of an antifa militia & is accused of coming armed to a BLM riot & aiming a rifle at an occupied vehicle. She's also charged w/felony possession of a dangerous weapon, felony menacing & more https://t.co/dHYe5FTiN6 pic.twitter.com/dhLgNZhFNZ

Smith was arrested along with a few others for staging a riot in a Colorado Springs neighborhood known as Pulpit Rock.

For what it’s worth, almost 18 years ago Insanity Wrap and Mrs. Insanity Wrap bought their first starter home in the very same neighborhood. We lived there, happily and peacefully, for almost four years.

Pulpit Rock is just a nice slice of middle-class suburbia, nothing fancy, with most homes built in the 1980s on smaller, quarter-acre lots.

Why, you might ask, did antifa feel the need to show up armed in such a place?

In order to threaten a cop (and by extension, his family) at his private residence:

On August 3, 2020, a group of protestors marched on the home of a CSPD sergeant for his involvement in fatally shooting an armed suspect during a 2019 robbery investigation.

Note: Following an investigation completed by the El Paso County Sheriff’s Office, a Grand Jury determined the officer involved shooting was justified. The Federal Bureau of Investigations also reviewed the case and found no criminal violations.

What may have begun as a peaceful protest, quickly escalated into riotous and illegal behavior.

Sherrie Smith was allegedly one of the ringleaders, and being a local, Insanity Wrap figured we’d look into her background a bit.

It turns out she’s very much antifa, and very well-armed. Her Facebook profile photo was this photoshopped Campbell’s Soup can: 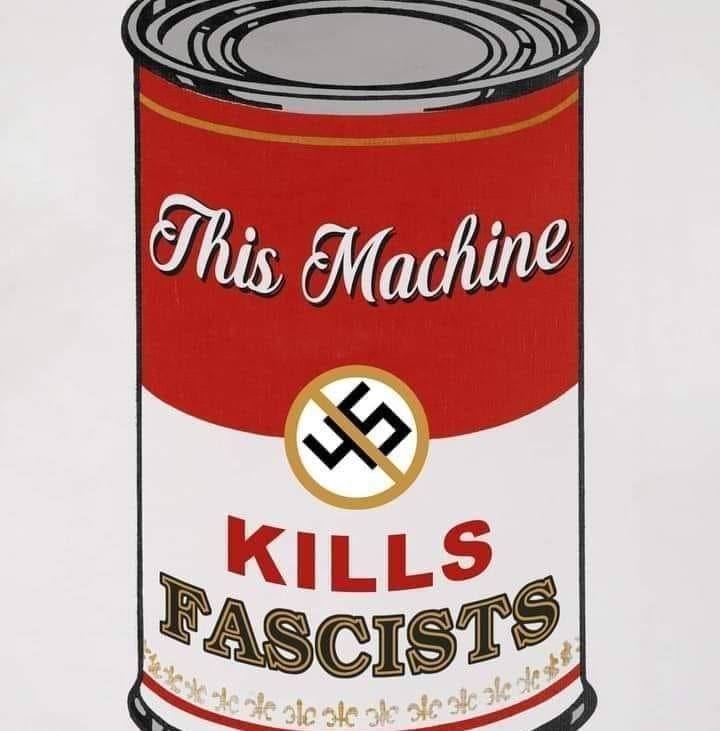 We say “was” because Smith’s profile is no longer on Facebook as of Monday morning. We found the profile and soup image there on Sunday afternoon.

Please note that the label reads, “This Machine Kills Fascists,” and that the logo is a “45” (presumably for Donald Trump, our 45th president) arranged to look like a swastika, and with the classic “anti” bar drawn through it.

If that isn’t a call to assassinate a sitting president, then Insanity Wrap has really, finally, genuinely lost our mind.

We hope that’s not the case since we were hoping to get at least a little more use out of it before we went Full Biden.

Just a reminder that no matter how crazy things get, there’s still sanity left in the world — even in the NFL.

Previously On Insanity Wrap: Where Were You on 9/11, Where Are We Now?