Answer: DON’T FORCE YOUR PATRIARCHY ON MY BXBY, RACIST!

Kristina Narayan was arrested at the Portland #antifa riot where firebombs were thrown at people. She's the legislative dir. for the Ore Democrat speaker of the House @TinaKotek. Kotek recently denounced Portland Police in a letter. https://t.co/4HLjSn67bv https://t.co/fz1dSHF3Bo pic.twitter.com/Y7L48opdMs

Portland was quieter on Wednesday night, if our Twitter feed is anything to go by.

Yes, Insanity Wrap relies on Twitter to get the news out of Portland, Seattle, etc., since the Infotainment Complex (née the Mainstream Media) went Full Sergeant Schultz three months ago.

We did, however, come across this fascinating entry in Andy Ngo’s invaluable research into the rioters — and into Portland’s semiofficial catch-and-release program.

Nick Arama at our sister site, RedState, has more on Kristina Narayan:

Kristina Narayan, who is legislative director for the top Democrat in Oregon’s House of Representatives, House Speaker Tina Kopek, was arrested with 58 others over the weekend during a riot on Saturday into Sunday. Police declared a riot when someone tried to attack them with a Molotov cocktail and lit an Antifa person on fire instead and rioters attacked the police with rocks, fireworks, and mortars toward the officers. Narayan was charged with interfering with a peace officer and released on her own recognizance.

So what was Kotek’s response? None. They didn’t respond to the Free Beacon’s request for comment. And neither Kamala Harris nor the Biden team has given an adequate answer as to why they were contributing to bailing out rioters. So where are the Democrats condemning this?

Children of the Revolution

Inside the privileged lives of protesters busted for rioting in Manhattan

The so-called revolutionaries who were busted for rioting at a New Afrikan Black Panther Party rally took a break from their yacht club lives and modeling careers to be a part of the mayhem.

The seven “comrades” — including wealthy Upper East Sider Clara Kraebber — had their mugshots tweeted out by the NYPD early Wednesday, days after their arrests for smashing storefront windows in the Flatiron District.

Do read the whole thing, although not before you finish today’s Insanity Wrap because it would be crazy if you missed our One Big Thought on our postmodern riot grrls and bois.

There’s a vital economic concept called “pulling the ladder up after you,” and Insanity Wrap believes it explains so much of today’s craziness.

The concept is as insidious as it is simple.

Usually practiced by big businesses, “pulling up the ladder” can be thought of as a kind of rent-seeking. The idea is that once you are successful, you use your influence with lawmakers to cement your position. Lucky you, not only able to climb the free-market ladder to success, but then to prevent potential competitors from using that same ladder to challenge your position.

These riotous Children of the Nomenklatura are doing much the same, Insanity Wrap is certain. They’re less interested in “change” — whatever that means — than in making sure the lower classes will never have a ladder to climb up and challenge their position.

If the cities become hellholes, so what?

If education is just indoctrination, so what?

If crime is rampant, so what?

If opportunity for advancement is crushed… so very nice.

The Children of the Nomenklatura will have their trust funds and private security, and not a worry in the world that some upstart Child of the Wrong People will ever be able to compete with them.

They aren’t crazy so much as they’re coldly calculating little SOBs.

Sen. Kamala Harris: "What's the thing about the ice cream? [Joe Biden] loves ice cream. Tell me about that."

President Obama: "Ice cream is big. Pasta with red sauce, he can go deep on that." pic.twitter.com/7C9RjqvA3j

Kamala loves her fake laugh, did you know?

Barack still loves being on camera in a non-challenging environment, did you know?

Insanity Wrap has no idea why the once-respectable The Hill chose to publish this saccharine bit of faux sweetness, but since we had to endure it, now you do, too.

We apologize, sort of.

France’s Mask Mandate, By the Numbers 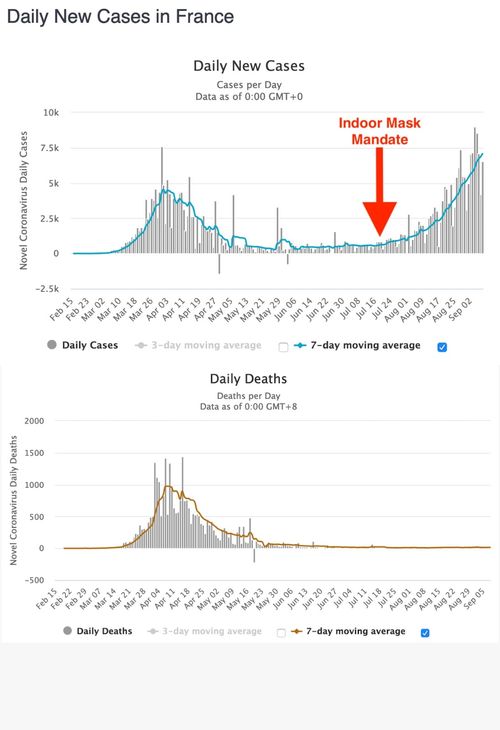 Correlation is not causation, of course. But these numbers do make us wonder if France’s indoor mask mandate was some sort of sneaky, underhanded way of rushing along to herd immunity.

Food for thought, at the very least — and we do enjoy French food.

Madison Cawthorn’s opponent, folks. Had Cawthorn said it, every GOP politician in the country would be asked about it. pic.twitter.com/NPptE2XCL1

For what it’s worth, Madison Cawthorn is confined to a wheelchair following a car accident (he was a passenger) when he was 18 or 19 years old.

If anyone knows a thing or two about getting a spine crushed, it’s Cawthorne.

Davis was both threatening and cruel with his remarks, that the Infotainment Complex would be running with if the parties were reversed.

As to Col. Moe Davis (ret.), Insanity Wrap can only say: “Switch to decaf, sir.”

Although if we were feeling particularly snarky we might add: “Thank you for your service. Now go away.”

“Celebrating a baby’s genitalia is starting to feel very outdated… Given everything we’re learning about gender, gender reveal parties should only happen when the child is old enough to know their actual gender.”pic.twitter.com/PnGm6n80cg

The comedy humor joke is that Noah would have us raise a generation of children who grow up to become self-loathing and confused — and eventually very angry.

Just like the ones rioting in Portland, but many more of them.

Trevor Noah is a highly paid comedy humor professional with a top position in the Infotainment Complex, so Insanity Wrap is forced to conclude that we just aren’t smart enough to get the joke.