Is it Florida Man Friday already?

It’s been a crazy-busy couple of weeks, liveblogging eight nights of conventions over just 11 days.

So instead of wasting your time with a witty intro, how about we just get straight to the titillating action on another thrill-a-minute…

There he goes again…

Florida Man arrested for robbery while out on bond

Last week I brought you the happy tale of three Florida Men who went on a crime spree while wearing court-mandated ankle bracelet trackers following their previous crime spree.

Today I bring you this Florida Man:

The Highland County Sheriff’s Office responded to the robbery near the convenience store on Hammock Road just after 3:30 a.m. After speaking with the victim, they were able to track the crime scene and found Shears at a home on Jacklin Avenue.

Records show Shears was out on bond for an April arrest for felony battery, felony domestic battery, aggravated battery, and possession of a firearm by a convicted felon.

How does anyone ink up their face that much and expect to get away with anything?

Police Officer: Did the man who robbed you have any identifying marks?

Victim: Yes, sir. All of them.

It’s OK to Side with Florida Woman

Florida Woman accused of attacking father due to his relentless farting

Lousiana, Florida Man Has Your Back

Louisiana, FLORIDA MAN IS HERE FOR YOU!!!!!!!!! LAURA, YOU RAGGEDY SHE-DEVIL!!! GET SOME!!!! 🇺🇸 #hurricanelaura pic.twitter.com/CkQgsNAKSj

Lane Pittman is a national treasure.

What Could Go Wrong?

This is exactly the kind of bad decision you expect from a generation that had cable TV growing up.

Why that is, I’ll explain in a minute.

But first, a few details:

Approved by the Environment Protection Agency in May, the pilot project is designed to test if a genetically modified mosquito is a viable alternative to spraying insecticides to control the Aedes aegypti. It’s a species of mosquito that carries several deadly diseases, such as Zika, dengue, chikungunya and yellow fever.

The mosquito, named OX5034, has been altered to produce female offspring that die in the larval stage, well before hatching and growing large enough to bite and spread disease. Only the female mosquito bites for blood, which she needs to mature her eggs. Males feed only on nectar, and are thus not a carrier for disease.

On paper, this is a great idea. If it were up to me, we’d spray literally everything with mosquito-killing DDT up to and including wetlands, small children, and ice cream.

But those of us who were forced to watch ’50s sci-fi movies on the local UHF station growing up because there wasn’t cable TV available know exactly how this ends.

It ends with giant mosquitos killing all the men on the beach and then flying away with bikini girls in their mutant clutches.

So many reasons to back the blue, but so many stories like this one, too.

The Genesis of Florida Man Friday, Explained in Song

This is my new favorite song #FloridaMan pic.twitter.com/nxgw7Ag6hP

That was a thing of rare power and beauty.

Previously On Florida Man Friday: Ever Been So Drunk You Assaulted a Restaurant? 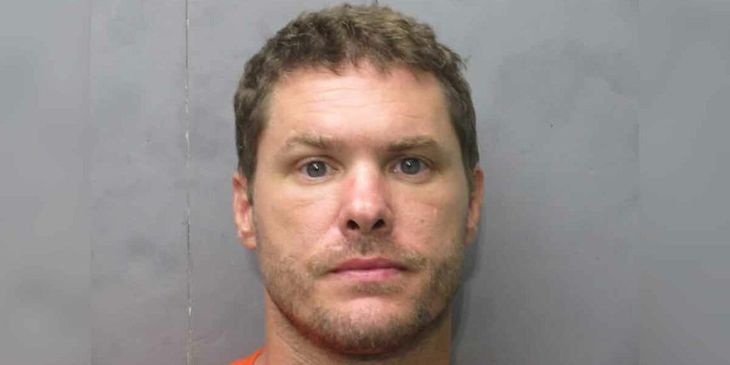 Florida man kidnaps girlfriend, forces her to drive to Keys

There’s a particular kind of woman in horror and thriller movies my wife just hates, and as soon as Melissa pointed her out to me I hated her, too.

Or more to the point, I hate the lazy writers who keep creating her.

Melissa calls her “The Run Up the Stairs Girl.”

The killer/demon/bad-cop/whatever has broken into the house or apartment building, and our victim runs up the stairs to escape.

Except where do you go once you reach the top floor?

Kind of like driving down a dead-end ally during a police chase: You just cut yourself off.

It’s lazy, awful writing, and you can find the Run Up the Stairs Girl in countless movies and TV shows.

Highway 1 that connects the Keys to the mainland is a brilliant feat of engineering and a delightful drive.

We highly recommend if you ever drive to the Keys, that you prepare to spend some extra money to rent a convertible.

But it is, in the end, essentially the world’s longest dead-end street.

Florida Man — our Run Up the Stairs Man — should have known better.

Don’t You Love a Happy Ending?

The shooting happened just after 6 a.m. in an unincorporated area of Auburndale in Polk County, Sheriff Grady Judd said at a news conference. Judd said it appeared the “shooter was perfectly legal to defend her home from a burglar.”

But how about we make it a twofer?

Judd said the homeowner didn’t immediately shoot, but called 911 and tried to subdue the suspect after the 6-foot, 250-pound man crashed through a glass front door, Judd said.

Deputies arrived shortly after and attempted first aid on the suspect “to no avail,” Judd said.

“This homeowner was perfectly justified in what he did,” Judd said, adding that the State Attorney’s Office will investigate and make the final determination. An investigation has been launched, Judd said.

Earlier Friday, Judd said the suspect was screaming erratically, bleeding and, according to one witness, “growling.” The man had jumped on several vehicles and broke at least one windshield; and tried to enter a school bus with at least one child on board, but the driver locked the door before he could get in.

Judd had a busy week, too.

Everybody needs a hobby.

I’m not a coffee snob. I drink mine medicinally, which means it just has to be strong and available very, very quickly.

So color me impressed:

“An AeroPress mixes coffee with a large amount of boiling water and lets it soak for about three to four minutes before pressing the coffee out,” Rabinovich said. “Joepresso uses pressurized percolation to force hot water through a layer of coffee grinds, stripping them of any solids and oils, which takes 30 seconds, like a classic espresso machine. The way it’s extracted gives it a different taste and characteristics.”

I give it about four days before another Colorado Man figures out a way to smoke pot with Joepresso.

Man in Australia repeatedly punches shark to save wife during attack: https://t.co/NAdjGSk5yk pic.twitter.com/uDO1aKwf22

Previously On Florida Man Friday: You’ll Be in Your Bunk