Insanity Wrap needs to know: What do you get when you let an antifa thug play with matches?

Answer: You get a nicely seared antifa thug.

Video down below, but before we get to that, today’s Insanity Wrap also has:

• Portland Mayor Ted Wheeler got a riotous taste of his own medicine.

Didn’t Your Portland Mob Mom Teach You Not to Play with Matches?

Antifa accidentally set one of their own on fire. pic.twitter.com/n5zidmJsVO

In which a peaceful protestor peacefully sets himself on fire while attempting to peacefully burn down a courthouse with peace in his peaceful little heart.

Authorities have identified the would-be self-immolationist as one Mr. Ron Sonol.

Insanity Wrap apologizes for taking you to Portland so often, but it must be done.

Bank robber Willie Sutton is supposed to have said, “That’s where the money is” when asked why he robbed banks.

We have to take you where the crazy is, and these days Portland is the global epicenter of crazy. It rocks a consistent 8.4 on the Bat Guano Scale.

What else would you call it when citizens of the world’s freest and wealthiest country* hit the streets demanding that we implement a system of tyranny and poverty?

*Insanity Wrap will concede that there are in fact countries with a higher GDP per capita than the U.S., like Norway and Kuwait. But when you’ve got maybe three million people sitting on top of oil reserves big enough to fuel up every single 1973 Cadillac Fleetwood ever made and drive them at high speed from New York to Los Angeles and back again 1,000,006 times, it’s hardly a fair comparison.

In fairness to you, no one could have anticipated the degree to which journalism would decline, yet between your toadying for Obama and your conspiracy-addled hysteria over Trump, well, here we are. https://t.co/mtp4CsSxkH

Insanity Wrap would advise Mr. Kessler to just stay down after that one, but the man is as shameless as his “fact-checker” self is biased and dishonest.

You’re Not Paranoid, Communist China Really Is Out to Get You

China Global Television Network (CGTN) issued a nearly six-minute video entitled “Can COVID-19 beat populism?” in which the Chinese Communist Party-run network leverages the coronavirus as “another straw on the camel’s back to expose [Trump’s] hollow politics.”

In addition to attacking President Trump, the video also went after China-skeptic political leaders such as Brazil’s Jair Bolsonaro and Britain’s Boris Johnson.

The video confirms Secretary of State Mike Pompeo’s insistence that China has leveraged coronavirus to its benefit.

Insanity Wrap might not be the best judge of whether propaganda like this video from Communist China’s state media is effective or not. Although it does look to our eyes to be much slicker than most of the crude stuff produced by the Soviet Union.

On the other hand, slickly produced as it is, the video was released two days ago and has fewer than 10,000 views, which puts it behind almost all of the zero-budget Right Angle segments Insanity Wrap tapes each week under our VodkaPundit guise with Bill Whittle and Scott Ott.

On the other hand, as a favor to Barack Obama maybe Netflix will pick it up and develop it into a miniseries.

Appeasement Is Feeding the Crocodile Hoping It Eats You Last

Portland Mayor Ted Wheeler is probably the most progressive mayor in the country, even including New York City’s Bill de Blasio.

What that means is, Wheeler’s performance only rises to Sheer Incompetence on the rare occasions he isn’t actively sabotaging good governance.

That’s basically how Portland went from weird-but-charming to patrolled-by-communist-thugs in almost nothing flat.

The antifa and BLM mob Wheeler helped unleash finally came for him yesterday.

People in the protest crowd react to Portland Mayor Ted Wheeler saying he won't commit to abolishing the police. pic.twitter.com/R0bwOjaG5B

Portland Mayor Ted Wheeler showed up at the riots last night that have been rocking his city for over 50 days. He joined rioters and ended the night bathed in tear gas.
…
As he walked into the crowd, the sounds of drumming and chanting are heard, as they cursed him. Voices can be heard screaming “F*** Ted Wheeler,” and calling for his resignation.

He tried to speak to the crowd, his back literally against a wall, but could not be heard over the sound of people screaming “He doesn’t deserve to speak. He’s a f***ing fascist.”

Wheeler has already promised to cut more than $15 million from the Portland police department, but that isn’t enough for the rioters or Commissioner Chloe Eudaly.

Between them, they’d either make cuts of $50 million or eliminate the police altogether.

As far as the riot mobs are concerned, you’re either with them or you’re a f***ing fascist.

That’s how Wheeler ended up getting driven from the very protest he’d tried to join.

Complains about the stinging feeling of tear gas

It’s hard to lie to the public when only one side attacks you
pic.twitter.com/hcS4D3KVpU

Insanity Wrap would have you note that Wheeler is complaining about his treatment by the Feds, even though it was his own progressive allies who attacked him.

Portland mayor @tedwheeler is escorted to safety by his security team. Angry protesters follow and try to assault him despite his support on the front lines of the riot. They try to go inside the building but is pushed back by Wheeler’s security. pic.twitter.com/xUydADlJEv

Insanity Wrap would also have you note that Wheeler’s personal security team was right there to protect him.

Where will the police be for Portland residents once his budget cuts go through?

Joe Biden Is a Wholly-Owned Subsidiary of Beijing, Inc.

Americans tune in to ‘cancel culture’ — and don’t like what they see.

That’s from none other than lefty rag POLITICO.

Their own numbers were so damning to their progressive cancel-culture allies that the best spin they could put on it was to illustrate the article with a photo of a bunch of flag-waving white people, many wearing MAGA hats.

Because they’re always the bad guys, and in dire need of canceling.

The good news is that the numbers are so lopsided against cancel culture that it’s the vast middle of America, presumably in a rainbow of colors, who have turned against it.

Masks for Thee But Not for Me

Mr. wear your mask not wearing a mask in Georgia. pic.twitter.com/MGPS0ucQNf

Insanity Wrap is going to give Gov. Cuomo the benefit of the doubt on this one, since he suffers from a medical condition in which it’s physically impossible for him to see a camera and not shove his face in front of it.

It’s also our understanding that if you’ve got to go somewhere without a mask, you’d be much better off in Republican-led Georgia than in Cuomo’s New York.

Meanwhile, in a Saner Version of America… 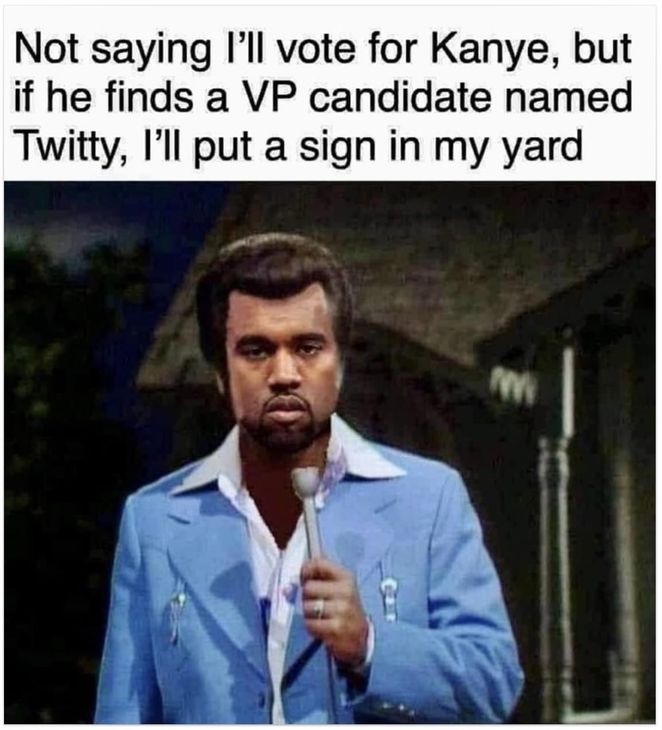 They’ve got our vote.

Come back tomorrow for another Insanity wrap…