Cancel Culture has blitzed the funniest episode of John Cleese’s Fawlty Towers, like Nazi soldiers bursting through the Ardennes Forest to conquer France.

The Guardian reported on Thursday that the BBC’s streaming service, UKTV, will no longer show “The Germans,” as “broadcasters continue to conduct a reappraisal of old content.”

Apparently, the Beeb was just fine with Cleese goose-stepping around like Hitler in the show’s comic finale, but a single utterance of the n-word by a doddering, senile old Army major was more than they could take.

For his part, Cleese is railing against the decision to censor Fawlty Towers. “The Major was an old fossil leftover from decades before. We were not supporting his views, we were making fun of them,” said Cleese.

Cancel culture is not a fan of nuance, however.

ASIDE: Ain’t nobody before today ever called Fawlty Towers “nuanced.”

“A lot of the people in charge now at the BBC just want to hang onto their jobs. If a few people get excited they pacify them rather than standing their ground as they would have done 30 or 40 years ago,” Cleese also said.

We’ll get to the matter of “Fail, Britania” momentarily, but first, you must understand down to your bones that “The Germans,” is 31 of the funniest minutes of TV ever produced by man or beast…

Although the show was slow to take off, it wasn’t long before Fawlty Towers was declared a classic.

Fawlty Towers placed first on the British Film Institute’s 100 Greatest British Television Programmes in 2000. And “The Germans” was ranked twelfth on TV Guide’s 100 Greatest Episodes of All Time.

The purges will continue until the cancel culture is pure, comrades.

I have something of a personal stake in this one. Aside from my family and my dogs, there are only three things I really love: History, trashy movies, and excellent TV.

(Well, also excellent food and drink — but those go without saying.)

Fawlty Towers was and is even now excellent TV, and that maybe is all the cancel culture wokescolds need as an excuse to tear it down.

If somehow you’ve missed it even after all these years, Fawlty Towers was a BBC sitcom from the 1970s, set in a somewhat rundown seaside bed & breakfast named for its owner, Basil Fawlty (played by Cleese). Cleese’s character is a total snob and far too pretentious for such a modest hotel. The tension between Basil’s big ambitions for Fawlty Towers and his modest means — further hobbled by his inept attempts at perfectionism — provides the setup for most of the laughs.

The setup for “The Germans” is, like every Fawlty Towers episode, a complicated exercise in comic farce.

Basil’s wife, Sybil Fawlty, is usually on hand to provide a necessary counter-dose of sanity to Basil’s antics. But in this episode, she’s laid up in the hospital for a minor procedure. Coming to the hotel is a small group of German tourists, whom Basil is desperate to impress because he thinks that having Continental customers will class up the Towers. But he’s also scared to death about offending the Germans, which is why he keeps admonishing his staff: “Don’t mention the war!” 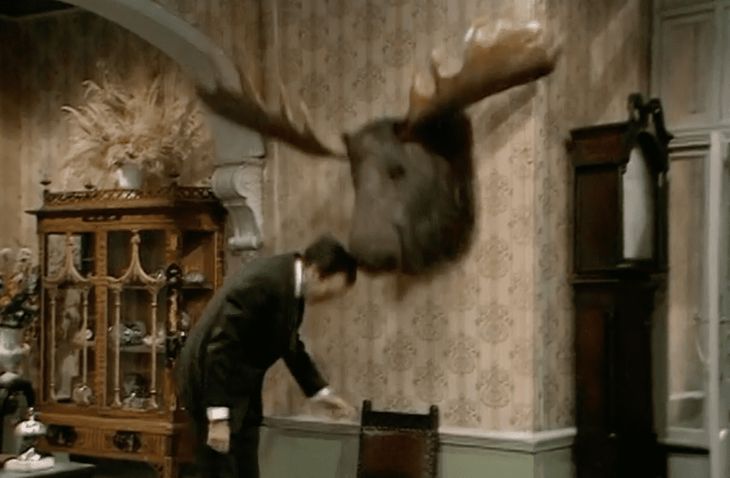 There’s also a stuffed moose head Basil wants to mount on a wall — because it’s so very classy, you see — resulting in the first of several blows to the skull that cause him to behave more and more crazily.

Did I forget to mention Cleese escaped from a hospital just to be at the Towers when the Germans arrived?

Look, I know it’s complicated, but that’s how farce works. And when farce works well, there’s almost nothing quite so funny. It’s like a Rube Goldberg machine made out of laughs.

The cancel culture, however, finds nothing less funny than humor.

As complicated as the setup is, it’s a long, slow windup to a frenetic final act. By the time the Germans arrive — 24 minutes into the episode — Basil, with all his nervous tics and head injuries, is even more of a blathering fool than usual.

Of course, it’s Basil in his typically high-strung way who keeps mentioning the war.

By the time Basil’s German guests have sat down for lunch, he’s completely lost it. His addled brain is filled with nothing but Nazi references.

Ordering lunch concludes with one of the funniest and most politically incorrect bits of dialogue ever written or performed, cancel culture be damned.

One of the Germans is so upset by Basil’s relentless mentions of the war that she’s in tears. Her husband is trying to comfort her and says to Basil, “Will you stop talking about the war?”

Basil replies, “You started it!” but the German husband insists, “We did not start it.”

“Yes, you did. You invaded Poland!”

Like the old Major, blithely unaware that you can’t say the n-word anymore, you’re not supposed to laugh at something like Nazi war aggression, and yet you must.

Only twelve episodes of Fawlty Towers were ever produced, evenly divided over two seasons spread out over nearly half a decade. Maybe because of its small run, each episode is a perfect little gem shaped by Cleese and his then-wife and writing partner, Connie Booth.

Each gem was polished to a high shine by the cast.

The main cast, aside from Cleese, started with Prunella Scales as Basil’s wife and Fawlty Towers’ manager, Sybil. Booth herself starred as hotel worker Polly Sherman. Rounding things out was Andrew Sachs as Spanish expatriate Manuel, who worked as the bellboy and waiter.

Remember Manuel, because he’s about to become very important.

The cast was rounded out by a wacky bunch of recurring and one-off characters, like the dotty Major, each somehow playing on Basil’s insecurities and snobbery. The way those two seemingly mutually exclusive characteristics could get muddled up into one character is a tribute to Cleese’s brilliance as a writer and as a performer.

But the Manuel thing is nagging at me because it’s probably about to become a thing.

Reflecting on Sachs’ comic brilliance as Manuel, I doubt the remaining 11 episodes will be allowed to survive the Beeb’s wrath for much longer.

On his death in 2016, Cleese called Sachs “a very sweet gentle and kind man and a truly great farceur.” He was, but that’s no protection from the woke mob. They canceled the best episode of Fawlty Towers already — you think they’ll settle for that?

Like the actor who played him, Manuel was a kind and gentle character — too much so for his own good. Hardworking Manuel was often the victim of Basil’s wrath and insensitivity, making Fawlty Towers’ Spanish import a completely sympathetic character in every way.

Nevertheless, the culture cancelers will someday — soon, I’d bet — declare that Manuel is an insensitive racial stereotype and demand that the entire series be shoved down the memory hole.

You and I understand that Spanish isn’t a race, but we aren’t dealing with rational people here. We’re dealing with cultural totalitarians who will slap the RACISM label on anything they want to tear down — which is pretty much everything.

Yesterday’s Britain stood up to totalitarians.

For more than a year after the fall of France, Britain stood alone in the world against the combined forces of Nazi Germany and Fascist Italy.

Starting in North Africa, through the tough mountain battles up the length of Italy, and past the Allied amphibious assault at Normandy into the heart of Germany itself, Britain fought with us to liberate half a continent from Hitler and Mussolini.

They didn’t stop there, however.

Threatened almost immediately after the end of the Second World War by Communist totalitarians on the other side of the Iron Curtain, Britain’s Army of the Rhine stood watch alongside us in Germany for half a century in order to keep Western Europe free from Soviet tyranny.

Today’s Brits rolled right over for a tiny internet mob of soy-boi snot-weasels.

Not even Fawlty Towers could get me to laugh at that, and it breaks my damn heart.

UPDATE: Succumbing to public pressure in no small part generated by Cleese’s strong defense of the episode, the BBC has caved. They’ve reinstated “The Germans,” although I suspect this isn’t over yet. Streams of the show may include a stern lecture about naughty words like HBO has gone with Gone With the Wind. And I still believe the Culture Cancelers will make another run at Fawlty Towers because of Manuel.