The latest figures show that 42% of Americans whose deaths have been attributed to COVID-19 were in nursing homes or assisted living centers.

The Foundation for Research on Equal Opportunity’s Gregg Girvan calls it a “startling statistic” that has “profound implications for the way we’ve managed the coronavirus pandemic.”

Perhaps given what we know now, Girvan should have gone with “epically mismanaged.”

Compiled by FREOPP from public sources, today’s COVID-19 numbers serve as a stunning reminder of how badly some states, particularly New York, screwed up by requiring nursing homes to accept COVID-19 victims. Unlike hospitals, nursing homes are ill-equipped and improperly staffed for containing the spread of infectious disease.

Furthermore, it almost goes without saying that nursing home residents belong to one or both of the highest risk groups for COVID-19: The elderly and those with other underlying health issues.

The average varies wildly by state, however. 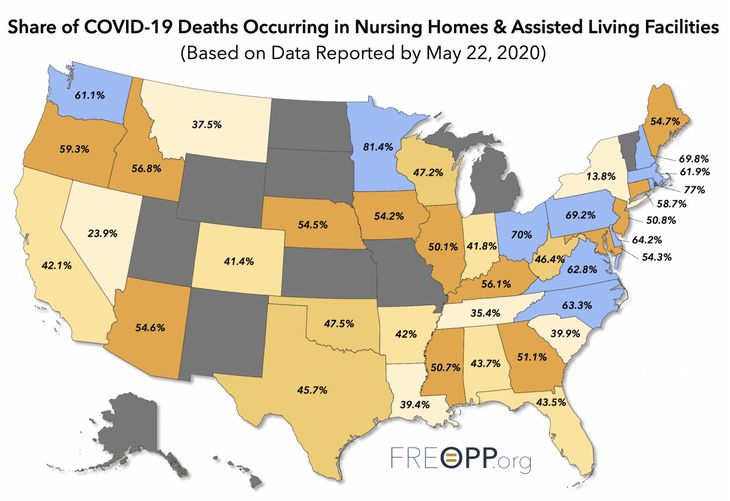 A quick glance at New York State gives you an ugly picture of just how badly that state’s response has been handled. New York Governor Andrew Cuomo practically essentially murdered more than 4,500 nursing home residents by forcing the facilities to accept COVID-19 patients. Nevertheless, New York’s percentage of those lost in care facilities is the lowest in the nation — by far — at 13.8%. 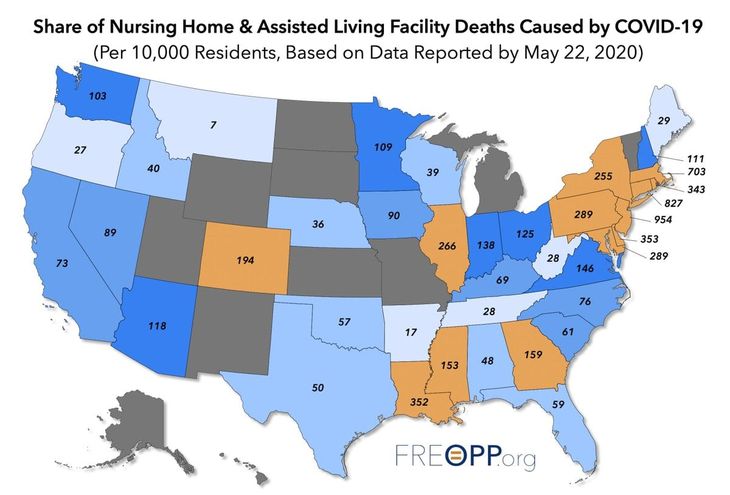 With about one-quarter of all COVID-19 infections and deaths, yet the smallest percentage lost in nursing homes, it’s easy for anyone to grasp just how badly Cuomo and New York City Mayor Bill de Blasio bungled the response. To give you another perspective, New York has lost 255 nursing home residents to COVID-19 per 10,000 residents, among the highest in the nation.

Democrat-run states in the Northeast have done a particularly poor job in protecting their most vulnerable. New Jersey has lost a jaw-dropping 954 nursing home residents per 10,000 to COVID-19, or nearly one in ten. You could walk around Wuhan without a mask, enjoying a deep-fried Bat-on-a-Stick, and probably enjoy a lower mortality risk than a typical New Jersey assisted living resident. Connecticut tells a similar story, with an almost-as-shocking 827 deaths per 10,000 nursing home residents.

Health policy expert Avik Roy noted on Twitter Tuesday morning that if you remove New York from the national statistics, the percentage of COVID-19 deaths attributed to nursing homes jumps to 52%. Roy also reminds us that “only 1.8% of U.S. residents live in nursing homes or assisted living facilities, meaning that people in one of those facilities are 23 times more likely to die of COVID-19 than anyone else.

Twenty-three times — and yet we’re hardly alone in that.

The International Long Term Care Policy Network examined COVID-19 deaths in a whole host of nations, including Austria, Australia, Belgium, Canada, Denmark, France, Germany, Hong Kong, Hungary, Ireland, Israel, Norway, Portugal, Singapore, South Korea, Spain, Sweden, and the U.K. What they found was that about 41% of all their deaths occurred in nursing homes, too.

Clearly then, when it comes to the COVID-19 pandemic, America has just two major risk groups: the elderly, particularly those in northeastern nursing homes, and anyone unlucky enough to live anywhere governed by a Cuomo or a de Blasio.

For those under the age of 65, the crude mortality rate for COVID-19 is estimated to be about 0.09%. That’s about 1 death for every 1,166 people, according to Worldometers. Our last pre-COVID-19 flu season was a particularly nasty one, killing an estimated 80,000 Americans. That’s about 1 in 4,000, but not concentrated so badly among the elderly or nursing home residents.

The data practically demands that we follow Girvan’s advice that “states and localities should consider reorienting their policy responses away from younger and healthier people.” Nevertheless, the chattering classes persist in ridiculous calls for continued or even increased lockdown measures far away from nursing homes specifically or even just the elderly in general.

This lockdown has gone on too long. The treatment of our most vulnerable has been inexcusable.

Both have got to change, now.

The Crisis in Nursing Homes Just Got Worse

Steve launched VodkaPundit on a well-planned whim in 2002, and has been with PJ Media since its launch in 2005. He served as one of the hosts of PJTV, a pioneer in internet broadcasting. He also cohosts "Right Angle" with Bill Whittle and Scott Ott at BillWhittle.com. He lives with his wife and sons in the wooded hills of Monument, Colorado, where he enjoys the occasional adult beverage.
Read more by Stephen Green
Tags: COVID-19 NURSING HOMES