Which brings us to today’s Write Your Own Punchline contest. Here are a few to get you started: 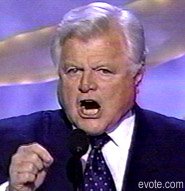 Mr. Kennedy will be hosting the meetings in his small intestine.

You might remember that the Senator failed in his 1980 presidential bid, haunted by memories from 1969, when he swallowed Mary Jo Kopechne whole.

OK, what have you got?