She studied at MIT and at Brandeis where she received a Ph.D in Neuroscience. Thus, she was both an educated and in some sense, a westernized woman. Both her Pakistani-born father and Pakistani husband are physicians who trained in the West, in England and America, respectively; her brother and sister are also highly trained professionals. Nevertheless, Dr. Aafia Siddiqui learned to hate America, hate Jews, and hate Israel right here in liberal America.

Like a small but increasing number of “westernized” Muslim women, Aafia Siddiqui joined her local mosque (in her case, the Roxbury, MA, mosque) and started to veil, and as she did, her ambitions became aggressively jihadic. This is not a contradiction. Obediently veiled Muslim women can be very aggressive, murderously so. They certainly police other women in savage and self-righteous ways in Iran and Indonesia. In Iraq, veiled Muslim women have blown up other Muslim female religious pilgrims. And, Muslim women who were normatively spurned by their mothers were manipulated by Samira Jassim, an attentive, “loving” Iraqi mother-figure, who carefully turned them into suicide killers. 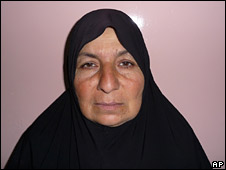 Women are very aggressive—but usually towards other women. I have written about this in Woman’s Inhumanity to Woman. Traditionally, women do not go up against men whom they view as their potential protectors and as more powerful than they are. Ironically, Islamic jihad wishes to reverse, upend, both Nature and human evolutionary history. Just as normatively degraded mothers are “turned” into hero-mothers who publicly praise their suicide killer sons—just so, are normatively self-hating women “turned” into Al-Qaeda heroines who not only directly attack men, but who directly attack infidel male soldiers.

Although Al-Qaeda officially wants its women to breed and bear future male jihadists and to keep the homes and secrets of Al-Qaeda warriors, they have now publicly called for women suicide killers. The West has been threatened with a horde of veiled suicide killers, both male and female.

Today, the Islamic Veil is not a religious symbol—read Marnia Lazreg on this. The Veil is a politically manipulated symbol of jihad. The French understand this and are trying to ban or limit the Islamic Veil, which they view as a security risk as well as a human rights violation. The Americans had better start this conversation now, not later.

Dr. Siddiqui tried to kill American soldiers in Afghanistan after “she’d been captured with instructions on making explosives and a list of New York landmarks in her possession, including the Statue of Liberty, the Brooklyn Bridge and the Empire State Building.”

After jurors found her guilty in United States District Court, Siddiqui turned and faced them, held her index finger aloft and said: “This is a verdict coming from Israel and not from America. That’s where the anger belongs.”

Siddiqui’s lawyers claim that she did not try to shoot anyone, that she was trying to escape, and that secret imprisonment by the Americans had led her to lose her mind and accounted for her continual outbursts in the courtroom.

Some people, including her lawyers, insist that she is “mentally ill.” People are saying the same thing about Major Nidal Hasan, the Fort Hood shooter. He has been said to suffer from a non-existent condition: “pre-post traumatic stress syndrome.”

Siddiqui had continually demanded that no Jews be allowed to take part in her trial. She wanted the jurors to be genetically tested to prove they were not Jewish. I dunno. She sounds like a follower of Adolf Hitler to me. What difference does it make if we conclude that Hitler and his good German followers were “mentally ill”? Even if they were, the harm they did, through both acts of omission and commission, were radically evil and criminal. Caliphate dreams are no different than Hitler’s dream of a Thousand Year Reich.

As soon as Major Hasan was conscious, he invoked his rights to a lawyer. The last words out of Siddiqui’s mouth were: “This verdict is coming from Israel.”

Either we judge jihadists by their own cultural standards (ironically, this is the politically correct position), or we diminish those cultural standards and judge them by our concept of “mental illness” which, in criminal cases, is often used to obtain sympathy for the devil.

Note: In a long article about Dr. Siddiqui, a former MIT student described her as “nice;” Imam Abdullah Faruuq, of the Roxbury Mosque, said “She was an American girl and a good sister.”