Epic Troll: Rep. Lauren Boebert Smuggles Kamala Harris for First 'Appearance' at the Border and You Shouldn't Miss It

When Joe Biden came into office he signed executive orders to undo many key immigration changes that his predecessor, Donald Trump, put into place to secure the border and stop waves of illegal aliens from pouring over the southern border.

Seeing the open borders and forced ending to most detentions by the Immigration and Customs Enforcement, the drug and human trafficking cartels accelerated literal shipments of hundreds of thousands of illegal aliens and any bad actor with enough money across the border. The tsunami of humanity was met by Biden administration officials, who served as overpaid minders and babysitters for the newcomers before connecting them with free rides to begin their new lives as future Democrat voters.

The result of Biden’s moves is a humanitarian tragedy. The border situation is such a disaster that Biden put V.P. Kamala Harris in charge of this circus. Optics are so bad at the border that Harris has never visited, understandably not wishing to be connected with the space-blanketed and caged children and the human COVID Petrie dishes who have come at the Biden administration’s “invitation.”

Watching the farce is Representative Lauren Boebert, who decided to bring the “vice president” to the border in the form of a cardboard cutout of Harris.

And what a troll it is.

The Colorado freshman Republican congresswoman went to the border at McAllen, Texas, and brought a cardboard cutout of Harris with her to highlight “what’s up” at the border. She produced a fundraising video to point out the “devastating reality of what’s happening at the southern border.”

In her video Boebert asks:

Do you know what’s not up at the southern border? Respect for law and order. Funding for our border patrol.

And where’s the media to cover this crisis?

More than 70 days ago, Biden made “cackling Kamala” the border czar, but she hasn’t done a thing to protect the American people. She hasn’t even been down to the border or the tens of thousands of children wrapped in aluminum foil. You can’t just hear about what’s happening, you have to come to here yourself, to understand the devastating reality of what’s happening at the southern border.

So I brought Kamala down to see what her regime is responsible for with their man-made crisis.

Harris traveled to Guatemala this week to urge poor Guatemalans to stop coming. Unfortunately, if the Biden/Harris Administration had not stopped the Trump border policies this humanitarian crisis would have been avoided.

Recommended: How Low Will They Go? Now Washington State Backs Weed Giveaways for Getting COVID Shots

Before she left, Boebert stood up the life-sized cardboard cut-out of Harris and said in a reproving tone:

Now, Kamala, I want you to stand here and see what you have done. 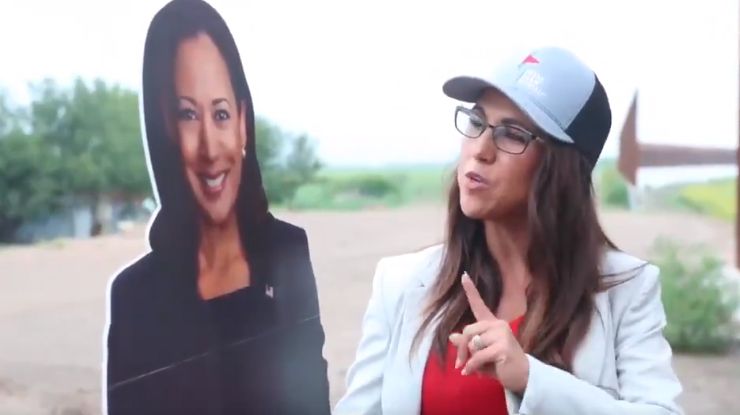 Rep. Lauren Boebert takes cutout of VP Kamala Harris to the border she cackles about never visiting. Image from Twitter video.Then she turned around and walked away.

Boebert continued the troll with later tweets about Harris attempting to deflect questions about traveling to the border by saying, “and I haven’t been to Europe [begins cackling and laughing to intimate that it’s a laughable question] I don’t understand the point you’re making…”

Kamala, you’ve not been to the border. I brought a cardboard cutout of you down there, which frankly has more substance than the real thing, because you‘ve abdicated your duty. As for Europe, you’re going to have to brush up on geography because we don’t share borders with them.

Kamala, you’ve not been to the border. I brought a cardboard cutout of you down there, which frankly has more substance than the real thing, because you‘ve abdicated your duty.

As for Europe, you’re going to have to brush up on geography because we don’t share borders with them. pic.twitter.com/yoY1lCTDWz

Of course, the border crisis is no cackling matter as any Texas, Arizona, New Mexico, or California resident can tell you.

What’s up at the Southern Border?

Since the current regime doesn’t care, I’m going to keep fighting until we fix this border issue.

Donate to my campaign today so I can keep the pressure on Cacklin’ Kamala & her puppet, Joe!