Big-Tech CRACKDOWN: Twitter Just Cut Off the @POTUS Account of the President of the United States of America

Twitter briefly locked Trump’s account earlier this week over bogus allegations that he encouraged violence at the U.S. Capitol.

Other high-profile conservative activists, Trump supporters, and allies have also been banned or seen dramatic drops in their followers. Lt. General Michael Flynn and Sidney Powell were both banned from Twitter earlier Friday evening.

Millions watching the Fox News show “Tucker Carlson Tonight” saw as Carlson read verbatim a tweet from the account of the President of the United States @POTUS and as he read it, it disappeared from the Twitter app. Twitter vanished it and with it the @POTUS account until presumably the Big Tech Lords get the president they want.

I happened to get a screen capture of what likely will be the last Twitter message issued by President Donald Trump.

As I have been saying for a long time, Twitter has gone further and further in banning free speech, and tonight, Twitter employees have coordinated with the Democrats and the Radical Left in removing my account from their platform, to silence me — and YOU, the 75,000,000 great…

Trump’s message was set up for a follow-up tweet, but it was cut off before I was able to see it.

Watch as Carlson tries to read the president’s message as it disappears.

Update: An alert reader managed to capture a screenshot of the rest of the now-deleted thread: 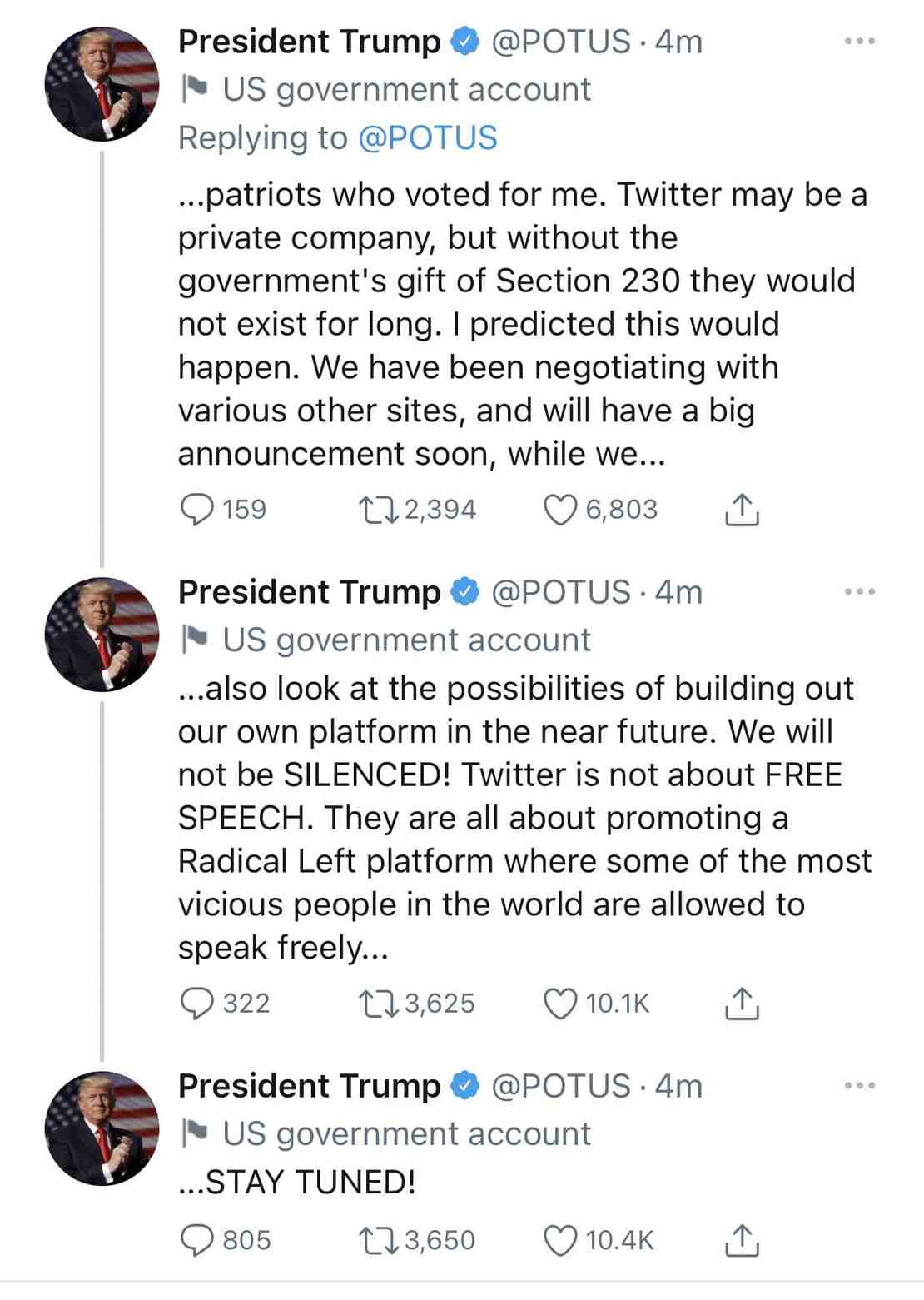 (Twitter screenshot)As I reported at PJ Media earlier, the president was cut off of Twitter, Apple and Google demanded that new social media site Parler be cut off until the social media site censors content to the app stores’ satisfaction, and Michelle Obama demanded Facebook cut off President Trump. As the censorship has intensified, people jumped off the Big-Tech platforms in search of free speech. Now Big Tech is going after those other platforms as well.

The ayatollah and Chinese premier remain on the Big-Tech platforms.

As Mark Tapscott reports nearby, the persecution has begun.

Welcome to the Brave New World.

Victoria Taft is the host of  “The Adult in the Room Podcast With Victoria Taft” where you can hear her series on “Antifa Versus Mike Strickland.” Find it here. Follow her on Facebook, Twitter, Parler, MeWe, Minds @VictoriaTaft