Hilarious: Seattle's CHAZ Is Everything Its 'Woke' Organizers Said They Were Against

If you believe the hype from Seattle’s mayor and her ardent fans at CNN, the six-block Capitol Hill Autonomous Zone (CHAZ) is going to be remembered as 2020’s version of the “Summer of Love,” maaaan.

Eleventh and Pine will be uttered forevermore in the same breath as Haight and Ashbury.

The extortion rackets at CHAZ will go down the same memory hole as bad acid trips, STDs, and Ramparts Magazine in the ’60s.

From now on, the free love, tie-dye, heroin-induced psychedelia to the backdrop of Ravi Shankar and Buffalo Springfield of San Francisco, will be forever linked to spray-painted murals, AK-47s and fu*k the police signs in Seattle. Maaaan.

Mural in #LA celebrating the ongoing protest occupation of 6 city blocks in the #CapitolHill district in #Seattle pic.twitter.com/DYWMFkACYu

Organizers say this place, this new country carved in the middle of Capitol Hill, is peaceful. They are, as candidate Barack Obama once said, the ones they’ve all been waiting for.

Scenes from the #SeattleAutonomousZone or #CHAZ. Beautiful murals. A lot of community. A boarded up Seattle Police East Precinct.

But also – some protestors tell me they feel this detracts from the goal of making strides towards police accountability & ending systemic racism. pic.twitter.com/t2yWPTfYbX

But a closer look at the “autonomous zone” has brought up a few questions.

These anti-American, anti-police, anti-“the man” revolutionaries – these marches-to-a-different-drummer iconoclasts – have some strange notions about how to set up a new utopia. In fact, they seem to be downright confused. The closer we look, the more they reveal they’re everything they’ve been screeching against for years.

CHAZ organizers, the Black Lives Matter, antifa, and other anarchist groups (same people), will lecture you on war, conquest, spoils, and stealing land from Native Americans. And yet they think nothing of stealing this land from the people who paid for it – the taxpayers.

Organizers, who to a man or woman, will say no one is above the law, put themselves above the law by stealing this area and depriving others of their use of it.

Democrats on Impeachment:
No One Is Above The Law!!!!!!

The very first thing the radical protesters – including Black Lives Matter, antifa elements, and anarchists – did was build a wall around their six-block enclave. Need we point out that these same people hate President Trump for simply saying he’d like to erect a wall on the United States’ southern border?

#Seattle #CHAZ I'm shocked to see how they made a #wall to make a #copfreezone looks like #TheWalkingDead governor town, you have the lookout people with #guns the town now wants #SUPPLIES they are growing gardens . Do you really want this to be separated by homemade walls . pic.twitter.com/qKKS3tQQbX

No open borders in Seattle’s CHAZ

The leftists who took over the six-square-block area are the same people who demand the U.S. have open borders, yet CHAZ has no open borders. You must go through a checkpoint with armed guards who will check your ID to determine if you may come in. You may be denied entry on a whim, whether it be because of your color, background, creed, or where you come from. That’s illegal.

The people who live in the area taken over by the radicals of CHAZ are by definition locked in.

In this brief hit of Shelby’s, we air a brief interview from a man stuck living inside the CHAZ zone.

He feels like a prisoner, nearly in tears, he is less than okay with all this. https://t.co/nOsOGD7o3e

No free speech in Seattle’s CHAZ

If you say anything with which the leader of CHAZ disagrees, you may be escorted off the premises. Furthermore, if you speak against the anarcho-collective, such as complaining that you didn’t get to vote on who got to be warlord, you will be hurt.

We were just told by The NY Times this morning it was a free speech zone. Weird. pic.twitter.com/f9s6SFsEaC

That is why this man has asked the media to blur his face during this interview. 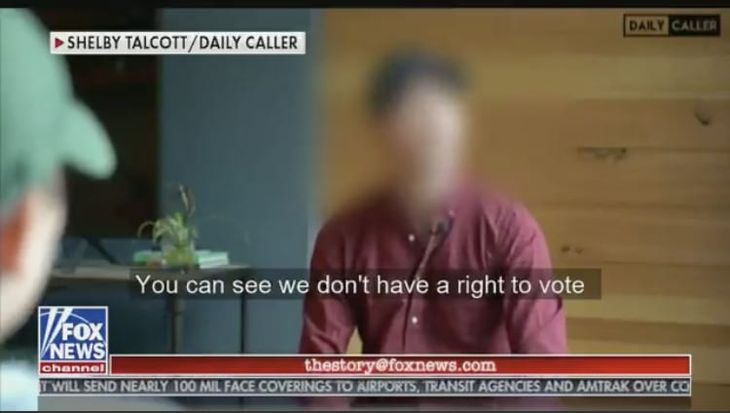 Hey, wait a minute, lefties, we thought guns were inherently bad. We thought cops should not carry them, much less mere citizens. But apparently CHAZ needs to keep order. Imagine that.

The Seattle Times claimed The Post Millennial made up claims that police said there was extortion in the CHAZ. We didn't. https://t.co/5jOGpbXaUD

No free and fair elections in Seattle’s CHAZ

A participant and resident who spoke with The Daily Caller is angry that he did not get to vote on the self-appointed warlord, Raz. He complained about it on Reddit.

Nobody elected this guy

You’ve got to give it to the left’s favorite punching bag, Donald Trump. At least he was elected president of the United States of America. Raz the warlord, not so much. He does look like a benevolent dictator, however.

CHAZ ‘police’ stop-and-frisk those who want to enter

The armed guards of CHAZ basically stop you and frisk you – ask for your papers – without probable cause as promised in the U.S. Constitution. When you’re an American citizen, this is ILLEGAL.

The left moved stop-and-frisk out of polite society a long time ago.

"Border patrol and Stop & Frisk disproportionately affects people like me. We should abolish these practices."

*Self-Appointed Warlord takes over the #CHAZ

"Yo, we gotta stop and frisk unfamiliar people at the border." pic.twitter.com/IJfwT90nuY

If you are white and taking video of CHAZ organizers, you will be escorted outside, while others of other colors or beliefs are allowed to stay.

CHAZ leaders have removed the ability of property owners to use their property as they wish because they have taken it over, blocked people in, and violate the freedoms accorded under the Constitution.

The police precinct has been held hostage to whims of the mob. People cannot fully use their homes because of the encampment around it.

So the Capitol Hill Autonomous Zone (CHAZ) in Seattle…

1. Has erected border barriers
2. Has guards with AR-15s
3. Is checking passports
4. Is checking people before they enter for weapons
5. Has started its own policing force

The enclave’s leaders have already run a shake-down and extortion racket of nearby businesses. The unsaid promise is that nothing will happen to the locals if they’re on the right side of things.

The Warlord Will See You Now. Armed Rebels Illegally Require ID to Get Into Seattle 'Autonomous' Zone https://t.co/z3u9UiFRMn #Seattle#chaz#warlord#RazLord#riot#georgefloydisforgotteninChaz

The City of Seattle is providing CHAZ with toilets, water, and other amenities during the takeover of taxpayer property. But any other autonomous governmental entity would need to put such services out to competitive bidding.

CHAZ is already receiving foreign aid! Maintenance clean up crews and portable toilets! Seems the you and Durkin see this as a developing nation and it must be nurtured it at our expense!

CHAZ does not believe in equal treatment under the law

CHAZ explicitly refuses to allow some people to move into its enclave. That is not equal protection under the law and is otherwise known as “redlining.”

You’re not hippies, you’re not at Woodstock, and you aren’t going to be staying long enough to glean your harvest. This is someone else’s land you’re digging up and “farming” on.

apperently the guys in CHAZ made a farm

The greedy New York City mayor and his sidekick, the cigarette tax collector, went out and stopped – forever – Eric Garner for selling loose cigarettes. Someone is offering to provide cigarettes for CHAZ. They’d better sell them in the packs, or the revenuers might come to get you.

Dear #CHAZ, I will gladly facilitate all this for you.

Here is my Cash app $mzn15, don't forget about shipping and handling. pic.twitter.com/p0sJzpdAlZ

The existence of CHAZ makes everyone less safe

Because the Mayor forced the police to leave East Precinct in the land of CHAZ, police response times have tripled.

Seattle Police Chief: "Rapes, robberies and all sorts of violent acts have been occurring in the area and we're not able to get to [them]." #capitolhillautonomouszone #antifa #BlackLivesMatter pic.twitter.com/Oe5YfVz3uL

The warlord may get ‘canceled’

We learn from colleague Sister Toldyah over at Red State that the new warlord might not be woke enough. Raz the warlord may get canceled because of some tweets that did not embrace gay people.

Raz’s Kingdom of CHAZ is in the biggest gay area in Seattle.

If the CHAZ lefties stay on brand, Raz is gone. However, he does have an AK-47 he slings over his shoulder on the premises, so canceling the rapper could be tricky.

One must react with skepticism and humor at this situation in Seattle. The children in the locked playground have discovered that there’s nothing new under the sun when it comes to organizing people.

They’ve quickly devolved into an authoritarian organization dependent upon fear and intimidation to achieve their ends, whatever those may be. Power is my guess. Or at least some cool selfies, preferably with a raised fist.

It will never occur to them – never – that the system set up by our forbears in America is the finest example of freedom and liberty ever devised in world history.

When the time comes to leave CHAZ, these activists will still spit on the U.S. and will have learned nothing.

FACEPALM: Seattle Mayor Jenny Durkan Says Anarchy in City Could Be ‘a Summer of Love’

The Warlord Will See You Now. Armed Rebels Illegally Require ID to Get Into Seattle ‘Autonomous’ Zone