The Senate Summons the Big Dogs

This was a real whirlwind of a news week, wasn’t it?

It began with the Senate Judiciary Committee hearings to confirm Judge Amy Coney Barrett to the Supreme Court. Those had so much drama surrounding them that there probably weren’t too many people who thought anything else could dominate the news for the week.

After just two days in the spotlight, the confirmation hearings yielded to the story about Hunter Biden allegedly introducing his dear old dad to an executive at the Ukrainian company Burisma. It was a connection that has long been suspected but had remained unproven.

That story got to be the belle of the ball for just a few hours. Mainstream media types quickly put on their Journolist caps and began a coordinated effort to tell people to ignore the story. Not to be outdone, both Twitter and Facebook jumped into the game to restrict the sharing of the story.

Both social media platforms got out over their skis on this one and ended up attracting all sorts of attention from the feds. That attention revolves around something known as Section 230, which Tyler O’Neil explains here:

On Friday, the Senate Committee on Commerce, Science and Transportation announced that it was going to have a hearing that might help with clarification: 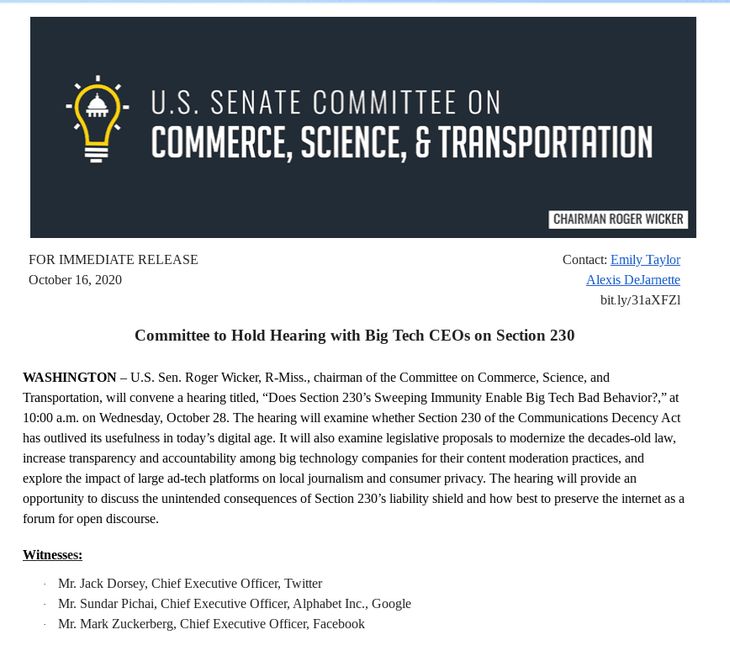 Almost everything pertaining to the regulation of the social media giants was written before social media was a thing. Twitter and Facebook’s roles in news and the political conversation are evolving at a blinding pace. Something needs to be done to figure things out.

This isn’t really a summons to the principal’s office. It’s more of a “We’d like to have a talk about your future” kind of thing.

The irony here — and they know it — is that Twitter and Facebook’s attempts to keep the Hunter Biden story from people made the story blow up.

The spotlight is hot but these three have been there before. They have not, however, faced scrutiny from this many federal angles before. Dorsey and Zuckerberg are probably wishing they could have a complete do-over on Wednesday at this point.

We’ll update you if anything interesting happens with this.

PJ Media senior columnist and associate editor Stephen Kruiser is a professional stand-up comic, writer, and recovering political activist who edits and writes PJ's Morning Briefing, aka The Greatest Political Newsletter in America. His latest book, Straight Outta Feelings, is a humorous exploration of how the 2016 election made him enjoy politics more than he ever had before. When not being a reclusive writer, Kruiser has had the honor of entertaining U.S. troops all over the world. Follow on: GETTR, MeWe, Gab, Parler,
Read more by Stephen Kruiser
Tags: FACEBOOK JOE BIDEN MARK ZUCKERBERG SOCIAL MEDIA TWITTER HUNTER BIDEN