Fact check: there is someone ultimately accountable for our actions as a company, and that’s me. Please leave our employees out of this. We’ll continue to point out incorrect or disputed information about elections globally. And we will admit to and own any mistakes we make.

Per our Civic Integrity policy (https://t.co/uQ0AoPtoCm), the tweets yesterday may mislead people into thinking they don’t need to register to get a ballot (only registered voters receive ballots). We’re updating the link on @realDonaldTrump’s tweet to make this more clear.

Yet, the actual ‘fact-check’ didn’t change a single word on that dimension. For context, here is Twitter’s original fact check: 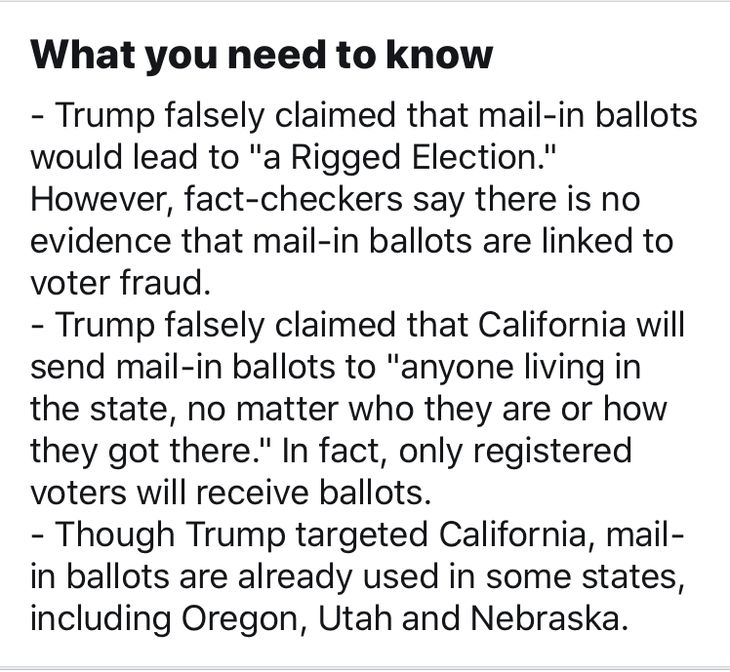 Here is their updated fact check:

The only thing Twitter corrected was their third bullet point, which was incorrect. Nebraska does not engage in mail-in voting. Further, they failed to make an important distinction regarding the states that do. Mail-in voting in most states requires an affirmative step by the individual to receive a ballot. They must register to vote and request the ballot. The president is not referring to these processes.

What is being proposed on a national level by Democrats and in California is a default process. If you are registered to vote in the state, you will receive a ballot. California also has motor-voter registration, which registers individuals to vote when they get a driver’s license. In other words, the individual needs to take no affirmative step to receive a ballot.

California has had issues in the past with improperly registering legal residents, providing drivers licenses to illegal immigrants on the same system, and has significant problems statewide with maintaining accurate voter rolls. They actually do run the risk of sending a ballot to anyone, no matter how they got there, or who actually may have died or moved. This is why the affirmative step by the voter to request a ballot that exists in most current state elections processes is important.

Add the fact that California has legalized ballot harvesting shows that potential for abuse could certainly be asserted. Ballots going out via a push process on outdated rolls to individuals who no longer live at an address can be collected by virtually anyone and returned to a polling site.

The president articulated an opinion that this combination of factors could lead to fraud. There is a legitimate cause for concern. Twitter fact-checked an opinion with their own opinion. Pretty outrageous.

Perhaps not so outrageous if they had disclosed that they are a Premier Partner for a group called Early Vote Day 2020. According to their website:

Vote Early Day is a collaboration among media companies, nonprofits, technology platforms, election administrators, influencers, and other businesses to help all eligible voters learn about their early voting options and celebrate the act of voting early. This collaborative, open-source model – similar to Giving Tuesday and National Voter Registration Day – will ensure that millions more Americans take advantage of their options to vote early.

One of the ideas they are pushing is to standardize voting by mail nationwide. While Early Vote Day 2020 claims to be non-partisan, it is a project of the New Venture Fund, which advocates for a host of progressive polices like a very progressive tax structure and hosts links to the Bill and Melinda Gates Foundation Small Grants Initiative and Global Policy and Advocacy.

Given that Twitter is a media platform supporting an advocacy group, this should have been disclosed in their ‘fact check’ of an opinion. However, Dorsey’s choice of language in his tweet is even more ominous:

We’ll continue to point out incorrect or disputed information about elections globally.

You don’t fact check disputes. You know, those disagreements where people have different opinions? Zuckerberg was absolutely correct to throw shade on Dorsey’s decision. At best it is dishonest. At worst it is a form of advocacy that does not belong in electoral politics.