Ron DeSantis is the latest Republican governor to take on the media for trashing his COVID-19 response. Specifically, he emphasized the lies the media are telling about the data on the Florida COVID-19 dashboard. He had released a full statement regarding the firing of Rebekah Jones.

Jones, the data manager for the COVID-19 dashboard, had alleged she was fired for refusing to manipulate the data regarding Florida’s experience with the virus. DeSantis set the record straight. He outlined the issues with her employment, including insubordination: 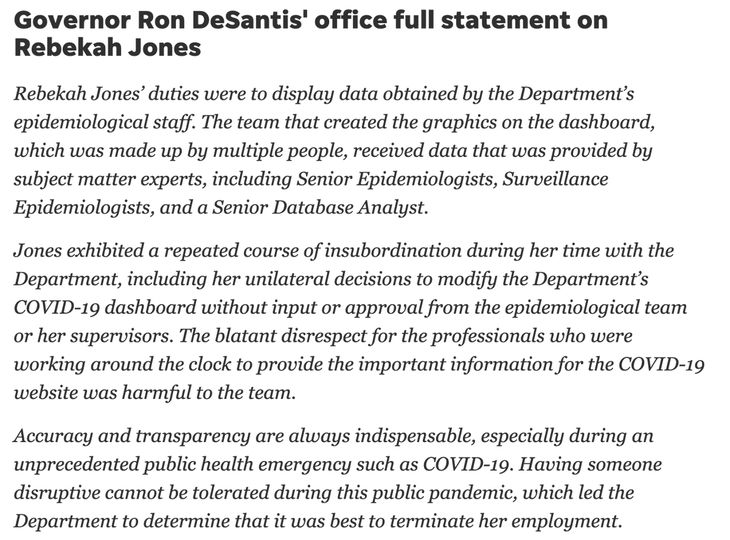 When questioned by the media while exiting a meeting with Vice President Mike Pence, DeSantis knocked it out of the park. He took the media to task for their coverage of Florida’s response.

Dr. Deborah Birx was extremely complimentary of Florida’s public dashboard when the reopening phases were presented. She actually called it a model for other states to follow to ensure citizens could get the information they needed. The media may not have heard her because they were too busy blasting governors like DeSantis who refused to take heavy-handed lockdown measures.

Yet those same governors are having success reopening their states. Yesterday, the media-maligned Georgia Governor Brian Kemp noted the number of hospitalizations in his state was continuing to decline. There has been a 34% decline since to May 1. Texas Governor Greg Abbott joined the fray and shamed his blue state counterparts in epic fashion with a single graph.

In the graph, Abbott noted the success DeSantis had seen in Florida, as well. As the Florida governor pointed out in his rant, Sunshine State’s low mortality rate is especially notable given the number of visitors he received from overseas hotspots. The state was also key in assisting the government in returning affected travelers from infected cruise ships.

While the media was freaking out over pictures from Spring Break on Florida beaches, DeSantis was issuing a statewide order to ensure COVID-19 patients were not returned to nursing homes while they were still infectious. He also issued a statewide order on March 16, 2020, severely limiting visitors at nursing homes and assisted-living centers. Maybe focusing on the at-risk population and not on a lot of healthy 20-somethings on the beach is a model other states should consider. Looking at you Michigan, Pennsylvania, and New York.

DeSantis and his public health leaders had another hurdle. Florida has a higher percentage of the population of permanent residents that are over 65 than the other three states on Abbott’s graph. The Sunshine State also welcomes thousands of so-called “snowbirds” every year, who were still in residence in March.

Older residents tend to live in the southern part of the state. DeSantis relied on local leaders to take appropriate precautions. Like his Republican counterparts in the South, he understood Jacksonville isn’t Miami and managed the state accordingly, leaving many issues up to local leaders. He has handled reopening the same way.

DeSantis summed it up perfectly. The corporate media looks for issues in red states that are successfully reopening because it wants the efforts to fail: