Matt Yglesias Suggests That Dems Back Kasich for Senate. It Did Not Go Well. At All.

Left-wing media critter Matthew Yglesias had an interesting suggestion for Democrats where the Ohio Senate race is concerned: Back former Ohio governor and thrice-failed GOP presidential candidate John Kasich for the seat being vacated by Republican Sen. Rob Portman.

Yglesias said he was just trying to be provocative when he tweeted: “What if instead of backing someone good for the open 2022 Ohio senate race who will almost certainly lose to someone terrible, we backed an independent bid by John Kasich who would probably win and in office serve as a check on democratic backsliding?”

You can have him, bro. Good luck with that. https://t.co/wzfkZAkwku

Kasich has been making overtures to Democrats in recent years, speaking at the Democratic National Convention and becoming the left-wing media’s favorite go-to NeverTrump “Republican,” but if Yglesias’ Twitter feed is any indication, it’s not working. At all. 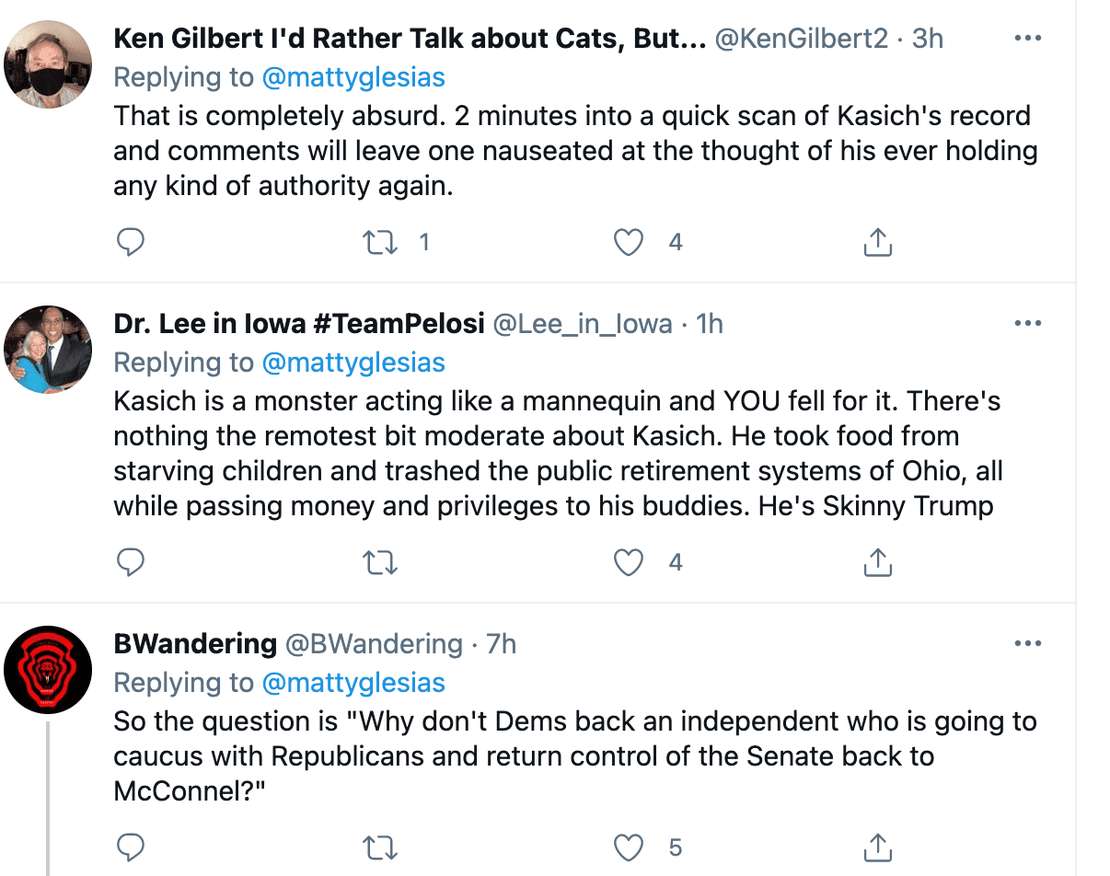 Oh, and let’s not forget that Kasich is close to disgraced Lincoln Project pervert John Weaver.

The main problem with John Kasich running as a Democrat (or an Independent supported by Dems) is his long record as a Republican. The radical pro-baby-killing wing of the party despises him because he signed a handful of pro-life bills into law (though he vetoed the Heartbeat Bill) and union supporters hate him because he initially backed (and signed into law) a government-union reform bill before backing down in the face of criticism when it came before voters in a referendum initiative. Kasich is the poster child for How to Lose Friends and Influence No One.

GOP Gears Up for a Fierce Primary Battle to Replace Outgoing Sen. Rob Portman. Here Are the Possible Contenders.

The problem with Ohio Democrats is that they’re terrible at winning elections, which is why some would perhaps consider backing a nominal Republican. It’s been a decade since a Democrat has won a statewide office in Ohio, and they’ve got control of both houses of the legislature. Despite its reputation as a swing state, Ohio still leans heavily Red except for a few pockets in the Big 5 urban cities. Yes, left-wing loon Sherrod Brown keeps winning his Senate races, but that’s only because he’s held elected office in Ohio since I was in the fifth grade and people keep voting for him out of habit. That, and he projects himself as a moderate, and people continue to buy his schtick.

My money is on Congressman Tim Ryan being the Democrat nominee in 2022. Like Brown, he acts like a moderate while backing the entire flotilla of Pelosi-AOC radical policy proposals. The Atlantic dubbed him Congressman Moonbeam a few years back for his hippie-dippie plans to use the power of his office to integrate “mindfulness into key aspects of our society.”

Ohio Republicans have a deep bench and several candidates have already dipped their toes in the water, indicating they’re likely to run, including former GOP chairwoman Jane Timken and former state treasurer Josh Mandel. Former President Trump had reportedly been leaning toward an early endorsement of Timken, but, according to Axios, was “talked out” of it by RNC Chairwoman Ronna McDaniel. Also potentially in the mix are Congressmen Jim Jordan and Steve Stivers, former Congressman Jim Renacci, and current Lt. Gov. Jon Husted.

Part of me hopes Democrats do back Kasich. Not only would it divide the perma-minority party in Ohio, but it would also make the election a cakewalk for whichever Republican prevails in the primary.