This report is part 26 of an investigative series looking into reported corruption in family courts. For the rest of the investigation visit the catalog here.

In the constant battles in family courts, where court-appointed professionals have immense control and power over the lives of litigants, intimidation tactics are run-of-the-mill. PJ Media has been following a case in Washington state where several court professionals have ganged up on a father and his children, who don’t want to be reunified with their mother. According to court records, she left them when they were toddlers for a life of drugs and crime.

In the latest attempt to intimidate the children into complying with forced “reunification” with their estranged mother, therapist Cynthia Buckley called the police to report that the children were “not listening to their mother” during a therapy session. In the call to police, Buckley reported, “The mom asked her daughter to put the phone down during therapy and she wouldn’t…so she basically tried to remove…to take the phone. That kind of went into a little wrestle over the phone and then her son came over and put his hands on her hands to wrestle…I told them, ‘take your hands off your mom or I’m going to call the police.'”

Then she said something that sounded like a legal strategy for the mother: “I just want it documented…they’re having court Wednesday, so they don’t try to say she assaulted [them].” Buckley said several times during the call that she just wants to create a “record” of the event to be used in court. “I just wanted it documented,” she said again, “I kind of expected something like this to happen… like they don’t have to listen to their mom.” No injuries were reported and no police came to the scene.

Burkhart reported that his children were crying and upset when he picked them up from the session.

Is it a legitimate use of police power to get children to cooperate with a parent over something as common as disputes over phone time? If that were the case, most parents would overwhelm the police with calls for help with their teenagers with phone addictions. Worse, is creating a police record on two vulnerable kids—going through one of the hardest times in their lives due to forced therapy they don’t want—the right thing to do? Is this an ethical therapeutic technique?

Placing a higher significance on contact with both parents over the feelings of the parties or the actions of one parent that led to the estrangement, the guardian ad litem (GAL) in the case, Shannon Moreau, and the reunification therapist, Buckley, have worked in coordination to force the teens into a relationship with their mother. Moreau is on the record in emails demanding that the father, Jacob Burkhart, use coercion and punishment to force his teens to interact with their mother. “When the kids refuse to go into the house to do therapy, what has been done to coerce them into compliance?” she wrote to Burkhart, encouraging him to punish them in order to make them obey the court. 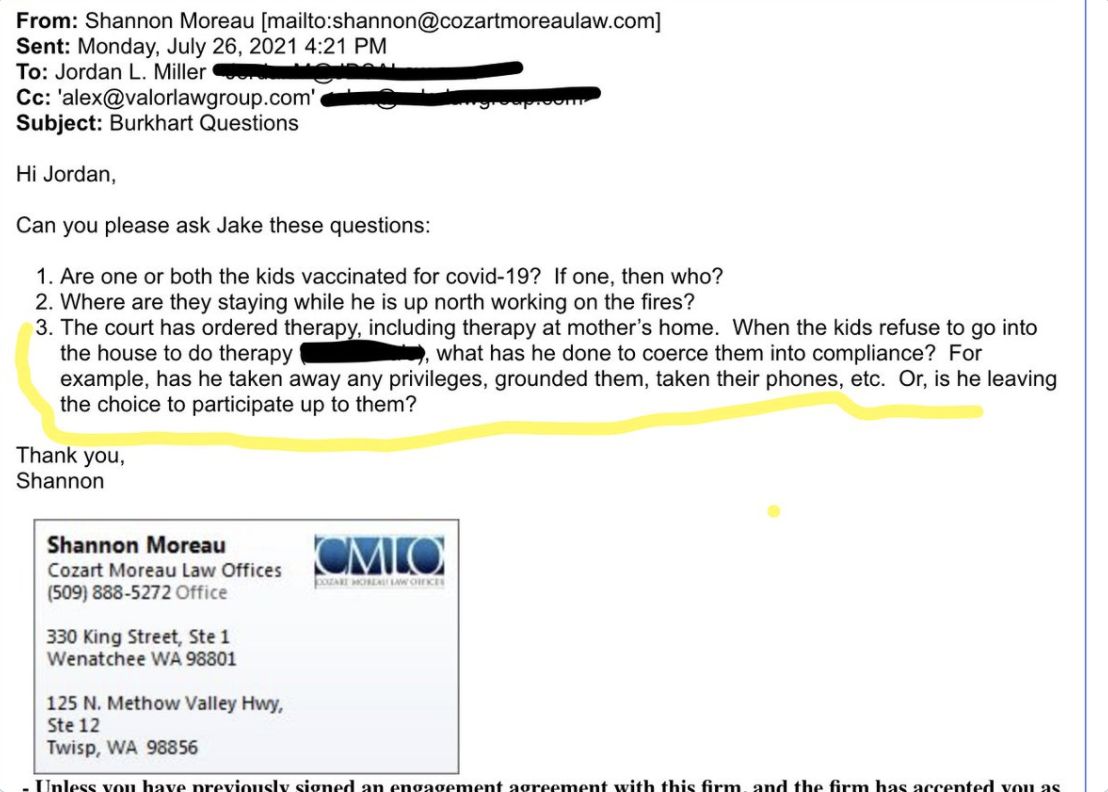 PJ Media also reached out to Dr. Michael Gombatz, owner of Severn Psychological, who provides therapy in cases like these in Maryland. After reviewing the tape of Buckley calling the police on her patients, Gombatz offered alternative advice.

Rather than threaten the police, the therapist could treat the phone as a metaphor. The children are saying to the mom, “We would rather listen and talk to people on our phone… because of what you did to us.” The therapist could  ask the children if that is the message they want to give to the mother—  “Because of what you did to us and how you treated us,  we choose the phone over you.” That might have opened the door for mother to acknowledge her failure as a mother, express her drug problem and abandonment and could express she understands why the children did not want to listen to her.

The mother could then say to the children, “That is what I have to change if you are going to pay attention to me and not the phone.” Then the therapist could have explored what she has to change to make you want to hear your mom, instead of [playing] on the phone. The therapist should have also directed mom or not allowed her to get physical with the child who had a phone and was doing nothing dangerous. When mom and child got into it, brother came to sister’s rescue. There was no need to get physical over the conflict. That is something one does not do, unless it is dangerous, and only if dangerous, call police.

Dr. Gombatz’s approach would be a welcome dose of common sense that Buckley doesn’t seem to possess. Instead, her approach has been identical to GAL Moreau’s approach—coercion and intimidation. Dr. Gombatz told PJ Media that coercion is not a useful tool in therapy or family law.

“Any coercion will FAIL by an attorney, judge, therapist, and even the caring parent, in this case, Dad,” he said. “The children have had no control and must be given the dignity of control,” he continued. “Kids in control, unless horribly damaged, will generally move in a positive direction.” Dr. Gombatz lamented the lack of reunification therapists who understand this concept. “Because this approach is not followed, reunification therapists fail more often than not,” he said.

Unfortunately, experienced and empathetic therapists willing to listen to children are hard to come by.

Attorney Sean Kuhlmeyer who practices in Washington and is very familiar with family court, having suffered through his own protracted divorce case, reviewed Buckley’s phone call to police and called it unnecessary. “You’ve got a therapist who is supposed to be garnering trust in this family to help them move forward and what does she do? She’s calling the police on a child,” he said. “What she did was poor judgment and lack of insight into what the ripple effects are from doing that.”

Kuhlmeyer expressed concern that making calls like this to police is not only a waste of public resources but can also be a sign of creating a false narrative that will have long-lasting effects on the family.

“It could be the beginning of creating a false evidence chain,” he said. “She’s making mountains out of molehills”

“In actuality, one person calling the police lots of times is not evidence there’s a problem with anyone’s behavior. It’s just evidence that they called the cops a lot,” he said. “But it can create an ‘impression,’ and in family law, it’s all about how things are ‘perceived.’”

Kuhlmeyer said the rules of evidence allow Buckley to document any incident during therapy without using the police to do it. “She could have written a declaration and filed it with the court,” he said. Kuhlmeyer expressed concern that Buckley’s action further traumatized the family. “Even she admits that there was no assault that happened so there’s no need to call the police at all.”

PJ Media has uncovered many allegations of court professionals around the country escalating conflict in order to keep their billing hours high. These kinds of tactics are well-documented both in our reporting and in the well-known documentary “Divorce Corp” as well as by ABC News.

In this case, Buckley has also been caught taking diagnostic advice from a non-licensed “life coach” without a college degree who specializes in “parental alienation.” The Buckley conspired with her to diagnose the children with “child psychological abuse,” naming Burkhart—who has never been described by the court as anything but a loving father—as the perpetrator. The purported expert, Dorcy Pruter, was paid by the mother in this case. Parental alienation has been called “junk science” with “no evidentiary basis” by many psychology experts, including the American Psychological Association. The email is important because prior to Pruter’s involvement, both GAL Moreau and Buckley were accusing Burkhart of being a “parent alienator.” After Pruter’s involvement, they conspired to accuse Burkhart of being an abuser to avoid the problematic term.

These “investigative” journalist [sic] is part of the flying monkey brigade of delusional peeps trying to claim alienation is junk science. This should reinforce even more for you, the GAL and most importantly Cynthia [Buckley] the importance of using proper terminology. If Cynthia needs anything for assessment and diagnosis let me know. I provided her a lot of information as you know, so hopefully she got what she needs and she avoids using any of the terminology pf [sic] parental alienation…I am not talking about alienation, I am talking about child psychological abuse DSM 995.51. 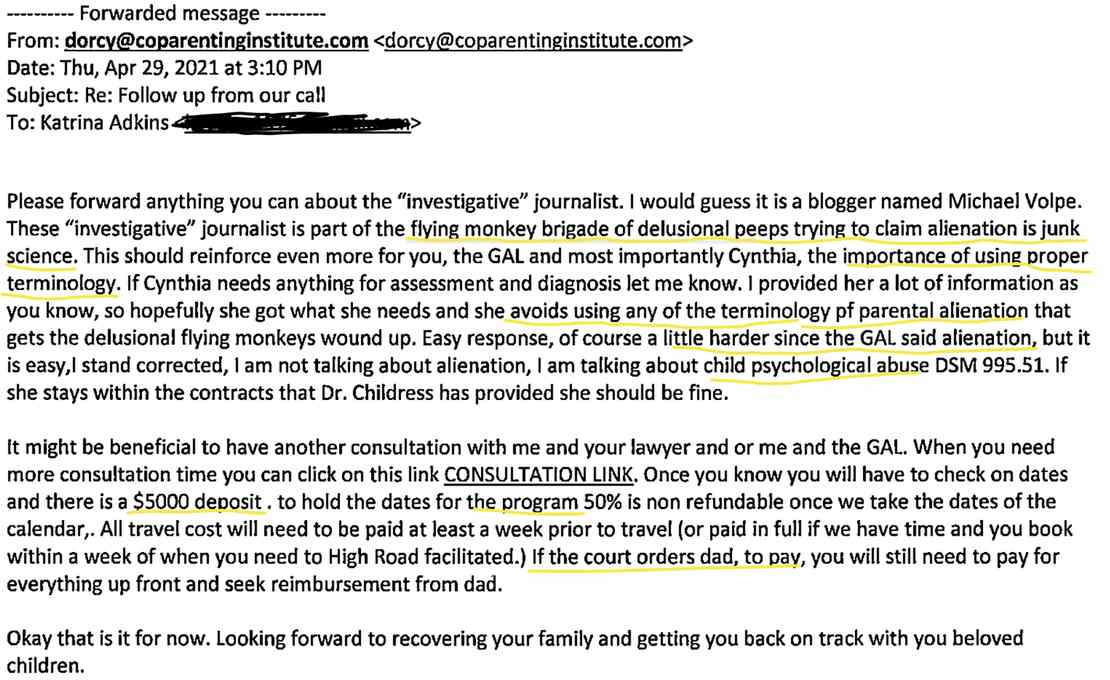 Kuhlmeyer also pointed out that the trauma inflicted on the children by Buckley’s call to police shows a lack of care by court professionals who should be trying to deescalate family dysfunction. “It’s ridiculous! She’s a trained therapist, she should know that what the goal for a court-involved family should be is to deescalate conflict and trauma, help the family transition, and help the family get out of court involvement, not have more.”

Burkhart has submitted a complaint to the Washington licensing board that holds Buckley’s therapy license alleging mistreatment of his children and bias against him. The investigation is ongoing. Burkhart has also tried to inform the judge in his case that the court-appointed professionals are showing bias against him, but his concerns have been dismissed. His case has recently received a change of venue and will be going before a new judge soon.

PJ Media reached out to the Wenatchee Police to find out what was done with the information provided by Buckley but received no answer by the time of publishing. We also sent a press inquiry to Buckley, but she refused to respond.