In yet another example of poor leftist fiscal management, Crosstown reports that the city of Los Angeles now spends more money on traffic and parking enforcement than it collects from traffic fines. That’s right, our leftist leaders continue to lose money writing traffic tickets in one of the world’s most car-crazy cities.

“Over the past five years, fines from parking tickets have brought in over $617 million to the city of Los Angeles,” said Crosstown. “But over that same time, the department in charge of writing those tickets ran up costs of more than $809 million in salaries, equipment and other expenses.” In other words, that means parking and traffic enforcement cost the city of L.A. $192 million more than was generated in revenue from traffic tickets. 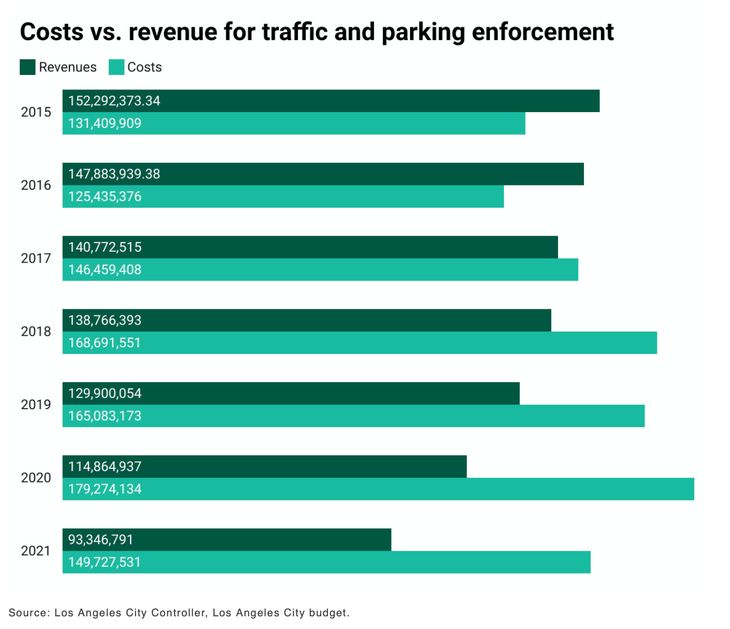 And no, the ticket revenue shortfall did not begin with the COVID-19 pandemic. It actually began way back in 2017 and “became particularly outsized in the last two fiscal years,” notes Crosstown. “In those 24 months, the parking and traffic enforcement division spent almost $121 million more than it took in through citations.” In the heart of the pandemic there were fewer people living and working in the city itself, so that meant fewer “expired meters or blocked fire hydrants,” but that brief time doesn’t explain the continued shortfall. And officers had the “added duties of monitoring COVID-19 testing and vaccination sites,” but other factors must also have contributed to the decreasing ticket revenue.

“Over the last decade, while revenue from citations has remained within a consistent range,” Director of Transportation Colin Sweeney wrote in a statement to Crosstown. “Our parking enforcement division also provided a record number of traffic safety control hours for citywide projects, including street repair and maintenance, the construction and expansion of Metro Transit projects, and homeless encampment clean-ups.” While each of those man-hours certainly increased the department’s costs, I can’t help but notice several glaring omissions: traffic control and law enforcement for each of the many “spontaneous” and “mostly peaceful” BLM/Antifa riots, traffic disruptions, and so-called protests held throughout the city over the same period of time.

Recommended:  Homicides Are Way Up in Biden’s America. Is That What the Left Wanted?

The main responsibility of the L.A. Department of Transportation (DOT) officers is “to ensure the safety of our roadways and support the quality of life of our communities,” not increasing the city of L.A.’s revenue intake. Perhaps if the DOT officers were able to spend more time performing those duties instead of babysitting BLM/Antifa thugs while they destroy our communities, we’d all be better off. And let’s not forget that the leftist-led BLM/Antifa embrace of the “defund the police” movement and the demoralization of our officers directly contribute to the “estimated 22% of traffic enforcement positions” currently open. Although ongoing hiring efforts continue, there remain more than 70 vacant positions in the DOT alone.

It’s telling that the BLM/Antifa costs are overlooked, and it’s beyond time the city of L.A. took a  long hard look at its priorities and policies that led it here in the first place.

Gwendolyn Sims is a freelance contributor to PJMedia where she covers current news, politics, and culture. She is based in Southern California—for now—but her heart remains in Real America.  Follow her on Twitter and Parler.
Read more by Gwendolyn Sims
Tags: LOS ANGELES POLICE