So How's Biden's First Week Going? A Side-By-Side Look At What He Promised Versus What He's Doing

It’s been less than a week since Joe Biden’s inauguration. In that time, how has Biden’s campaign rhetoric matched his actions in office?

I’m not fooling around with “pants on fire” or childish Pinocchio ratings like the legacy media does (but, outrageously, won’t now that Biden is in office). He either lied or he didn’t. As adults you can make up your own minds.

During the campaign, Biden promised that he had a plan to “change the course” of the COVID pandemic.

But once in office, he admitted that “there is nothing we can do” to change the pandemic’s course (trajectory is a synonym of “course” as used here). 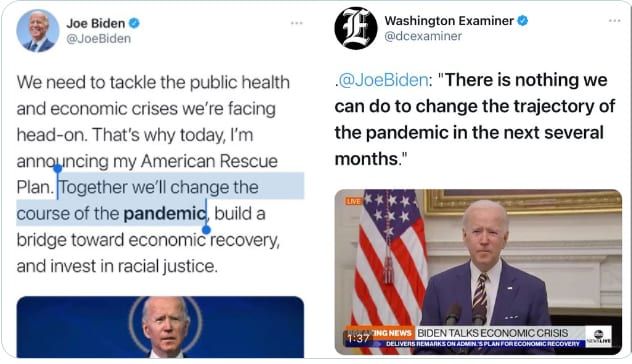 During the campaign, Biden said he would not ban fracking. Understanding this requires some set-up.

Any federal fracking ban would impact activities on federal lands, which are a minority of the overall land from which oil and natural gas are pumped. Natural gas tends to be a by-product of oil production, and both tend to require fracking in order to extract profitable quantities of each. The American Petroleum Institute says about 95% of U.S. production involves fracking.

The private vs. federal land issue is an important distinction. Some will use it to argue that Biden has not “banned fracking” despite taking actions that effectively do in fact ban fracking where a president has the power to do so. A president does not have the power to ban all fracking all over the country on private or state-owned land, not without congressional action. But a president does have the power to ban fracking on federal lands, by issuing orders against the permitting and leasing activities that enable fracking, and in some states such as New Mexico and the western states, that’s quite a bit of very productive land. Oil and natural gas activities shift and change every day, with rigs going on and offline in response to productivity, and new rigs being permitted to begin operations. The nation’s active rig counts are constantly changing and that’s trackable as permits. I used to track them in a previous job. So when a presidential candidate says he will or won’t ban fracking, that’s federal land in play, not private or state land, and the ban comes in the form of halting leasing and permitting activities for oil and gas production.

The Permian Basin, America’s most productive oil and gas production field, straddles the New Mexico-Texas border. It’s federal land on the New Mexico side, but Texas owns the public land on its side. That’s due to how the two states entered the union. Texas was previously a republic, and kept its publicly-owned lands — million of acres, which have turned out to have quite a bit of oil underneath. Private developers also own some Permian land on the Texas side. New Mexico was a territory before statehood, and kept very little public land when it became a state. The feds gobbled it up. So if Biden were to break his promise not to ban fracking, his ban would cover Permian land in New Mexico, while it would not impact Permian Texas much if at all. Both states heavily rely on oil and gas revenues to fund public education. Turn off the oil (by taking action against fracking) and you may be turning out the lights or the Zoom connections for the kids. In Texas, you’d end textbook funding and you would significantly impact the Public University Fund, which funds the University of Texas and Texas A&M systems. But Texas owns its public Permian land; New Mexico does not.

During the campaign Biden promised he wouldn’t ban fracking. Kamala Harris promised both that she would and, once she was on the ticket, that Biden would not.

.@JoeBiden will not ban fracking. That is a fact.

But was that a fact? On day one of his administration Biden signed a record 17 executive orders and one of them imposed a 60-day moratorium on all oil and gas related leasing activity and permitting actions on federal lands. That’s a temporary ban on fracking, with an eye toward a permanent one. The fact that he imposed it in an executive order on day one indicates that he planned this action even while promising no ban. Sorry, New Mexico and Pennsylvania!

New Mexico officials profess to be shocked at Biden’s actions and will now scramble, as the oil revenues pay for a massive share of the state’s education and other budget items are in jeopardy. State budgets are already hurting thanks to the pandemic. Now Biden is squeezing New Mexico’s budget hard while he cannot similarly squeeze Texas despite the fact that the two states pump oil from the same huge oil field.

The fact that New Mexico voted for Biden — and Texas did not — is not really funny, but it is kind of funny. 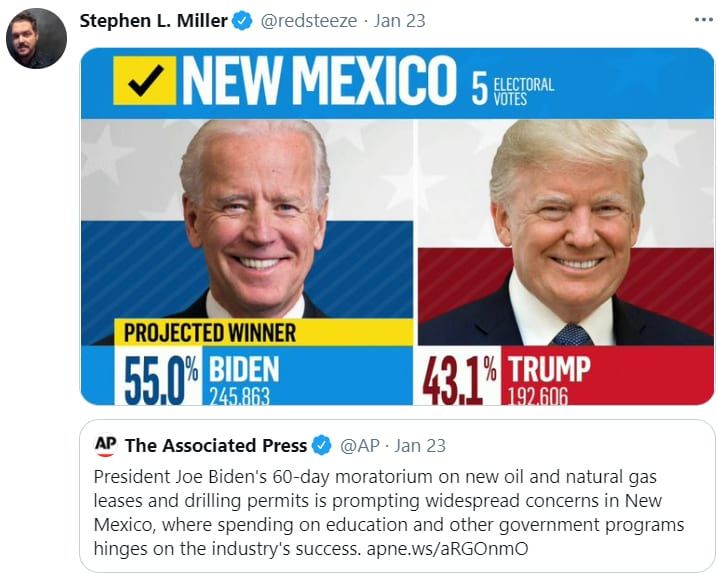 Perhaps trusting a career politician not to lie to you was not the best course of action to take. 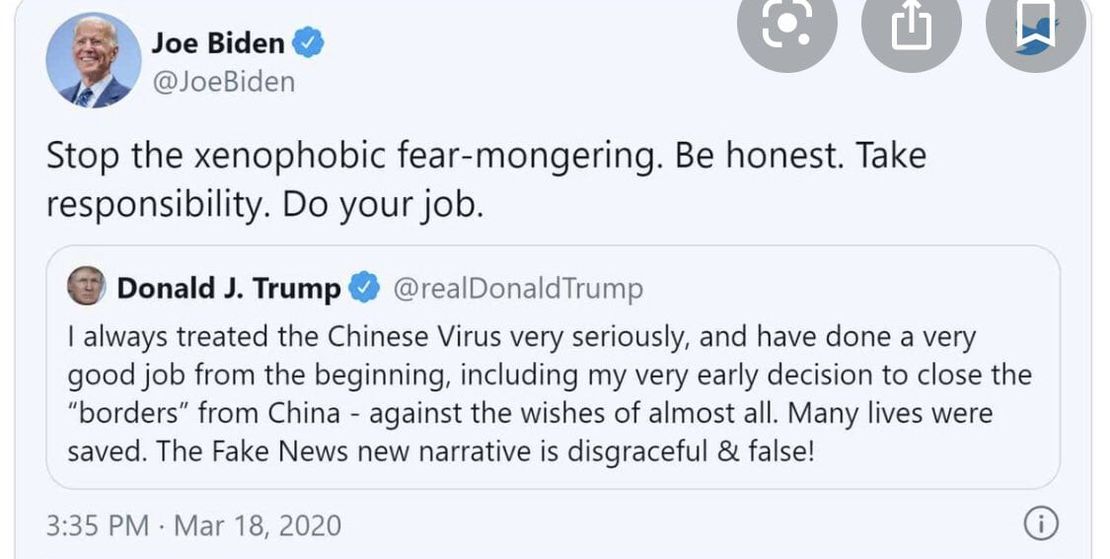 Biden later added more racism to the stew, contradicting those who claim he tweets more nicely than Trump. He’s a toxic tweeter who just doesn’t get called out on it by Twitter or anyone else.

As president, Biden is imposing his own travel bans. 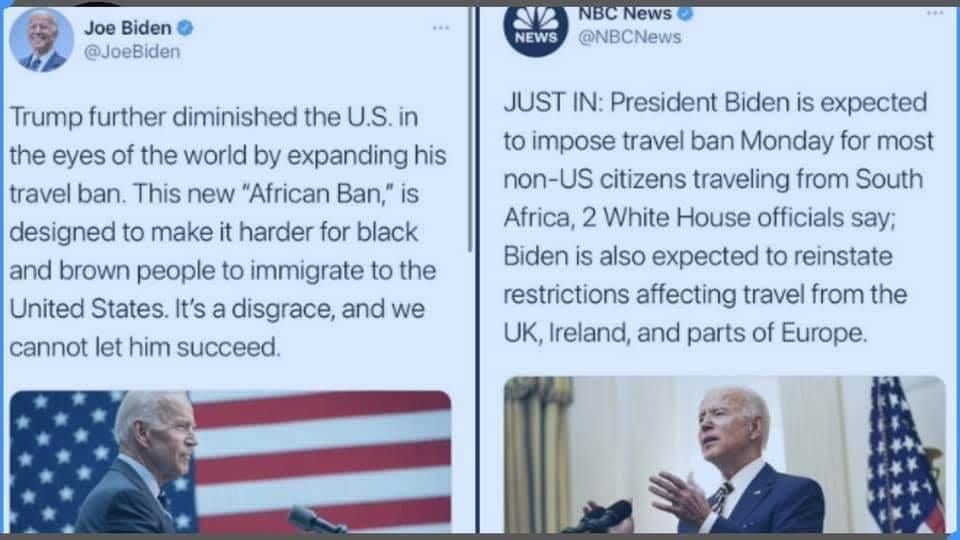 It’s a pity the candidate version isn’t around to rage tweet at the presidential version of Joe Biden. The latter probably barely even remembers the former at this point.

Joe Biden just wanted America to be respected again. Instead, China is rattling its saber at Taiwan.

The first was on Saturday, shortly after Beijing cheered Donald Trump’s exit from the White House. 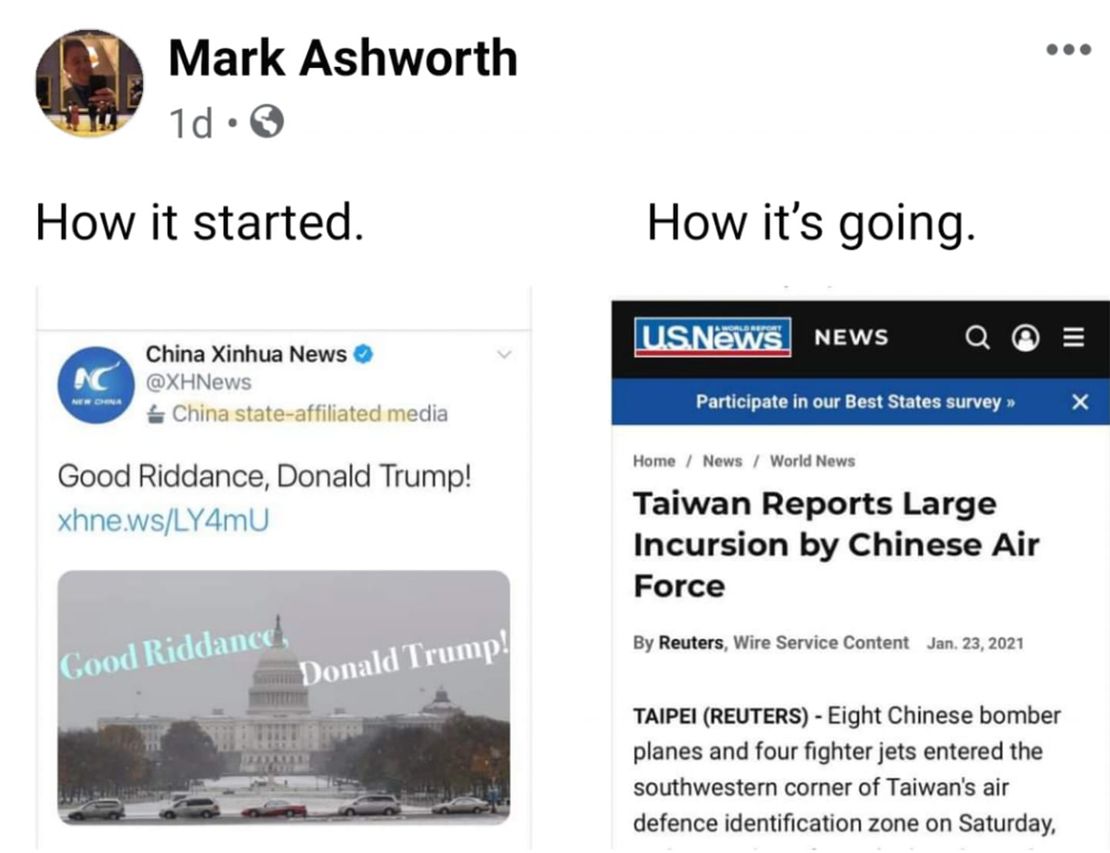 On Sunday, China sent a larger military flight into Taiwan’s airspace, according to the New York Post.

China sent warplanes, including fighter jets and bombers, into the South China Sea, breaching Taiwan’s airspace for a second day on Sunday —  provocations that come as a test in the early days of the Biden administration.

Biden’s administration did respond by sending an aircraft carrier group into the area. China’s two incursions into Taiwan’s airspace don’t seem to be all that respectful of the new commander in chief.

And for what it’s worth, we’ve got this to look forward to.

Biden reiterates his plan to get to an average of 1 million vaccines distributed per day within the next three weeks. According to the Bloomberg tracker, as of last week, we are distributing an average of 1.16 million doses per day. https://t.co/NL3XVlMWzg

That’s a partial look at how it’s going less than one week into Biden’s presidency. Great work, everyone.