Remember when Rep. Alexandria Ocasio-Cortez (D-N.Y.) was amazed by a garbage disposal and the idea that you can grow food in the ground? Many of us tittered and guffawed. As it turns out, she is not an anomaly. According to a poll from SWNS digital, 81% of college grads wish they had been taught more life skills before graduation. Instead, they learned the importance of pronouns and social justice activism. It seems that many students leave a college clueless about budgeting and what to do when you can’t afford DoorDash.

The learned helplessness churned out from our universities seems intentional. College grads who leave school without life skills are more willing to rely on the government. According to the poll:

Conducted by OnePoll on behalf of Experian Boost™, the survey found 81% of respondents agreed they wish they were taught more life skills before graduating college.

The top things pollsters feel left in the dark on included how to invest, long-term financial planning, and the best ways to manage their student loan debt. A further three in 10 regret not learning how to budget.

Nearly one in five (17%) college grads polled still don’t know how to cook or do their own laundry. Twenty-six percent are also feeling lost when it comes to basic apartment maintenance too – like unclogging a toilet or resetting a Wi-Fi router.

The excellent news is that Gen Z (born between 1997 and 2015) appears to be more financially savvy than their older cousins. I credit their Gen X parents for raising them right:

According to the Center for Generational Kinetics (CGK), 12% of Gen Z workers have initiated their retirement savings, while 35% plan to begin saving in their 20s. “These are people that are 23 years old and younger, and they’re already saving for retirement,” notes Jason Dorsey, a global researcher at CGK who specializes in the Millennial and Gen Z workforces. “They’re doing more comparison shopping, they’re shopping more in thrift stores, they were the ones that have the emergency accounts.”

They are also less likely to believe that a four-year degree is the only path to success and are wary of the financial burdens of college. Based on the survey of college grads, they may be on to something:

How intent are high school students on pursuing four-year degrees?

According to a new report from Minnesota-based ECMC Group and VICE Media, only 25% of the 3,000 Generation Z teenagers they surveyed believe the traditional college model is the only pathway to getting a good job.

Only about half of those polled said they are likely to pursue a four-year plan. With their options increasing and with uneasiness over their own financial futures growing because of the pandemic, this next wave of education seekers is poised to have vastly different outcomes than their predecessors.

With nearly 10 million open jobs that so-called adults and college grads—who are receiving enhanced government checks—won’t get off the couch to take, companies are hiring these young go-getters above entry-level positions. In some industries, such as retail and food service, high school students are taking entry-level management positions. Why take a four-year break if an organization is willing to give you a shot?

Even before the pandemic, an employer taught my Gen Z child how to manage inventory and purchasing in a retail environment. That child is anticipating a career with an occasional college or technical class to teach a particular skill. More employers should be concentrating on on-the-job training paths with occasional credentialing.

A college degree is not the safe bet it used to be and, according to a 2018 survey, employers already realize that. A university degree is no longer a proxy for capability or even a level of innate intelligence, due to the focus on equity and diversity requiring a lack of objective admission standards. In reality, it is not only life skills that college grads lack. It is basic professional competency: 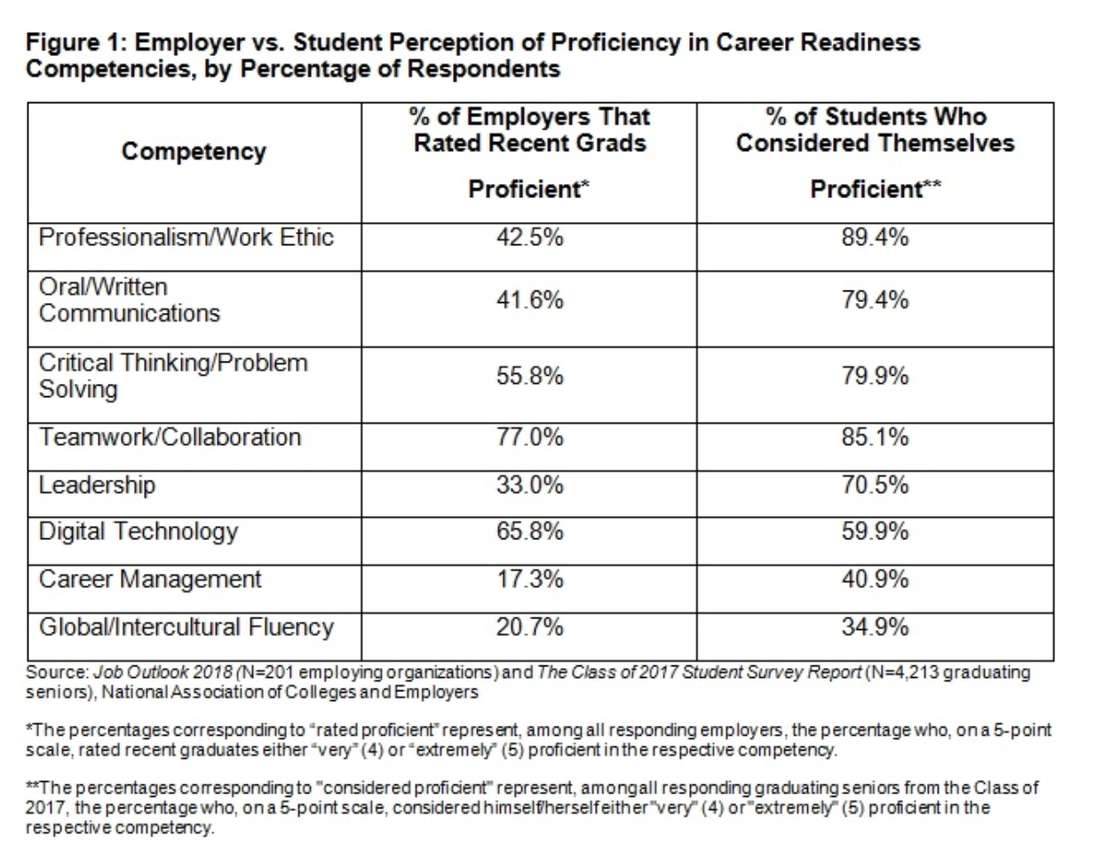 In the near term, maybe Zoomers will have an entrepreneurial opportunity teaching their perceived intellectual betters how to manage their money, budget, and do a load of laundry. Perhaps they can talk the 43% of college grads worried about paying for grad school out of it and encourage them to get real jobs. If Gen Z can force employers to bust the higher education bubble by refusing to buy into it themselves, it may be their most significant contribution to the republic’s future.