From the Avengers to Coyotes and Nylon Rope: Blue-Check Ignorance and Intolerance Threaten Freedom and Our Way of Life

Last week the Twitter blue-check mob tried to cancel one of the nicest and most decent people on the planet: actor Chris Pratt.

His crime? Pratt exercised his freedoms of speech and association by declining an invitation to publicly support Joe Biden. Twitter’s little hate engines went to work on him, until the Avengers actors assembled and clapped back at them. Robert Downey Jr., Mark Ruffalo, the whole gang who defeated Thanos (an environmentalist extremist, by the way) on the big screen stood up for their friend Star-Lord, and good for them. It’s all too easy for actors to just go along with whatever nonsense the blue-check chuckleheads come up with. Actors tend not to be the most morally courageous lot. If they were, Harvey Weinstein would never have happened.

All in all, it was a good ending to yet another moment of mass stupid in 2020, but the moment should never have had to happen. Silence is speech (not violence). When you’re arrested, the cops even tell you that “you have the right to remain silent” as part of your Miranda rights. In that case, silence is a defense against self-incrimination. Silence can also be a defense against groupthink, and it can be an assertion of your basic human right to be left alone.

Pratt’s decision to keep his mouth shut is not only one that many more of the famous should exercise, it literally lines up with the First Amendment to the United States Constitution.

What if the Avengers actors hadn’t defended Pratt? Would we have seen cancel culture destroy a good and decent man not for saying something offensive, but for saying nothing at all? Probably.

Recent blue-check stupidity doesn’t stop at the Avengers’ defense of the Bill of Rights. During the final presidential debate, President Trump brought up the issue of “coyotes” smuggling people across the border. Twitter idiots erupted with guffaws. Because they’re stupid.

Someone went and gathered blue-check reaction to the president’s factual and accurate coyotes remark. It would be hilarious if it wasn’t so tragic.

A couple of those blue-checkers are actually famous. Peri Gilpin, originally from Waco, Texas, played Roz on Frasier. Lexa Doig has starred in a few B-grade and below TV series and movies.

As both of them and all Americans ought to know, coyotes are human smugglers and traffickers. They charge poor people exorbitant sums of money to get them into the United States against our laws by whatever means their evil minds may devise. Coyotes do not care about the welfare of their customers at all. They care about cash and breaking laws. They tend to move the human cargo in the backs of trucks and in conditions that subject them to the real threat of injury and death. No food. No water.

Coyotes are very bad people. They are also fixtures on the border and have been for ages. Trump was right to bring them up during the debate. That he was mocked for it betrayed the arrogance and, again, stupidity that is rampant across the blue-check mob and across too much of our culture. Blue-checkers are not better than the rest of us. They tend to know a whole lot less than your average American. But they were probably handed trophies for doing nothing when they were kids, they’ve been treated like demigods for landing a TV role at some point, and the “I’m the center of the whole universe!” mentality stuck like flypaper.

Let’s look at one more example of blue-check ignorance from the past week.

Joe Biden promised to “transition” the American economy off of fossil fuel even while he lied that he never said he’d ban fracking. None of what he said was coherent. All of this is a big deal. Biden and his leftist cohort are threatening to force Americans into a very different way of life from the one we currently enjoy and which has lifted billions — billions — out of poverty. This really ought to be a larger issue in this election, but we can count on the malevolent media to ignore it.

It’s not just that stopping the American energy industry would badly hurt several energy-producing states such as Texas and Pennsylvania. It would do that for sure. It would also badly damage our national security — remember all that “No War For Oil!” stuff a few years ago? Notice how the rise of U.S. energy has coincided with not having to go fight wars for oil anymore? That’s no accident. The more of our own energy we can produce here, the less we have to care what overseas despots who live atop lakes of oil do. No more wars for oil, thanks to the wildcatters and engineers who make American energy plentiful and cheap — and to Trump, who had the wisdom to get American policy out of the way.

Ending U.S. oil would directly destroy millions of jobs, not just in energy. It might also spell the end of many products we take for granted. Do you have anything made of plastic? You do, and it probably has dead dinosaurs in it. Plastics depend heavily on petroleum. Your Tupperware, your car (even if it’s electric), your computer, your smartphone — pretty much everything you own, actually — has petroleum in it. Take a look at this infographic from Visually and pay attention to the products on the sides. They all depend on oil. 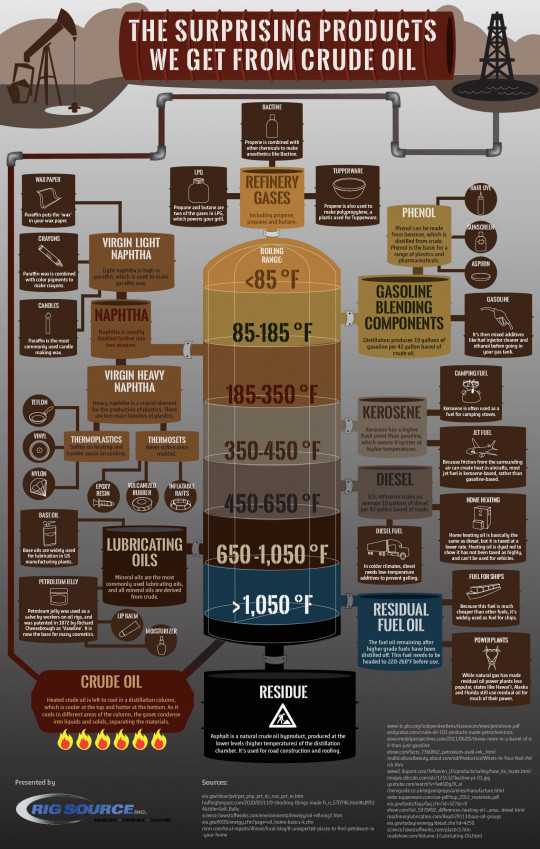 Petroleum is key to making far more products than shown here. One who does not know and acknowledge this really does not have an informed opinion on the role of fossil fuels in our economy and way of life.

Likewise, one who does not know about those smugglers — which have been called coyotes for decades now — on the border really does not have an informed opinion about border issues.

There’s no debating either of these facts. It’s like having an opinion on the Dallas Cowboys’ odds of going 8-8 again (if they have a good season by their recent standards) without even knowing what a football is.

But the blue-checkers cannot be bothered with facts. Some of them, despite their abject and quite stubborn ignorance, get elected to office.

This tweet came from the minority whip in the Georgia state House. She crafts and passes laws.

Did @realDonaldTrump just say 545 kids they can't find their parents for came over through "cartels and coyotes"?! How the hell does a coyote bring a whole human across the border?! Lord—–stop talking. #FinalDebate

How can a coyote “bring a whole human across the border?!”

In the poorly ventilated back of a truck, and with no food or water, usually.

Coyotes, as noted above, are really, truly, bad people. An informed public would revile them as a modern-day version of the slave traders of old.

The left’s combination of self-righteousness and arrogant ignorance pollutes our public discourse, threatens our fundamental rights, and may yet be the death of our freedoms and our republic.

The Avengers can only do so much.

You Still Can’t Take the Sky From Me: ‘Firefly’ Shines in the Age of Lockdowns