Sunday was an unusually warm and sunny day in Ohio, so my husband and I decided it was the perfect time to take our kayak out for the first run of the season. We headed to a park in Kent, near Kent State, to launch our trusty blue Sun Dolphin. I was shocked at how much traffic there was on I-77 in Akron — more than we usually see on a Sunday afternoon during non-pandemic times. When we arrived at the park, it was completely packed. Nearly every spot was taken in the parking lot and the place was crawling with people. They were biking, hiking, skateboarding, kayaking, fishing, and even swimming in the still-frigid Cuyahoga River.

People were, in general, social-distancing, but in groups. We saw some families, but there were also groups of teens and young adults, along with what appeared to be two or three families hanging out together. We saw hundreds of people on both ends of our kayak trip, doing what Ohioans usually do on a beautiful spring day — soaking in the sunshine and socializing. We saw one family wearing masks, but everyone else was showing their faces — laughing, smiling, and relaxing.

There were no Karens freaking out if someone got too close or was spotted without a mask. Everything about the day was normal, and yet surreal. The family with the masks reminded us that these were not normal times, yet everyone acted so… normal.

On our way home we passed a couple of drive-in restaurants that were teeming with people. I can’t even begin to express the joy I felt seeing faces other than my husband’s. As much as I adore the man, I’ve realized over these last week how much I need to commune with other people as well. Though an introvert, I find myself craving human interaction and the human touch. A handshake. A hug. A kiss on the cheek. Things we took from granted three hundred years ago when this all started. Or was it four hundred?

Are you feeling it too? We’ve done our part, heeded the warnings of our leaders and flattened the curve, and now we’re ready to be done with it. Freedom is baked into our American DNA and while we may put up with house arrest for a time, our love of freedom, indeed our right to it, cannot be locked up in houses or hidden behind masks,

As we were getting ready to launch our kayak, I greeted this elderly gentleman, sitting alone in his wheelchair taking pictures of the revelers in the river below. 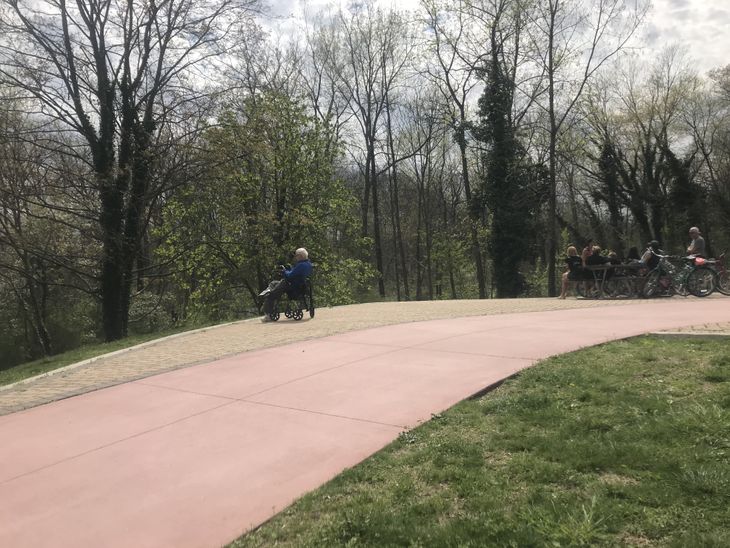 I asked if he was enjoying the beautiful weather and he said that indeed he was. “I envy you so much,” he added, explaining that he had been an avid kayaker and was unable to do it anymore. He waved at the oxygen tubes attached to his nose. We chatted for a few more minutes about some of his kayaking adventures — the Zambezi River in Africa was the highlight of his paddling years. He was probably in his 80s and had no doubt seen a lot in his decades on the earth — wars, civil unrest, financial downturns, and, yes, pandemics. He likely knew people who had been affected or lost loved ones in the 1918 Spanish flu epidemic.

As I headed down to the water, the sweet gentleman called after me: “We live in the greatest country in the world and this is the best time in history to be alive!”

Listen to him. He’s seen things. He knows things.

The American spirit will survive this. Neither overbearing government officials nor annoying Karens can squelch the free hearts that beat within us. We’ll emerge — we are emerging —more introspective, more grateful, more conscious of the things that really matter.