A lefty historian recently attacked the POW-MIA flag as racist.

No, this was not The Onion. Someone actually claimed that the flag honoring prisoners of war and those missing in action during the Vietnam War is “hateful.”

Far from attacking any pernicious racism, the article’s anti-American slant echoes the Vietnam War protests, 40 years after the fighting stopped. Perhaps Rick Perlstein, author of a 2014 book on how Nixon and Reagan used “that racist flag” to obtain political power, concocted this argument in order to drum up publicity for his work, and he appears to be capitalizing on the outrage against the Confederate Flag.

Perlstein’s story has all the elegance of a Jackson Pollock painting. Rather than making a coherent argument, the author throws historical facts onto a canvas, hoping the splatter will convince an audience that he knows what he’s talking about. Perlstein uses little nuggets of history to defend his claims that the sentiment behind the flag is “pernicious myth,” engineered by right-wing politicians to “exploit hatred.” For such a strong claim, Perlstein presents no coherent argument or proof that the flag is racist, but he throws readers enough hints to find a connection.

The moral confusion was abetted by the flag: the barbed-wire misery of that stark white figure, emblazoned in black.

The statement that the flag features a “stark white figure, emblazoned in black” is pure editorializing. In the official version of the flag, the figure is actually black, with a white background: 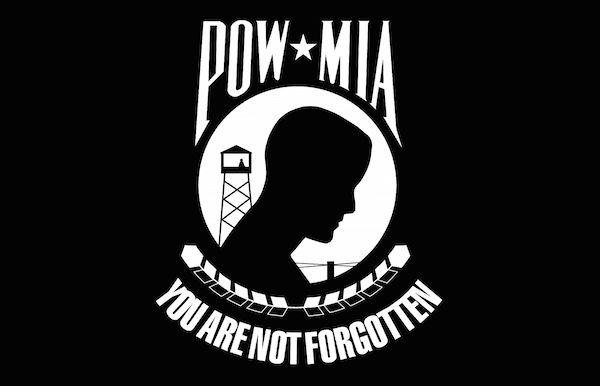 A version of the flag with a white figure and a black background does exist — but it has never been the official version. By choosing to attack this unofficial version, Perlstein is deliberately misleading to paint the flag with an alien political message. That message: The POW/MIA flag, in the process of commemorating the Americans who suffered in Vietnam, minimized the sufferings of the Vietnamese. American lives mattered, Vietnamese lives did not.

No one better illustrates how wrong he is than the Chairman of the Board at the National League of POW-MIA families Ann Mills-Griffiths. Responding to Perlstein’s article, Mills-Griffiths praised the Vietnamese and mentioned the historic meeting between the head of Vietnam’s Communist Party and America’s President Obama.

The POW/MIA flag does not minimize the Vietnamese who died — it only represents a movement by Americans to honor those U.S. soldiers who suffered in one of the longest and most morally complex wars in our history. Honoring our heroes is not the same thing as dishonoring the enemy’s suffering, no matter how badly you want people to buy your book.

Perlstein also slants the facts and brings in one of the Left’s favorite bogeymen to explain how wrong the POW/MIA flag must be:

Richard Nixon invented the cult of the “POW/MIA” in order to justify the carnage in Vietnam in a way that rendered the United States as its sole victim.

How honoring soldiers is a “cult,” I have no idea. Nixon changed the way the military referred to pilots who had been shot down, calling them “Missing in Action.” According to Perlstein, Nixon did this in order to emphasize the number of fallen soldiers and to generate public support for the war by demanding the North Vietnamese Communists return our missing soldiers before we would make peace. Perlstein rages against Nixon’s public relations campaign: “This was bulls**t four times over,” he declares.

Few Americans today would deny that the United States made poor decisions in the war and failed to honor its ideals. Nevertheless, the soldiers who fought, died, and were captured deserve to be honored, and that is the true motivation behind this flag, even if Nixon co-opted it to prolong a bad war.

Internet outrage is fickle. When the media suggested taking down the Confederate Battle Flag, Facebook and Twitter erupted in support for the idea. Perlstein couched his attack on the POW/MIA flag in these terms:

You thought I was referring to the Confederate flag. Actually, I’m talking about the POW/MIA flag.

Rather than rally support, however, Americans overwhelmingly turned on Perlstein. He decided to issue an apology:

I sincerely regret the use of the word “racist” to describe how the POW/MIA flag distorts the history of the Vietnam War. The word was over the top and not called for.

Nevertheless, he took the opportunity to double down on his anti-Vietnam War points:

I’m sorry because many of the people offended by the word “racist” are the same people who were hurt when the experiences and feelings of common soldiers and veterans were manipulated to serve the powerful interests and individuals who blithely and perennially send men and women to war.

This response is telling. Perlstein’s article, couched in “racism” as it is, does not center on racial animosity, but on mistrust of the American system of free markets and limited government. By elevating North Vietnam and constantly berating America, Perlstein hints at old liberal arguments against not only the Vietnam War, but the Cold War in general.

One of the central motivations behind the protest movements in the ‘60s and ‘70s was the idea that American freedom was not exceptional, and that Communism might even be preferable. In other words, we should have followed the Soviet Union, rather than oppose it.

After the Cold War, many Americans hoped these ideas would be consigned to the “dustbin of history.” Perlstein’s attack on the POW/MIA flag reminds us to be ever vigilant in defense of freedom. It is not enough to win the war, you have to win the argument.