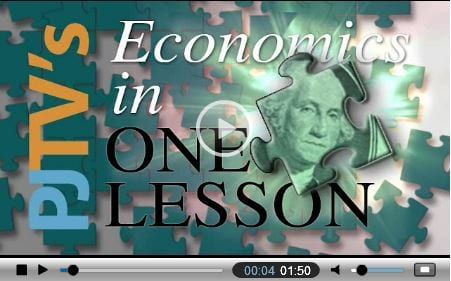 How serendipitous it is that PJTV has begun 2015 with a series of videos covering Henry Hazlitt’s marvelous book, Economics in One Lesson.

Its arrival comes just as Obama administration apologists celebrate the alleged wonders of our current economy. Later, I will provide one example showing how suspect those claims likely are.

PJTV’s effort includes an installment on each of Hazlitt’s original 24 chapters. Short of reading and absorbing the content of the book itself, this series may be the best 90 or so minutes one will ever spend learning how societies genuinely advance their living standards, and how governments almost invariably work to slow or stop that onward march. It’s perfectly suited for otherwise very busy people who only can carve out a few minutes a day from their daily pursuits, including the millions who are working multiple part-time and temporary jobs in this allegedly marvelous economy just to makes end meet.

Keynesian naysayers will immediately try to pounce on PJTV’s supposedly misplaced priorities. After all, a skeptic’s book originally published almost 70 years ago can’t possibly have any current relevance. We’re all so much smarter now, right? Wrong.

Since the advent of Franklin Delano Roosevelt’s New Deal, Keynesian thought has held sway with rare exceptions in economics courses throughout the land. As has been the case in so many other areas dominated by leftist dogma, real-world failures to achieve predicted outcomes have only caused its adherents to double down on their nonsense, mount ever more absurd arguments, and turn up the shrillness of their attacks on opponents.

Keynesians desperately in search of good news after the awful recovery from the nation’s most recent recession — a recovery publicly and explicitly directed by their disciples — want the public to believe that the U.S. economy’s recent performance, at long last, vindicates their precepts.

We’re supposed to forget that their recipe gave us a four-year post-downturn performance that was arguably worse — that’s right, worse — than the four years following the Great Depression’s 1933 crater. We’re not allowed to notice that the 20 percent ramp-up in federal spending supposedly required to enact their precious stimulus plan in 2009, originally sold as a “temporary” two-year maneuver, has instead morphed into what they hope is a permanent floor in the size and scope of the federal government upon which they build an even bigger leviathan.

We’re supposed to discount as unimportant the $6 trillion in deficits and the $7.5 trillion increase in the national debt seen during Barack Obama’s presidency. We’re supposed to believe that the $4.5 trillion in Federal Reserve electronic money creation known as “quantitative easing,” without which an otherwise broke government could never have financed its profligacy, won’t badly hurt us down the road.

Through the first quarter of 2014, during the first 4-3/4 years after the recession’s official end, this unprecedented spending and borrowing binge got us real average annualized economic growth of … wait for it … 2.1 percent. By contrast, during the 1980s recovery, the government under President Ronald Reagan faced far more challenging conditions, including sky-high inflation and interest rates, than Team Obama did in early 2009. Despite that, and while mostly making economic policy choices directly opposed to what Keynesians would have recommended, annualized growth averaged a stunning 4.8 percent.

But now, all is supposedly well. The government estimates that the economy grew by an annualized 4.8 percent during last year’s second and third quarters, finally accomplishing for two quarters what Reagan’s economy did for almost five years. The U.S. economy added a seasonally adjusted 2.95 million payroll jobs in 2014, the largest pickup since 1999. The unemployment rate is “only” 5.6 percent, which, thanks to convenient bar-lowering and likely statistical manipulation, is what the economic elites now believe is “full employment.”

It would be nice to think that what has finally happened is that the private sector has finally figured out how to maneuver its way around the latest round of government encroachment. Sadly, business birth and death statistics shatter that illusion.

Last week, Jim Clifton, chairman and CEO of Gallup, noted that the number of new business startups has trailed the number of failures for the past four reported years. That has never happened since such measurements began in the 1970s. The margin is not narrow: “Four hundred thousand new businesses are being born annually nationwide, while 470,000 per year are dying.”

Such conditions would lead one to question how the economy can be growing so robustly. Hazlitt has at least part of the tragic answer in his book’s Chapter 8: “Spread-the-Work Schemes.”

Though the chapter focuses on labor union make-work and featherbedding practices, which always raise production costs and end up resulting “in less work done and in fewer goods produced,” the principles involved have direct application to how the Obama administration has imposed its will on the nation’s economy. It has done so by creating make-work schemes, at the very least within Obamacare and the government’s regulatory apparatus.

Obamacare’s onerous electronic recordkeeping and reporting requirements on doctors and medical providers have quietly created an entire new industry of “medical scribes.” According to Politico, “About 100,000 of these glorified typists are expected to be working for doctors by 2020.” Though there’s no reason to question the work ethic of the individuals involved, the fact is that these people clearly add little or no value to the healthcare delivery system.

In early December, Labor Secretary Tom Perez bragged: “At the beginning of this administration, there were 730 investigators in the Labor Department’s Wage and Hour Division. Today, we’re over a thousand.” The idea that the there are thousands and thousands of employers out there brazenly violating minimum-wage laws is patently absurd. These new workers will at best add no value to anything. At worst, over time, as a friend of mine who has fought the government has long pointed out, they will dream up new ways to harass law-abiding businesses.

In each instance and likely dozens of others, the new make-work hires are of course counted as employed, and are naturally getting paid and spending most of their take-home pay. Their consumption is treated as part of gross domestic product. So the real question isn’t whether GDP is being artificially inflated by make-work hiring; it’s only how much artificial GDP inflation is occurring with no accompanying genuine increase in standards of living.

This is just one real-life application of Hazlitt’s clearly explained economic principles. Surely dozens of others await those who purchase PJTV’s important series.