Is the Economy Already in Another Recession? 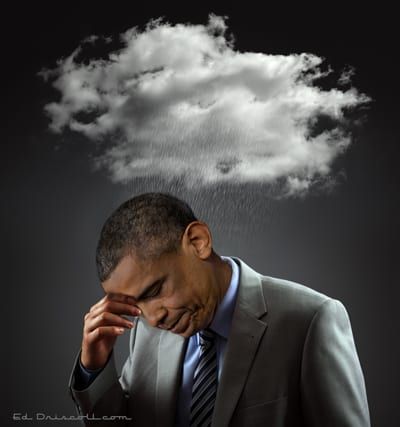 Why do bad things always happen to him?

Last week, the establishment press largely shrugged off the awful and ominous news that the economy shrank at an annual rate of 2.9 percent during this year’s first quarter. When they deigned to notice it, they usually told their readers, listeners and viewers that happy days have now returned.

The press would be making these historical points, and many more, following a steep quarterly dive in a Republican or conservative presidential administration, and would be knocking down the office doors of contrarians like Yamarone to get interviews. We know this because they did such things even during quarters of reported growth during the Bush 43 administration, which put up 25 consecutive quarters of expansion through the fourth quarter of 2007 before the POR (Pelosi-Obama Reid) economy ultimately sent the nation into a recession as normally defined in the third quarter of 2008. Instead, they have either pretended that the first-quarter contraction didn’t happen, made phony excuses, or put forth assertions which would have embarrassed Izvestia during the worst days of the old Soviet Union.

The evening of the report’s release, CBS was the only one of the three broadcast networks with early evening news shows which even acknowledged the existence of the GDP decline.

At CNN, Christine Romans went on and on about the “terrible weather, terrible weather … remember how horrible that winter was?” for 30 seconds before telling viewers that “all the economists … think it bounced back in the second quarter,” and that “some economists (predict) even up to 4 percent for economic growth in the second quarter.” Her bottom line: “Don’t freak out.”

The weather excuse is beyond pathetic. If it was the reason for April’s original disappointing estimate of 0.1 percent growth, something else has to explain why the second estimate went to a 1.0 percent contraction. It’s a complete insult to news consumers that these clowns are pretending that the weather had any relevance whatsoever to June’s disastrous final number. As I have noted several times elsewhere, all but one of the economy’s other winter contractions in the past 50 years occurred partially or entirely during officially declared recessions. The sole exception was 2011’s first quarter, during President Barack Obama’s reign. Besides, this past winter, as “the 34th coldest such period for the contiguous 48 states as a whole since modern records began in 1895,” didn’t even make the top quartile of cold snaps.

Following the theme set by Romans, CNNMoney.com’s Annalyn Kurtz put up a post titled “3 reasons not to freak out about -2.9% GDP.” She took the propaganda line a step further when she wrote: “This recovery is underway, but it’s still very slow.” Setting aside such a foolish reaction to news of a contraction — the strongest contention one could conceivably make is that “growth has returned” — it’s also an inadvertent admission that the policies of the now-perceived worst president since World War II have failed to get the economy past the “recovery underway” stage for nearly five years.

Very few press reports have acknowledged that health care spending, originally thought to have increased during the quarter at an annual rate of over 9 percent, instead decreased by about 1.5 percent in last week’s third estimate. Almost none identified the probable culprit: O-, O-, … Obamacare.

Consumers herded into Obamacare, many of them belatedly recognizing the obscenely high deductibles their new policies contain, are likely putting off doctor visits and other medical services — a situation the Affordable Care Act’s insufferable promoters promised would end. Many of those with no immediate medical needs understand how their Obamacare policies will hang them out to dry if anything serious does happen, and — assuming they have any money left after paying their premiums — are restricting their spending on other items. Many of the newly uninsured who either can’t afford their premiums, or who have been added to the de facto uninsured ranks after getting lost in the Obamacare maze, also realize that they need to keep a lid on their other spending. Meanwhile, Americans with employer-based insurance are also playing it close to the vest, trembling at the thought of the premium increases and policy restrictions they’ll face during their next open enrollment period.

Naturally, consumer spending has cratered, declining in real terms in both April and May. Obamacare’s deliberately chaotic rollout prevented much of the fourth-quarter spending meltdown I thought might occur from taking place, but it couldn’t defer the inevitable forever. Since personal consumption expenditures make up about 70 percent of reported GDP, those who are predicting the return of good times in the second quarter need to identify other sources for their predicted stellar growth.

Inventories? While this element may come in positive in the second quarter after the first quarter’s big drawdown, has anyone noticed how awful retail traffic has been this quarter? There has been no post-winter rebound. Does anyone really think that stores aren’t being extremely careful about their purchases and stock levels?

Net exports? C’mon. Worse than expected deterioration here is the other major reason for June’s large downward GDP revision. April’s trade imbalance was worse than March’s. May will apparently be almost as weak as April, and still worse than March.

A turnaround in non-inventory business investment? There may be a bit of an improvement from a currently depressed level, but it’s hard to see how it will provide a major contribution. Three reasons to cool the enthusiasm: Shipments of durable goods barely budged in April and May, factory orders fell in May, and May construction spending was flat.

The anomaly which would seem to refute the idea that the economy may really be contracting is job growth, which, seasonally adjusted, has averaged about 214,000 per month so far this year and was predicted to come in at about the same level in June when this column was submitted. The problem is that job gains are not sufficiently translating into production income growth.

First-quarter productivity fell by an annualized 3.5 percent. If workers collectively produce less, it doesn’t matter how many of them there are. GDP will still decline. Additionally, Sentier Research reported this week that median household income in May 2014 “was ony 1.3 percent higher than in May 2013.”

Thus, if growth returned at all in the second quarter, it’s overwhelmingly likely that it won’t impress anyone. Given that last-week’s GDP writedown was the largest in a third revision in 38 years, we’ll probably have to wait until late September for a (we hope) somewhat reliable final word. The default assumption for the time being has to be that the BEA has lost its handle on timely, accurate data collection.

Also looming is the impact of the bureau’s comprehensive five-year revision at the end of July. Barring major changes it might retroactively make to the first quarter, it seems virtually certain that any reported second-quarter growth won’t offset the first quarter’s contraction, which would mean that the economy really shrank during this year’s first six months.

The day after June’s GDP report, economists and analysts, who just days earlier were predicting up to 4 percent annualized second-quarter growth, began wearing out their erasers. Most of them revised their formerly rosy forecasts down to 3 percent or less. An Associated Press report projected only 2.5 percent.

Here’s a prediction I’ll confidently make: These “experts,” who have been so wrong for so long that it’s amazing they still have any clients, are nowhere near done backtracking.