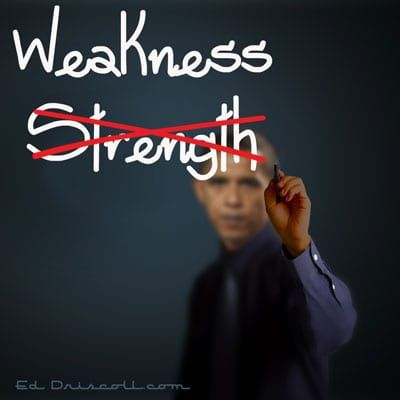 We now know — even the Associated Press, better described as the Administration’s Press, has now acknowledged it — that President Barack Obama, in AP’s words, “did not participate” in a White House meeting of his national security team Saturday morning “to get updates on the situation and discuss policy options” in reaction to Russia’s invasion and takeover of Crimea and threatened military intervention in the rest of Ukraine. Those who need help getting past AP’s whitewashing need to understand that “did not participate” means “did not attend.”

Last time I checked, the president of the United States was the nation’s commander in chief, the person who is supposed to be primarily responsible for the nation’s security and well-being in its relations with the rest of the world. He happens to live in the same White House where the national security meeting was held. PJ Media’s Bridget Johnson has noted that Obama “had no public events on his schedule.”

What Obama apparently chose to miss was not a “3 a.m. phone call.” It was a daytime meeting at his own residence. It concerned a country whose guarantee of security, embodied in the 1994 Budapest Memorandum, was confirmed by Obama himself in December 2009.

Congress and the American people should demand to know exactly what could possibly have been more important than Obama’s attendance at that meeting. We all know that if a President Romney or George W. Bush had acted similarly, the press would already be demanding an answer for us, and quite properly so. Instead, we get the AP’s aforementioned indifference.

It gets worse. Obama was briefed after the fact by a “national security team” led by none other than Susan Rice.

Five days after the September 11, 2012 terrorist attack in Benghazi, which took the lives of U.S. Libyan Ambassador Christopher Stevens and three other Americans, Rice went on the Sunday talk shows to claim that an anti-Muslim video inspired the “spontaneous – not premeditated” attack. Just last week, in the face of overwhelming, irrefutable evidence to the contrary, she contended that “the notion that somehow I or anybody else in the administration misled the American people is patently false.”

Six months after it became obvious that the Senate would not confirm her as the country’s next secretary of State, Obama rewarded Rice by elevating her to her current perch as national security adviser. So the president’s chief informant has every reason to tell Obama things which would further his agenda, which may or may not coincide with an agenda consistent with the country’s security.

Is Obama’s real agenda different? There’s ample justification for believing that’s the case. In March 2012, he was caught on an open mic telling then Russian President Dmitry Medvedev that he would have “more flexibility” to deal with contentious U.S.-Russian issues after that year’s presidential election. Perhaps part of that “flexibility” includes pretending to have a problem with a Russian return to de facto control of Ukraine while doing nothing about it. If so, no wonder Obama was a no-show on Saturday morning. Why bother coming downstairs to sit in on a meeting about something when the result is already a foregone conclusion? Maybe his 90-minute Saturday afternoon phone call with Russian President Vladimir was really a plea: “Slow down, guy, you’re going so fast that it’s making me look bad.”

Obama may also be porting his patented habit of disclaiming responsibility for anything negative that happens in his administration from stateside matters to international affairs.

He has said that he only learned of the IRS’s acknowledged targeting of tea party, conservative, ballot box integrity and prolife groups in press accounts “while watching the news.” That’s a highly suspect copout, because “the Office of the White House Counsel and its head, Kathryn Ruemmler, were told … that ‘a small number of line IRS employees had improperly scrutinized certain … organizations.'” Ruemmler had a clear professional duty to inform Obama of these developments. If she didn’t, and Obama was initially as upset about the scandal as he claimed to be (now he says that there was “not even a smidgen of corruption” at the IRS), why is she still on the job? The more plausible explanation is that Ruemmler did inform Obama, and that he’s really okay with the IRS’s conduct — except for the getting caught part.

He was supposedly as surprised as everyone else at HealthCare.gov’s disastrous rollout, despite gigantic but ignored red flags at Kathleen Sebelius’s Health and Human Services Department, and despite Sebelius’s “active White House presence in the months leading up to the botched rollout,” because “I don’t write code.”

Obama has adopted reducing income inequality as a personal crusade, even as it has worsened since he took office though after holding steady during George W. Bush’s administration. Judgment-impaired energy-loan debacles are just “bad luck.” Record Federal Reserve-funded budget deficits occur because the Republican House won’t pass even more tax increases. It’s the same song and dance with the deadly Fast and Furious scandal, the NSA’s spying on Americans, and Attorney General Eric Holder’s pursuit of journalists as criminals.

Obama’s passive posture and his gutting of the military appear designed to remove the U.S. from having any meaningful role in world affairs. The overwhelmingly likely deterioration in worldwide democratic conditions would then be something he would say he was powerless to reverse.

Along with Russia, the Taliban, al-Qaeda, and the Chinese appear to be quite pleased at this. The American public should be extremely alarmed.