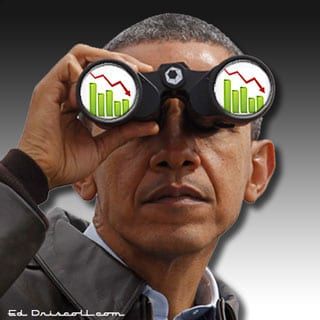 Five years into the POR (Pelosi-Obama-Reid) economy, our government’s lowered expectations, eagerly embraced and endorsed by its media apparatchiks, are arguably more offensive, intolerable, and damaging than the failed government policies which have kept it in effect.

Those policies, best understood as the final proof of Keynesianism’s collapse, have begotten awful results. Supposedly designed to generate robust economic growth coming out of the recession, they have instead led to the weakest post-downturn growth since World War II, with trillions of dollars in collateral damage.

Three decades ago, during the first four years after the economy emerged from an awful recession while facing a far worse economic landscape — 13 percent inflation, 20 percent-plus prime interest rates, and almost 11 percent unemployment — the economy grew by over 21 percent in real terms. Assuming it ekes out the 1.7 percent annualized growth analysts predict during this year’s second quarter, the POR economy’s four-year post-recession growth will only be 8.5 percent. If the economy would have replicated its Reagan-era performance during the past four years, growth in Gross Domestic Product (GDP) would have been 2-1/2 times greater. That breathtaking difference works out to over $6,000 per person in today’s dollars, or over $24,000 for a family of four: This leads to a point which can’t be repeated enough: The recession as defined by Obama cheerleader Warren Buffett in 2010 still hasn’t ended. Buffett’s benchmark, which explains why the average American correctly feels that the recession is still here: “I think we’re in a recession until real per capita GDP gets back up to where it was before.”

If we’re lucky, real per capita GDP might get back to where it was in calendar 2007 this year. Under Reagan, per capita GDP fully recovered within one year of the recession’s end, and was 13 percent higher than its pre-recession peak by Year 4.

As demonstrated last week, the recession’s onset can be traced to early June 2008, the point at which it became clear that Barack Obama, armed with an “energy-starving, heavy-taxing, wealth-redistributing, business-hostile agenda,” would become the Democratic Party’s presidential nominee and that campaign’s favorite to win in November. Enough businesspeople, entrepreneurs, and investors to make a difference cancelled any plans they might have had for expansion and additional hiring, and in many cases scaled back their operations in an attempt to survive the coming storm.

Obama himself seriously worsened the recession’s severity during the 2008-2009 presidential transition by expressing solidarity — “they’re absolutely right” — with union workers who were philosophical predecessors of the Occupy movement after they staged an illegal sit-in at a bankrupt window factory in his Chicago hometown. As a result, two banks which shared no blame for the employees’ plight were intimidated into making $1.35 million in payments to make what should never have been their problem go away. An Investor’s Business Daily editorial correctly stated that Obama endorsed “criminal activity,” and summarized the impact of that move in nine blunt words: “To advocate offenses against society is to legitimize them.” Many more members of the business community who hadn’t figured out or focused on what this man was and would be all about now did so, and reacted accordingly. As night follows day, the U.S. economy had its worst single-month job loss in history.

Once in office, Obama, with the help of House Speaker Nancy Pelosi and Senate Majority Leader Harry Reid, oversaw the passage of an $800 billion-plus stimulus program which spectacularly failed by any reasonable definition.

Four years and $5 trillion in accumulated budget deficits, along with another $3.4 trillion in “money from nothing” purchases of government securities by the Federal Reserve, both of which are supposed to be stimulative, have failed to stimulate the kind of growth needed to take the unemployment rate back to regular and fully loaded levels of 5.1 percent and 9 percent or lower, respectively, both of which were present for 36 straight months during the George W. Bush administration.

Obama’s continued encouragement of lawbreakers who support his agenda since he took office has been an important negative influence. Two of many examples include his silence while AIG executives were harassed in 2009, and his 2011 endorsement of the Occupy movement. Even more crucial, Obama and his own administration have openly flouted the law when doing so advances their agenda on more occasions than one can even hope to count. The business community especially noticed how they ran roughshod over the common-law property rights of disfavored General Motors and Chrysler bondholders during their spring 2009 bankruptcies, and chose to make hourly UAW members whole while shafting Delphi’s salaried retirees. Paraphrasing IBD above, “Openly flouting the law delegitimizes it.” The best defense for most businesses, especially smaller ones, has been to lay low, move very selectively, and hope not to get noticed. Such completely rational postures have led to the slow-motion economy we are now experiencing, and definitely not enjoying. In such an atmosphere, even interest-free funding won’t motivate, while the Reagan era’s off-the-charts growth was achieved despite persistent double-digit interest rates.

Obama and Fed Chairman Ben Bernanke are clearly okay with all of this. Bernanke has publicly stated that he is targeting a reduction of the current 7.6 percent unemployment rate to 7.0 percent by June 2014 and 6.5 percent by June 2015, as if that’s the best anyone can possibly do in the circumstances. The guess here is that we won’t even get that far by the identified deadlines. Every time Bernanke makes noise about “tapering” his stimulus, let alone stopping it or, heaven forbid, unwinding it, the stock market heads down, Ben gets cold feet, and nothing changes. Thus we have an artificially propped-up market which has increased the wealth of the top half of American households by over $4 trillion, while the heavily home value-dependent and debt-ridden bottom half has been devastated.

The Democratic Party and the establishment press would have correctly considered those unemployment rates unconscionable as policy goals until Obama came into office. Obama’s own economic team obviously also once thought so; they’re the ones who promised that the rate would be down to 5.1 percent by now if Congress would only pass his stimulus plan.

Obama, Bernanke, and their defenders would rather stick with the current malaise and its massive waste of human potential than change course and do what has historically quickly changed things for the better: lower and simplified taxes accompanied by regulatory restraint and predictability. The longer they remain stubborn, the better the chances are that we will become a two-decade zombie economy like Japan. It will not be pretty — at a macro or micro level.