Has the POR (Pelosi-Obama-Reid) Economy Bottomed Out?

The performance of the stock market since March 9 provides reason to hope that the POR economy’s wealth-destroying damage has, at least for the time being, reached its lowest point.

The markets’ broad-based 15% bounce-back since then (as of when this column was written), which has brought cheer to battered investors for the first time in many months, has had four primary causes.

Third, after months of nearly daily warnings of dire catastrophe, President Barack Obama has altered his public statements on the economy to reflect the type of qualified optimism one ordinarily would expect from the country’s chief executive.

A final, less appreciated reason is that there were signs of a pushback by the bailed-out. Citigroup’s chairman said that the bank doesn’t require any additional government investment. Bank of America’s chairman echoed that sentiment. Even GM, while still on the brink, said it doesn’t need its next cash infusion right away. This seems to indicate that managements are chafing under existing, imminent, and/or proposed bailout-driven restrictions on how they run their businesses, and are trying either to get out from under them or to minimize their damage. I believe the markets were pleased at the possibility that the creeping nationalization we’ve seen in the past six months may be halted before it goes all in.

This is all well and good. But before the markets’ trough is forgotten, it’s important to document the damage that POR economy architects Nancy Pelosi, Barack Obama, and Harry Reid have inflicted on the nation, and to demonstrate just how far the markets have to come back before we can be said to have recovered completely.

The POR economy began in earnest in June of last year. At that point, as the economy was coming back nicely from a mild fourth-quarter 2007 downturn, two things about the Democratic Party’s presidential nominee and congressional leadership became crystal clear to businesses, entrepreneurs, and investors. First, Pelosi, Obama, and Reid were, and still are, willing — no, make that eager — to starve the economy of energy in the name of global warming, one of the biggest hoaxes in human history. Second, they were, and still are, bound and determined to sharply raise taxes on the most productive 5% of the population in the name of “spread(ing) the wealth around.”

The POR economy kicked into overdrive (or is it under-drive?) in September when the decades-in-the-making Democratic debacles at Fannie Mae and Freddie Mac (a.k.a. Fanron and Fredron) came to a head, forcing those “government-sponsored enterprises” to become “government conservatorship enterprises.” The accumulated effect of Fan’s and Fred’s irresponsible-lending, foreclosure-generating machine finally wrought its long-feared havoc. This in turn led a panicked Treasury Secretary Hank Paulson and Fed Chairman Ben Bernanke to push for the $700 billion bailout that gave us the Troubled Asset Relief Program. TARP quickly morphed into a partial bank nationalization program.

The stock market tanked badly in the face of this withering assault. That assault continued through Election Day, Inauguration Day, and all the way through March 9. Obama’s non-stop negativity, through victory, inauguration, and his first four weeks in office, was designed to ensure the hasty passage of his precious mislabeled “stimulus” package before the economy began showing enough visible signs of recovery. For several weeks after that, the flailing of new Treasury Secretary Tim “Tax Cheat” Geithner, his persistent failure to fill key positions, and the budding overall perception that Team Obama might be in over their heads further shook the markets. It’s not like any of these problems ended on March 9, but by that point the markets had priced in these factors’ effects.

So what has the POR economy wrought? The chart below shows where the three major stock market indices stood on the following dates: 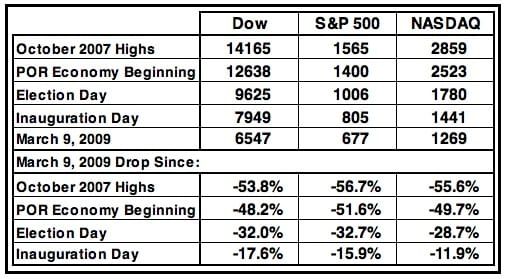 Additionally, in the table below, I have adjusted each index’s mid-1990s year-end values for inflation, demonstrating that the market lows of March 9 brought us back to index values that were last seen in real terms in 1995: 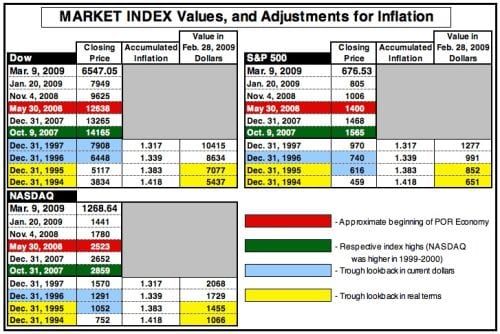 Thus, after considering inflation, it’s fair to say that the POR economy has undone almost all of the stock market gains achieved since the Gingrich revolution.

Even ignoring inflation, it won’t be fair to say that we’ve recovered from the ongoing POR economy until the market indices get back to roughly double their March 9 troughs.

Steven A. Schwarzman of the Blackstone Group has called this decline an “unprecedented” destruction of worldwide wealth. It should not and will not be forgotten that one U.S. political party and its three principal unprincipled leaders drove the vast majority of this.

Barack Obama was big on “hope” during his presidential campaign. We can now only “hope” that the worst of the markets’ carnage is indeed over.