A Border 'Invasion'? Let's Dial Back the Immigration Rhetoric, Please 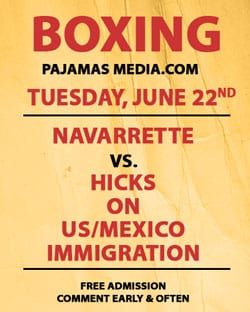 There are those who believe that — in light of Arizona’s hateful tantrums against not just illegal immigrants but also brown skin on murals, ethnic studies, and teachers with accents — it’s open season on Latinos.

And when they look south to the U.S.-Mexico border, one of their greatest fears is that this attitude has now gone beyond talk radio and asinine legislative proposals and spread to the men and women who’ve sworn an oath to protect the border from would-be terrorists and smugglers of drugs, guns, and immigrants – if not necessarily from aspiring gardeners, maids, and nannies.

Due in part to decades of allegations of brutality, racism, and mistreatment of immigrants, the U.S. Border Patrol has — since it was founded in 1924 — never had a good relationship with the Latino community in the United States.The fact that, today, about half of all Border Patrol agents are Latino hasn’t done much to change that.

Meanwhile, the relationship with U.S. Customs and Border Protection has not been any better.

Now, in light of the increasingly acrimonious tone of the immigration debate, those who police the border actually buy into this nonsense that the United States is undergoing an “invasion.” If so, that could make life on the border especially dangerous.

Just ask the family of 42-year-old Anastasio Hernandez Rojas. An illegal immigrant who lived in San Diego for 25 years and worked in construction, Hernandez was apprehended after a traffic stop and handed over to the Border Patrol, which deported him to Mexico. But since his five U.S.-born children were still in the United States with their mother, Hernandez did what any father would do: He tried to get back to his kids. In the process of trying to re-enter, Hernandez was apprehended, put on a bus with other illegal immigrants, and transported back to the border for return to Mexico.

But once at the border, something went horribly wrong. According to multiple witnesses, Hernandez was separated from the group and, already handcuffed, placed face down on the ground. Several officers from Border Patrol and Customs and Border Protection pummeled him with punches and kicks while, at one point, as many as 20 officers swarmed the scene. One of the U.S. Customs and Border Protection agents pulled out a Taser gun and motioned to the others to step back. Again, according to witnesses, and cell phone video, the agent fired at least five jolts into Hernandez, who eventually stopped moving. About a half hour later, he was transported to a local hospital, where 24 hours later, he was declared brain dead.

A spokesperson for U.S. Customs and Border Protection said that Hernandez was resisting arrest and that the officers took the appropriate action to ensure their safety.

An autopsy by the San Diego Medical Examiner’s Office concluded that the cause of death was cardiac arrest but methamphetamine abuse and hypertension were also contributing factors. However, the coroner also ruled the death a homicide. And that’s what is being investigated by both the San Diego Police Department and the FBI: whether the death of Anastasio Rojas Hernandez was a homicide caused by excessive force while the deceased was in the custody of federal law enforcement officers.

If that’s the case, those officers should obviously be fired and put on trial. I don’t care if they do think they’re fending off an “invasion.” There are good reasons for why we hold our law enforcement officers to a higher standard than the people they arrest. And you don’t break the law in order to enforce the law.

Let me be clear. It was wrong for Hernandez to enter the country illegally and to try to re-enter the country once deported. Still, this tragic case illustrates clearly why the current immigration system is broken and needs repair. Congress must stop playing politics with this issue and create more avenues for people to come to this country legally so stories like this aren’t repeated.

But are the critics right? Is this part of a grand conspiracy where the anti-illegal immigrant — and arguably, anti-immigrant and anti-Latino — mood sweeping the country has permeated the ranks of federal law enforcement agents at the border?

I doubt it. More often than not, these agents are simply trying to do their job under very difficult circumstances. Their first concern is getting home to their kids.

Which, ironically, is the same thing that motivated Anastasio Rojas Hernandez to risk — and eventually lose — his life trying to re-enter the United States once expelled.