A convert to Islam who named himself Jah’Keem Yisrael (formerly Alton Alexander Nolen) beheaded one of his coworkers and was shot while trying to behead another on September 26 at his place of work, Vaughan Foods in Moore, Oklahoma. Despite the numerous indications that Yisrael was inspired to choose his manner of murder and to carry it out by his immersion in Islam, authorities profess to be puzzled as to why he did it, or at least certain that his actions had nothing to do with that most misunderstood of religions, Islam.

The UK Daily Mail reported Tuesday that “while the FBI is investigating his links to Islam, and while he believed Nolen was using Arabic terms during the attack,” Cleveland County prosecutor Greg Mashburn “said the attack seemed to be tied more to the complaints against him” by coworkers at Vaughan Foods. Traci Johnson, whom Yisrael tried but failed to behead, said that not long before the attack, she got into an argument with the soon-to-be beheader “about him not liking white people.” Mashburn accordingly jumped at the chance to report that the attack was racially, not religiously motivated: “It had more to do with race rather than trying to convert people.”

Likewise Tony Blinken, Obama’s deputy national security adviser. When he was asked whether the beheading was an act of terror or, as the Obama administration notoriously classified the Fort Hood jihad massacre of November 2009, workplace violence, Blinken responded: “We don’t know. The FBI has an active investigation. I’m not going to get ahead of it. Let’s see what they find.” And as for the FBI, Special Agent in Charge James E. Finch said that the bureau hadn’t yet figured out what Yisrael’s motive was. 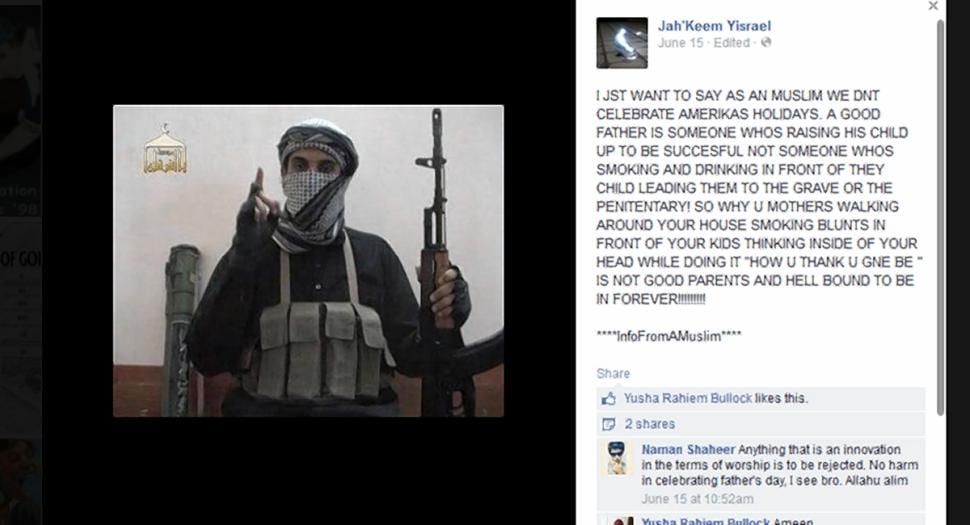 1. His hatred for America and proclamation of a Sharia future.

Jah’Keem Yisrael’s Facebook page, recently taken down, was extraordinarily revealing. According to the New York Daily News, it was “riddled with phrases like ‘Sharia law is coming’ and calling America ‘wicked.’”

2. His admiration for jihad terrorists.

The New York Daily News also reported that the Facebook page had “photos of various terror groups and their leaders, including bin Laden, who was killed by U.S. forces operating in Pakistan in 2012.”

3. His positive view of beheadings.

His page also featured a graphic photograph of a beheadings accompanied by this Qur’an quote:

“I will instill terror into the hearts of the Unbelievers: smite ye above their necks and smite all their finger-tips off them” (Qur’an 8:9-13).

4. His Qur’anic quotes and Islamic exhortations.

Jah’Keem Yisrael filled his Facebook page with quotations from the Qur’an and exhortations to his fellow Muslims to be more rigorous and correct in their observance of Islamic ritual and morality. One of these read: 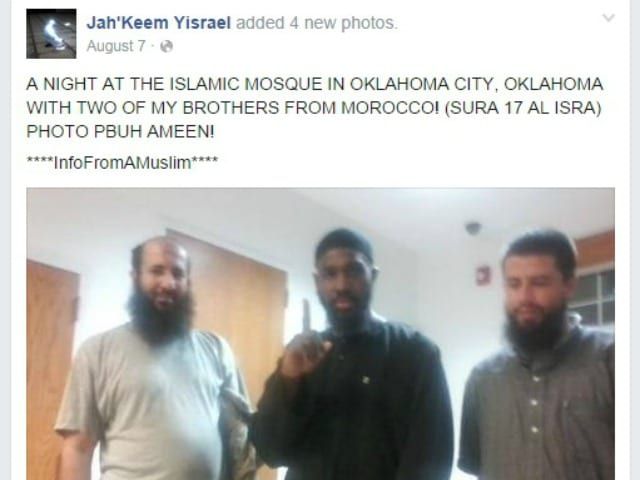 Also on Yisrael’s Facebook page was a photograph of him with two members of the Islamic Society of Greater Oklahoma City; Yisrael stands between them holding up his index finger in the sign of the Islamic State, signifying Islam’s uncompromising monotheism.

Yisrael is said to have been shouting “Islamic phrases” during his murderous rampage.

I went to the same mosque the Oklahoma Muslim who beheaded his co-worker today. I live ten minutes away!

The Imam was Imad Enchassi the last I heard. He was a friend of mine. He is a Lebanese-born Sunni who hates Israel. He once gave a sermon that the Israelis were trying to collapse al-Aqsa mosque by digging tunnels underneath it. They have no issue with Palestinian suicide bombings because, as it was explained to me, that is the only weapon the Palestinians have.

They sold Milestones in the book shop while I was there, which as you know calls for replacing all non-Islamic governments with Islamic ones. I remember listening to a tape a friend of mine, Yahya Graff, another white convert to Islam, had that prayed for the destruction of Israel and America.

The imam when I first converted, Suhaib Webb, is hailed as a moderate by liberals in the United States but he was the one that explicitly told me that according to Islam, three choices are to be given to non-Muslims: convert, pay the jizyah tax and live under Islamic rule, or jihad. They try very hard to whitewash Islam when the media is around, but they believe in their religion and the ultimate goal of an Islamic caliphate.

Then on September 30, I interviewed this man, who has left not only the Islamic Society of Greater Oklahoma City but also Islam as a whole. He gave more details to demonstrate that this mosque was not at all as “moderate” as its leaders claimed in the wake of the beheading.

Among the explosive revelations: Mosque members said that if Osama bin Laden showed up at the door and needed help, they would help him because he is a Muslim brother. Once this former member went target shooting with AK-47s with two other Muslim converts — the targets were labeled George W. Bush and Ariel Sharon.

Just days before Yisrael’s rampage at Vaughan Foods, the mosque’s imam, Imad Enchassi, claimed that “Islamophobes” in Oklahoma were plotting to behead Muslims. Did Yisrael hear this and leave the mosque seething with resentment and righteous rage? Did he behead Colleen Hufford at Vaughan Foods before the infidels could behead him?

People get fired all the time. A small number react violently. An even smaller number start beheading people in that situation. It just happens that Jah’Keem Yisrael adhered to a religion that directs believers to “strike the necks” of unbelievers (Qur’an 47:4). Yet the possibility that Islam could have informed and guided Yisrael’s response to his rage and hate, and the implications of that possibility, is not one that authorities seem disposed to explore. And that means that nothing will be done by anyone to prevent the formation of new Jah’Keem Yisraels.