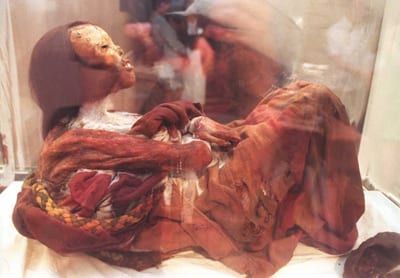 A 1996 exhibit in Washington DC featured the remains of an Incan child sacrifice.

The title isn’t fair — in Canada infanticide is a serious crime that can land you a tough five year sentence. That’s five years maximum, by the way. After all, it’s only killing a baby, nothing people need to really be punished for doing.

People in Canada who think killing an infant is the act of a morally bankrupt monster who deserves more time than the average murderer are getting another kick in the teeth, courtesy of Judge Joanne Veit. She let a woman convicted of murdering her newborn baby then throwing the body over her neighbor’s backyard fence walk out of court with a suspended sentence and probation.

According to Veit the murderess is the victim:

Queen’s Bench Justice Joanne Veit rejected the Crown’s call for a four-year prison term — which she described as “essentially” seeking the maximum five-year punishment when taking into account the time Effert has already spent behind bars and under strict bail conditions.

Based on the fact infanticide has not been struck from the Criminal Code and it has no minimum penalty, Veit said she feels Canadians “understand, accept and sympathize with the onerous demands pregnancy and childbirth exact from mothers, especially mothers without support.

“Naturally, Canadians are grieved by an infant’s death, especially at the hands of the infant’s mother, but Canadians also grieve for the mother,” said Veit.

I’m sure. The mother in question is Katrina Effert. In 2005, she gave birth to the child alone in her parent’s basement and when the baby started to cry, she strangled the boy with a pair of thong underwear and threw his body into her neighbor’s yard. When police investigated after finding the boy’s body, she initially claimed she was a virgin, but when caught in that lie she told cops she had given the baby to her boyfriend.

She strangled her newborn baby, threw the body into her neighbor’s yard, and then tried to frame her boyfriend for the murder. She did all this because, at 19, she was hiding her pregnancy from her mother.

During her first trial her behavior — specifically her attempts to cover up the crime and frame an innocent man — was used by prosecutors to show this wasn’t “infanticide” but murder. In Canada, infanticide is assumed to be the product of a temporary mental illness — brought on by having a baby or by that mind-searing horror we call lactation. In Canada a woman commits infanticide if she murders a newborn before she has “recovered” from the effects of child birth, a process billions of women were able to handle for millions of years without losing their sanity.

In that first trial, Effert was sentenced to life in prison. But her defense lawyers appealed and we have this ruling, in which a judge very cavalierly suggests that Canadians should be grieving for the mother as well as for the helpless child who was murdered with a pair of thong panties and dumped like a bag of garbage into some unsuspecting neighbor’s backyard. Obviously many people in the pro-life movement see this as the natural progression of a culture that wholeheartedly accepts the most liberal positions on abortion. And they may have a point:

Pro-life advocates have warned for years that widespread acceptance of abortion will open the door to greatersocietal acceptance of infanticide, beginning with the euthanizing of disabled newborns.  Infanticide proponent Peter Singer, a top ethicist at Princeton University, has said, for example, “there is no sharp distinction between the foetus and the newborn baby.”

Though he once was considered to be on the radical fringe, Singer’s views are becoming more mainstream.  For example, the world’s most prestigious bioethics journal, The Hastings Center Report, published in 2008 an enthusiastic defense of the Netherlands’ practice of euthanizing newborns.

However, it is a classic case of putting the cart before the horse to assume that acceptance of abortion is the driving factor in the culture of death Canada and the United States have both developed over the years. Canada’s acceptance of late-term abortions is a symptom of a much deeper problem, one that also leads to a criminal justice system that gives women who murder newborns slaps on the wrist.

Leftism sanctions and encourages criminality by changing societal views of criminals and victims. We see this clearly when Veit speaks of the onerousness of childbirth, as if the child is a parasite erupting from the womb of some innocent victim in a scene slightly less gory than the chest bursting dinner scene in Alien. Meanwhile, Veit presumes to speak for all Canadians when she claims they grieve for Effert, the woman who strangled a baby and then tried to frame an innocent man for the murder.

Collectivist ideology sees people as essentially interchangeable; they do not accept the idea that a child’s life is more precious than an adult’s. The Western leftist tradition also sees all people as victims and criminality as an expression not of moral weakness or lack of character, but of frustration and lack of opportunity. Canada, with its much beloved welfare state and universal health care, still wasn’t doing enough for poor Katrina Effert and that’s why she killed her son. It has nothing to do with selfishness, immorality, or evil.

For the left, “income inequality” causes crime and the criminal is actually a victim of an unfair and unjust system created by the only true evil in the world: Western civilization. More than 5,000 years of philosophy and moral tradition has led to the West being (until recently) the light in a benighted world. In a little less than 200 years, Karl Marx and his spiritual heirs have overturned those traditions and now we are a people who slap the wrists of child murderers while supposedly grieving for them. Now we blame the newborn for his murder by insinuating that his birth was such an ordeal it literally drove the mother mad. 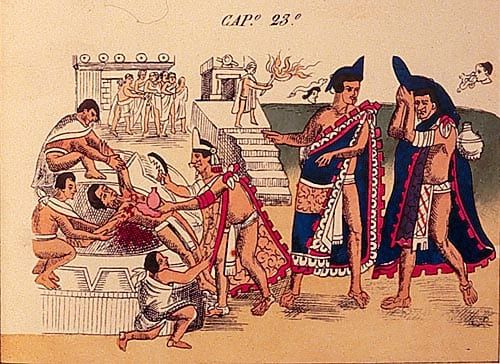 About eight years ago I took a class in Meso-American art with an archeologist who had two decades in the field under his belt. One of the things I learned was that in some of those famous pyramid temples each corner had a sacrificed infant placed under the foundation. The first Europeans to come into contact with the Aztecs were rightly disgusted by people who killed their own children in religious ceremonies. Now their descendants suspend the sentences of child killers who didn’t want to get in trouble with their parents.