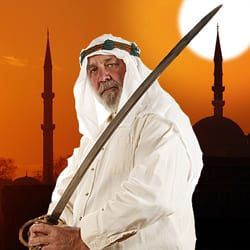 Finding and connecting similar patterns of behavior throughout Islamic history is one of the most objective ways of determining whether something is or is not part of Muslim civilization.

Consider the issue of forced conversion in Islam, a phenomenon that has a long history with ample precedents.  Indeed, from its inception, most of those who embraced Islam did so under duress, beginning with the Ridda wars and during the age of conquests, and to escape dhimmi status.  This is a simple fact.

Yet, when one examines today’s cases of forced conversions with those from centuries past, identical patterns emerge, demonstrating great continuity.  Consider:

Days ago in Pakistan, two Christian men were severely beaten with iron rods and left for dead by a group of Muslims, simply because they refused to convert to Islam.  According to Compass Direct News, they were returning from a church service when they were accosted by six Muslims.  After they discovered they were Christian, the Muslims:

then started questioning them about their faith and later tried to force them to recite the Kalma [Islamic conversion creed, “There is no god but Allah, and Muhammad is his messenger”] and become Muslims, telling them that this was the only way they could live peacefully in the city. They also offered monetary incentives and “protection” to Ishfaq and Naeem [the Christians], but the two refused to renounce Christianity.

“After cajoling the two Christians for some time,” the Muslims pretended to go away, only to ram their car into the Christians: “The Muslims [then] got out of the car armed with iron rods and attacked Ishfaq and Naeem, shouting that they should either recite the Kalma or be prepared to die…severely beating[ing] the two Christians, fracturing Ishfaq Munawar’s jaw and breaking five teeth, and seriously injuring Masih…. [T]he two Christians fell unconscious, and the young Muslim men left assuming they had killed them.”

Contrast this contemporary account with the following anecdote from some 500 years past (excerpted from Witnesses for Christ, pgs.62-64):

In the year 1522, two Christian brothers in Ottoman Egypt were denounced by local Muslims “mostly out of jealousy and envy”; so the emir arrested them and “began flattering them and asking questions about their faith.”  The brothers made it clear that they were firm adherents of Christianity.  “The Muslims in the audience became enraged with the brothers when they heard their answers, and they began screaming and demanding they must become Muslims.”  The brothers responded by refusing to “deny the faith we received from our forefathers, but we will remain unshaken and very firm in it until the end.”

The Muslim judge deciding their case told the Christian brothers that if they simply said the Kalma and embraced Islam, they “would be given many honors and much glory”; otherwise, they would die.  At that point, the brothers’ mother came to support them, but “when the Muslims in court noticed her, they fell upon her, tore her clothing, and gave her a thorough beating.”

After rebuking them for their savagery, the brothers reaffirmed that they would never deny Christianity for Islam, adding “behold our necks, do what you wish, but do it quickly.”

Hearing this, one of the Muslims in the audience became so angry that he took out a knife and stabbed Kyrmidoles [one brother] in the chest, while someone else kicked him as hard as possible, and another dropped a large stone on his head.  Finally, they plucked out his eyes.  Thus Kyrmidoles died.  As for Gabriel [his brother] they threw him to the ground and one of the soldiers severed his right shoulder and then proceeded and cut off his head.

Now, consider the near identical patterns in the two accounts, separated by half a millennium:

Considering the Ottoman Empire and contemporary Pakistan are separated by culture, language, and some 500 years, how does one explain these identical patterns?  What binds them together?

Only Islam—Islam empowered, Islam in charge; Muslim majorities governing, and thus abusing their non-Muslim minority.  A fact of life, past and present.

(Thumbnail on homepage and illustration above assembled from multiple Shutterstock.com images.)