The False Narratives of the Obama Campaign

We know what we’re going to hear from the Democrats this week at their convention, and for the next nine weeks until the election. They clearly are having trouble making the case for their tenure, not even being able to articulate a consistent and coherent answer to the question of whether we’re better off than we were four years ago.

So they are going to have to somehow make the voters fear the unknown over their recent bitter economic experience. We’ve already heard the talking point from the president himself: that Romney is proposing that we go back to the bad, old, failed Bush policies that created the mess we’re currently in. In fact (like much of the Obama campaign strategy), it is a retread from 2008, when (on zero basis) the theme was that a McCain victory would be a continuation of the Bush administration.

Accepting this argument requires that two premises be acknowledged: First, that it was the Bush policies that created the mess; and second, that Romney’s proposals are a return to them. Both of these premises are false, but the Republicans have done a poor job of pushing back against either of them. If they don’t do a better one, there is some danger that they will actually gain traction with swing voters.

The first premise is not just false, but actually turns things on their head.

While a lot of the Bush policies (e.g., expansion of Medicare, an indifference to the deficit and spending, letting Ted Kennedy write the education bill, an attempt at amnesty for illegal immigrants with no serious attempt to control the border, taxpayer subsidies for energy companies, etc.) were regrettable, and in fact part of the reason that the Republicans lost the Congress in 2006 as a result of anger about them among his own base, they were not the cause of the downturn in 2007 and the financial meltdown of 2008. In particular, to attempt to claim that low tax rates caused an economic downturn is economic insanity. I have yet to hear any Democrat explain how this can occur, yet they continue to claim that the Bush “tax cuts” (which were not tax cuts, but relative tax increases resulting from the economic growth created by the lowered rates) are one of the causes of our current problems.

But it’s not enough to simply defend against the nonsense that Bush policies created our current problems. The Republicans need to go on the offensive and take back control of the narrative with the truth — that the downturn occurred as a result of policies primarily promulgated by the Democrats.

The real cause of the current mess (ignoring the upcoming fiscal disaster caused by uncontrolled spending and deficits) was the housing boom and bust. The boom was caused by policies going back decades to encourage people to buy houses they couldn’t afford and to coerce and extort banks to lend them the money to do so. While this had some support from Republicans, it was a policy primarily driven by Democrats. It wasn’t just the free hand given to Fannie and Freddie, something that the Bush administration attempted to rein in, but to no avail thanks to corrupt Democrats like Chris Dodd and Barney Frank. It was also the action of “community organizers” like Barack Obama, who himself sued Citibank in the 1990s to compel them to give out loans to people who couldn’t afford them. As The Independent pointed out four years ago, Democratic fingerprints were all over the housing crisis:

It’s true that the improvident lending was not initiated by Fannie and Freddie: their role in this was to buy these loans and sell them on – but then the music stopped. Cynical students of the American political system will note that the biggest recipient of campaign contributions from the munificent duo of Fannie and Freddie over the past 20 years was one Christopher Dodd, Democrat Chairman of the Senate’s Banking Committee.

Rather surprisingly, given that he has only been in the Senate for four of those years, the second biggest beneficiary was Barack Obama. In August the Washington Post reported that Obama’s presidential campaign team had sought the advice of Franklin Raines “on mortgage and housing policy matters”. Perhaps Mr Obama’s team just wanted to know where all the bodies are buried – there are rather a lot of them.

It should also not go unnoted that Fannie and Freddie had wide revolving doors for well-compensated “managers” with no apparent expertise other than being former Democratic officeholders.

But suppose you don’t buy this theory. Let’s instead just look at the empirical evidence. The Democrats like to pretend that the Republicans were in charge right up until The One™ came in to save us in 2009.

For instance, on The McLaughlin Group Friday night, Michelle Bernard slipped one past, and no one called her on it:

I think most Americans sat back this week and listened, heard a lot of really smart rhetoric, and also sit back and can’t help but think to themselves the day Barack Obama got elected; we had a Republican Congress that decided that their answer to governing, with the taxpayer dollars that pay their salary, would be to say no.

Note she states that the Republicans controlled Congress the day that Obama was elected, when the reality is otherwise, but inconvenient to the narrative of the media and the Democrats.

Here’s a graph that provides a good guideline to the collapse of the economy. 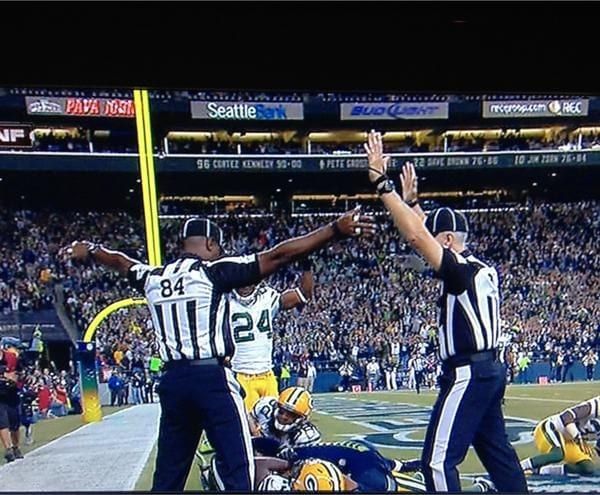 Average and median housing prices over the past three decades are a pretty good surrogate for the rise and fall of the housing market, whose collapse caused first the recession in 2007, as construction and durable goods orders dried up, and then the fiscal crisis as all of the bad mortgage paper came to light in the summer and fall of 2008.

Here is a very simple question for those who claim that it was Bush policies that caused this.

George Bush was in office from 2001 through 2009. If his policies were the cause of this, why did it take over six years, until late 2007, for the evil Bush to bear its poison fruit? Is there something else that happened around that time that might provide a better explanation? Let’s see, 2007, 2007…

Oh, wait! Wasn’t January 2007 when (Democrats) Nancy Pelosi and Harry Reid took over the Congress? Why, I think it was!

And what did they do to fend off the impending fiscal crisis? Not only nothing, but they precipitated it:

On Friday, regulators specifically fingered Schumer for IndyMac’s failure. The Office of Thrift Supervision said in its statement announcing the seizure that “the immediate cause of the closing was a deposit run that began and continued” after Schumer went public with his concerns.

“This institution failed due to a liquidity crisis,” OTS Director John Reich said Friday. “Although this institution was already in distress, I am troubled by any interference in the regulatory process,” a reference to Schumer.

Maybe it’s old news now, but it wasn’t covered well at the time, and it’s no older than Obama and the Democrats’ fantasies about Bush’s policies causing the problem.

As for the other false premise, that Romney will return to the Bush policies, well, yes, he wants to return to the policies that were working (keeping tax rates and regulation down, and get energy production up), and ditch the ones that were failures (e.g., loan guarantees). If he wants to wage war on this meme, it can be done very simply. All it requires is some healthy criticism of the Bush administration, the same kind that many Republicans were making in the summer and fall of 2006 that resulted in some of them staying home and allowing the disastrous Democratic takeover of the Congress, and explaining how his policies will be different. That would certainly cement my vote.

If Mitt Romney wants to fight back against the big lie, he needs to spend his newly freed ad money a) educating the public about the real history of our current fiscal mess, properly allocating the blame and b) pointing out the ways that he is not and will not be George Bush. The ad should feature the above graph, with a big tag on 2006 saying “Democrats Take Control Of Congress.”

Because he can count on the Democrats to continue with their own false narrative from now until November, with aid from their wholly owned subsidiary in the media. It’s all they have.