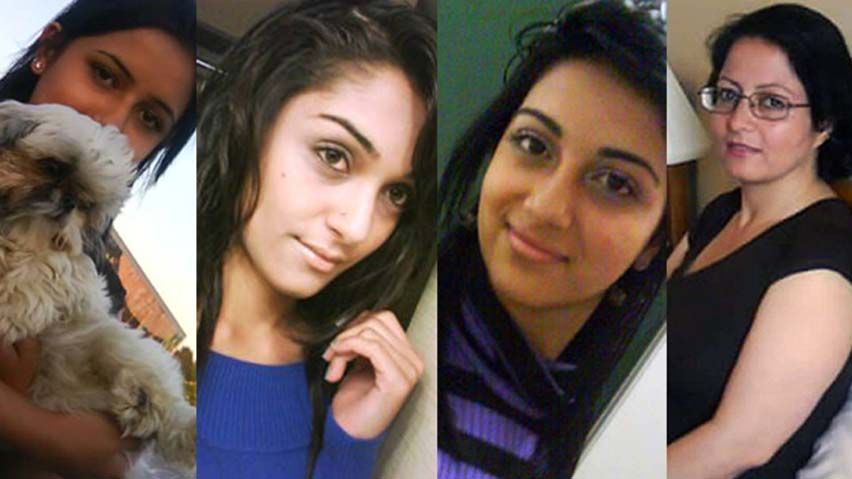 On Sunday, January 29, 2012, two years and seven months after the bodies of four Canadian women all from the same family were found murdered, after a ten week trial, and after fifteen hours of deliberations, a jury voted “guilty” to first degree murder for three other members of the Shafia family.

The three Shafias were tried under Canadian law for premeditated murder and for conspiracy to commit murder; no special “honor killing” related law was needed. This is as it should be and yet, if such a special law did exist, there might have been an “enhanced penalty” which might have maximized the sentences. However, Canadian law in general is lenient. They have no death penalty and there has been no capital punishment in Canada since 1962.

Still, true justice should have resulted in a 25 year sentence for each murder: one for Geeti, 13, one for Sahar, 17, one for Zainab, 19, and one for Rona Amir Mohammed, 52, instead of what amounts to about a minimum of 6½ years for each life taken.

Nevertheless, the case was vigorously pursued by the Canadian authorities on behalf of justice for four freedom-loving Muslim girls and women.

The Shafias are a prosperous family of polygamous Afghan immigrants who fled Afghanistan in 1992, took up residence in various Arab states and in South Africa, and then came to Canada in 2007.

Clearly, this was an honor killing and one that a biological mother, biological father, and biological older brother perpetrated. By definition, according to my own studies in Middle East Quarterly, the classic honor killing is that of a young daughter by her family of origin. This is not at all like Western domestic violence or even Western domestically violent femicide. Judeo-Christian families of origin in the West do not conspire to kill their young daughters because they are behaving in modern, western ways, i.e., are dressing in Western clothing, mingling with infidels, planning on higher educations, going on dates, attending parties, expecting to marry someone of their own choosing, etc.

These are all considered crimes of honor, which “dishonor” their families — and if intimidation, beatings, isolation, and stalking (all of which applied in the Shafia household) fail, daughters may then be honor killed.

Khatera Siddiqui (2006) in Kingston, Aqsa Parvez (2007) in Toronto, Amina Said and Sarah Said in Dallas (2008), Nour al-Maliki in Arizona (2009 ), and the three Shafia girls and one Shafia woman (2009) all committed such “crimes,” including refusing to wear hijab and refusing to marry a first cousin. All were murdered by their fathers or by their fathers and brothers. In two instances, their mothers lured them home.

This is even more true in Europe, where honor killing victims are viciously tortured to set an example to other daughters that this is what will happen to them if they disobey tribal and religious customs.

Although Hindus also commit honor killings, they do so infrequently in the West. Some Sikhs have perpetrated honor killings in Canada. One such high-profile case involved a British Colombian mother who sent her daughter abroad in 2000 where she arranged for her contract killing. Today, more than a decade later, Canada has issued an arrest warrant for the mother, Malkiat Kaur, to be extradited to India to stand trial for the murder of Jaswinder “Jassi” Kaur and for the attempted murder of Jassi’s beloved husband. Jassi’s crime? She fell in love with a social inferior and dared to marry him.

Some Muslim immigrants in the West still behave as if they are still living in Afghanistan, Pakistan, Turkey, the Maghreb, or on the West Bank. According to my 2010 study, 91% of the honor killings in the West were Muslim-on-Muslim crimes. Yes, this includes the honor murder of wives by their husbands and with the help of both their in-laws and their own family of origin. This is another kind of honor killing. These poor souls are almost double the age of the daughter-group. I discuss this in the 2010 study.

It is important to note that for the first time the New York Times, the Washington Post, and the Wall Street Journal did cover an honor killing case which involved Muslim perpetrators in North America. In the past, they failed to do so — or they focused on Hindu honor killings committed in India.

However, the Wall Street Journal, the New York Times, CNN, BBC, and the Washington Post all shied away from using the term “Muslim,” but did indicate that the perpetrators of these honor killings were “Afghans” and “immigrants”; they sometimes utilized the term honor killing but usually either in quotes or preceded by the phrase “so-called.”

The Huffington Post has published more than twenty articles in the last 24 hours on this trial. A quick review suggests that very few articles use the word “Muslim.” Some of the journalists include Supriya Dwivedi, Danielle Crittenden, Stephanie Levitz, and Ayaan Hirsi Ali. My Canadian colleague, Farzana Hassan, uses the word “Muslim” and addresses the cultural and religious tradition of honor killings:

Regrettably, far too many men raised in patriarchal settings regard their female offspring as liabilities. The birth of a female child is often marked with anxiety and dismay. Later on, the issue of family honour kicks in when the girl reaches puberty. In fact, the notion of honour revolves primarily around women and their sexuality and conduct. The men in the family are rarely subjected to the kinds of constraints their female relatives endure. It is mostly when the conduct of the women is perceived as dishonourable that matters worsen.

Interestingly, Ayaan Hirsi Ali does not use the word “Muslim” as she opines on this case. But she does make an important point, namely, that American justice may lag behind Canadian justice. Hirsi Ali cites the Arizona case of Faleh Almaleki, who was only convicted of “murder in the second degree.” However, Almaleki received a sentence of 34 years — and for only one murder, not for four. An additional point that one must make concerns Arizona’s failure to charge Noor’s mother as a co-conspirator. Texas made the same mistake in the Said case, as did Canada in the Parvez case.

There has been something of a silence, at least so far, on the part of the various North American Muslim associations.

However, CAIR’s Canadian chapter did a television interview about the Shafia case in 2011 in which its very seriously hijabbed representative, Maryam Dadabhoy, argued against the use of the term “honor killing.” She compared it to “domestic violence” and pointed out that far more incidents of domestic violence are occurring in Canada and elsewhere than are “racialized” honor killings.

But, as I have shown, the two are not the same and in any event, if we are talking about the West, or about North America, there are many more non-Muslims and non-immigrants living here and thus, of course, more incidents of domestic violence would occur as a mere matter of demographics. If we looked at Pakistan or Afghanistan, we would see a very different fact pattern.

Interestingly, Al Jazeera in English released few statements about the trial, but in its live coverage of the verdict, the reporter used the term “Muslim” and seemed supportive of the ruling.

Why do I obsess about the use of the word “Muslim”? I do so because too many Westerners are confusing this simple descriptor with an insult; too many Westerners have been intimidated by false concepts of politically correct, anti-racism into never describing a Muslim as anything other than a victim. Well, there actually are four Muslim victims in the Shafia case and they are all female. In order to honor that truth and hopefully to prevent further such honor killings, we must speak accurately.

Not all Muslims honor kill their daughters. But those who do are rarely punished in Muslim-majority countries. Most are “covered” by Shari’a law and by custom which despises the ways of the infidel. It is important that moderate and modern-oriented mullahs and imams call for the abolition of women’s subordination in mosque sermons. In 2011, the Canadian chapter of CAIR announced that Canadian Muslim leaders should issue a call against domestic violence. In my opinion, this should include an end to the normalized battering of daughters and wives, an end to the overly strict supervision of female behavior, and definitely, an end to murdering female family members.

I am not that optimistic. Canadian CAIR has finally issued a statement on the Shafia decision in which, as usual, they mainly point out that “everyone,” “all religions” suffer equally from such “domestic violence” tragedies, etc. Thus, they take absolutely no responsibility for the ways in which Muslims and Muslim immigrants commit a very specific kind of control over women and ultimately kill them when and if their women disobey their Old World tribal, ethnic, and religious customs.

Since the verdict has been announced, the lawyer for Hamed Shafia is appealing his guilty verdict on the ground of “media bias and hearsay evidence.” The lawyers for Hamed’s parents have also vowed to appeal.