When newly elected President John F. Kennedy was flying out of Hyannis Port, Massachusetts, he looked down at his father and said to a nearby assistant, “There’s the man who did all this.” Kennedy’s dad, like most fathers of presidents, played a massive role in the identity of his son.  And as the 2012 presidential election approaches, it would be helpful to look closely at the dads of today’s candidates. As psychologist Dr. Dale Atkins put it, “Our relationship with our parents is the ‘original’ relationship of our lives, the template for all other connections.”

There is no better place to start our look at presidential papas then with the father of our current president. President Barack Obama is featured in a new book that psychoanalyzes the world leader. George Washington University professor Dr. Justin Frank had previously written a negative book about George W. Bush in 2004, and this time he puts Obama on the Couch (which also happens to be the name of the book). 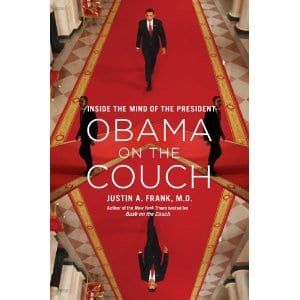 Frank focuses on what he calls Obama’s “father hunger.” He believes that Obama has made most of his decisions based on feelings from being abandoned by his birth father as an infant and his step-father at age 10. Frank argues that Obama has even tried to feed his dad-shaped hole with replacements like Jeremiah Wright and Vice President Joe Biden. Frank writes, “Obama searched for a father, for someone to relate to who could help him — a strong man who knew what to do.“

We know that Obama has reached out to know more about his Kenyan father and namesake. In his 1995 memoir Dreams from My Father, Obama quoted his half-sister: “I can’t say I really knew him, Barack. Maybe nobody did . . . not really. His life was so scattered. People only knew scraps and pieces, even his own children.” 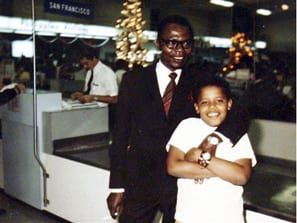 In Dreams, the reader discovers an Obama reaching out to discover a father to reveal the own mysteries within himself.  Author Sally Jacobs wrote about the father-son relationship between the two Baracks and also saw real issues:

In Dreams, you feel Obama Jr. struggling with [questions like] “Who am I? What kind of a man am I? What will I be?”

Frank believes that because Obama barely knew his father, he struggles with “obsessive bipartisan disorder.” According to Frank, Obama constantly wants to bring people together because his own family was always so broken.

In an interview with the Huffington Post, Frank argued counterintuitively that House Speaker John Boehner is Obama’s best therapist:

John Boehner is Obama’s ideal therapist. Republicans can knock some sense into him by making it clear they’re not really interested in working with him. They’ve been saying it for years but he refuses to accept it. That has to do with his inner wish to heal.

Frank says that a son is taught how to handle aggression in others by looking at his father’s example. Since Obama saw no example, he supposedly doesn’t handle Republican battles well since he is too naive. And Frank, a leftist, believes that Boehner can be the one to finally convince Obama that Republicans will never work with him. Of course, those on the Right contend that today’s Republicans are simply finally showing some backbone by sticking to principles.

Doug Wead, a presidential historian, has written extensively about presidents and their parents and has noted that sons typically try to complete what their fathers did or completely reject their parents’ values. Wead points out that children find it even easier to reconstruct their parents if they die early on in the child’s life:

We are told that children modify, distort, and reconstruct the image of their parents as an ongoing part of their internal thought life. This process is especially critical to a child whose parent dies early. Such a child has greater freedom to reconstruct a father or mother and then identify or counteridentify with that parent.

The young Obama clearly counteridentifies with his dad on being a father and husband. Obama Sr. was a horrible womanizer and was almost completely disconnected from his multiple children. President Obama is universally acknowledged as an excellent husband and father. But there are clearly other ways that Obama identifies with his birth father.

Obama Sr. was a socialist but became famous by speaking against leaders. He lost job after job because of his unwillingness to just get along. His son, on the other hand, seeks to quietly implement socialism-lite changes without being too direct. Today’s Obama, for example, is more likely to build a bridge to single-payer health care through Obamacare instead of foolishly trying to  force the whole program down the taxpayers’ throats. Though Frank doesn’t bring up socialism (surprise, surprise), he does point out that Obama “wants to be the father who makes change safe, the person he has waited for his entire life.”

While we can all be glad the younger Barack Obama is a good dad, we should all be more than a little concerned how much a non-existent father has warped his world view. Absent a real dad, Obama became a permanent child of the Left, questing for the impossible dreams of his father. As is the case whenever a parent abandons the son he brought into the world, here too it is ultimately society at large that will bear the burden.

Paul Cooper wears many hats but only some of them well. He is first and foremost a husband and father in a house filled with females (even the cat). He pastors a church, runs an online business with his wife, and does freelance writing that is usually conservative and from a Christian worldview. He would love for you to follow him on twitter: @PaulMCooper
Read more by Paul Cooper