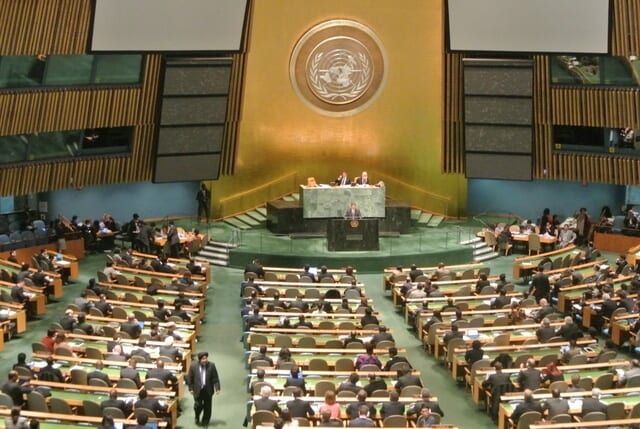 On August 25th, the first meeting of nations regarding the controversial UN Arms Trade Treaty (ATT) wrapped up in Cancun. The ATT was ratified by all nations in attendance except the United States, as the Senate has made clear that the U. S., far from being a party to this treaty, would not participate and would not ratify it.

Kansas Republican Senator Jerry Moran is the driving force behind the bipartisan coalition which said this treaty would be dead on arrival:

We made clear, in fact I led the effort, and more than 50 Senators signed a letter to the president saying “you shouldn’t be negotiating this treaty at the UN, and if you come up with a treaty we will not vote to ratify it.”

The problem, according to Ted Bromund in the Weekly Standard, is that the U.S. “got played.”

Nominally, the ATT is about controlling the illicit arms traffic, and about encouraging nations to take responsibility in whom they sell arms to. On its face, that’s a sensible idea. What isn’t so sensible is believing that a treaty will force nations to do what they evidently don’t want to do.

In theory, the treaty would force nations to declare their small arms imports and exports. Of course, no treaty is needed to do this. States could already choose to do this if they wished. This ambiguity is part of the problem, according to Moran’s office:

The specific impacts on the 2nd Amendment are unclear, but the intent to rein in 2nd Amendment freedoms is clearly there on the part of treaty supporters. The treaty language is so ambiguous it’s dangerous.

One of the chief proponents of this treaty is Mexico, which has long blamed the U.S. for gun violence south of the border, especially since the Obama administration allowed hundreds to thousands of guns to be “walked” into its country through the insane Operation Fast and Furious.

Looking at the guidance given to the administration by the Senate, it is unclear why the U.S. participated whatsoever in the Cancun conference. But the U.S. did, and certainly was not there to derail the treaty. Says Moran:

For them to participate in the conference in Cancun is just one more piece of evidence that they give credibility to a United Nations document that we’re not a party to.

Bromund, who was in attendance, said the conference president even managed to use the objections of U.S. Assistant Secretary of State Tom Countryman to “a new program of work for the secretariat,” which would collate “best practices on the implementation and operation of the Treaty.” By objecting, the “program of work” was entered into the conference record as something to consider. According to Moran:

The president used the recent on-air shooting deaths of two TV reporters to once again call for gun control, within hours of the tragedy. Giving him the authority of an ambiguous gun control treaty is a dangerous precedent to set for a president who has been anti-gun from the beginning, and has a history of executive overreach. Moran says:

The worry is that they’re going to use this as their policy, their guideline. This becomes the standard by which they require business to be conducted — even though the Constitution hasn’t been followed and the Senate hasn’t ratified the agreement. We have a president who doesn’t seemingly abide by the law or the Constitution.

Fortunately, it’s unlikely that the Senate will even take the matter up, let alone ratify it, according to Moran: