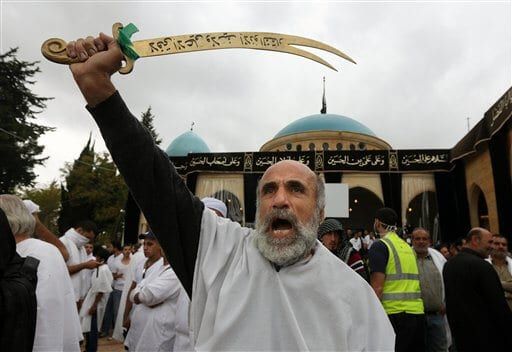 A Lebanese Muslim Shiite man chants slogans in memory of Imam Hussein during a march to mark the Ashoura holiday in the southern market town of Nabatiyeh, Lebanon, Tuesday, Nov. 4, 2014. In Lebanon, where sectarian tensions are high over the civil war in Syria, tens of thousands of supporters of the Shiite Hezbollah turned out in the group’s stronghold in southern Beirut amid unprecedented security measures. Shiites mark Ashoura, the tenth day of the Islamic month of Muharam, to commemorate the Battle of Karbala in the 7th century when Imam Hussein, a grandson of Muhammad, was killed in present-day Iraq. (AP Photo/Bilal Hussein)

Anonymous Israeli “military officials” have been handing out warnings that Hezbollah is turning southern Lebanon into a giant human shield for Hezbollah’s next war with Israel. These officials say that, while Israel will try to minimize civilian casualties, it can’t promise anything and can’t roll over and play dead before a barrage of Hezbollah missiles.

A New York Times report indicates that these officials particularly targeted the Gray Lady with information. Other reports, such as this one from Agence France-Presse, tell of a more general briefing for foreign journalists at the Israeli Defense Ministry in Tel Aviv.

The report also says Israel gave the Times “maps and aerial photography” showing that Hezbollah “has moved most of its military infrastructure into the Shiite villages of southern Lebanon and around their perimeters.”

In Shaqra, a larger village than Muhaybib with a population of 4,000, Israel “has identified about 400 military sites and facilities belonging to Hezbollah….” That is, a military site or facility per every 10 villagers.

“Effectively,” the Times says, “the Israelis are warning that in the event of another conflict with Hezbollah, many Lebanese civilians will probably be killed, and that it should not be considered Israel’s fault.”

Israel also pointed out to the Times that Hezbollah “has increased its firepower tenfold since 2006 and now possesses about 100,000 rockets and missiles. Most are short-range Katyusha-type rockets…but the arsenal also includes thousands of medium-range missiles that could reach Tel Aviv, and hundreds that could reach any part of Israel.”

In other words, in the next war Hezbollah — which gets its weapons from Iran and Syria — wants to shower Israel with a missile assault far deadlier than any that Hamas has been able to mount from Gaza, and is counting on deaths among its human shields to get the world to pressure Israel to “show restraint,” sue for a ceasefire, and generally not defend itself too effectively.

Why, though, is Israel sending out these warnings now? Hezbollah is deeply entangled in the fighting in Syria and has lost 600 men by Israeli estimates. Hezbollah’s ally there, the Assad regime, has lately been faring badly against the Sunni forces and some analysts think it’s in serious trouble.

Seemingly then, at such a stage, the last thing Hezbollah — and Syria and Iran — would need is to open another front against powerful Israel.

Part of the answer lies in the Agence France-Presse report on the Defense Ministry briefing in Tel Aviv, where an official told the gathering that “a nuclear deal with Iran allowing the Islamic republic to prosper economically would likely lead to more funding of its proxies in the region, such as Hezbollah.”

Both Israel and the Sunni Arab states have been telling the Obama administration that an easing of sanctions at this point means an emboldened, empowered Iranian axis and trouble for the whole region. The administration, though, doesn’t seem to listen and speaks of an immediate $50-billion “bonus” for Iran just for signing an agreement.

It could mean salvaging the Assad regime and, among other things, strengthening Hezbollah and increasing the chances of war with Israel.

In addition, Hezbollah can’t help but notice the success of the human-shields strategy used by Hamas in last summer’s war in Gaza. Although that strategy didn’t stop Israel from winning the war decisively, almost a year later Israel is still taking heavy heat for — despite extraordinary efforts, as acknowledged by Joint Chiefs of Staff chairman Gen. Martin Dempsey — an inevitable toll of civilian casualties in Gaza.

That “heat” is now taking the form of a much-publicized “report” by a shadowy, seditious Israeli group called Breaking the Silence; threats by the International Criminal Court in The Hague to investigate Israel for “war crimes”; and an upcoming “report” on the Gaza war by the systematically Israel-bashing UN Human Rights Council that will, of course, slam Israel.

And during the war itself, the Obama administration for a time embargoed arms to Israel in protest of the civilian casualties.

In a war with Hezbollah, vastly more heavily armed than Hamas and controlling much more territory, the stakes for Israel will be much deadlier. It’s doubtful that its efforts will succeed in stopping Western media and governments’ — in effect — collusion with the terrorists’ human-shields strategy. Israel will have to ignore the pressures as much as possible.