A Happy Ending (and Beginning) for a Brave Iraqi Friend

Between 2007 and 2008, I got to know a man in South Baghdad whose codename was “Bishop.” This is the short story of his life.

His parents were Kurdish Sunnis. They moved to Baghdad 34 years ago — recently married, excited to make a new life for themselves and create a family. Bishop’s real name is Bashar Akram Ameen; the name given to him when he was born on October 6, 1978, in the Abu Ghraib apartments in Baghdad. Bashar had three sisters and one brother. His schooling included graduating from a Baghdad high school in the class of ’96 and attending the Agriculture College of Baghdad University from 1997 until 2002 when he graduated. America had just set its sights on toppling Saddam.

Shortly after graduating, Bashar began service in the Iraqi Army Reserve, but that lasted only three months, because the U.S. crushed a great part of the Iraqi Army and then officially dissolved the rest. For three months, Bashar was one of those unemployed young men we worried about. He got a job in October 2003, as a bodyguard for an Iraqi judge. His first job didn’t last long because insurgents assassinated the judge. Feeling lost and a bit frightened, Bashar decided to look for a “safer” job, and began interpreting for, as he called it, “the Sally Port Security Company” in al-Mansour, Baghdad. Insurgents in his neighborhood figured out that he was working for an American company, and on February 21, 2006, as he left his job at 6:00 pm, they started shooting at him in his car, “… but I miraculously survived,” Bashar explained to me, “and that was the reason to leave my job at that company.”

His own safety, and therefore that of his loved ones, was in jeopardy, and so, as Bashar recalled, “I quit visiting my family for over four months.” Though he had used caution, his family was forced to flee in order to avoid imminent suffering or death from the insurgents. Bashar explained, “They had killed our neighbor’s son, so their father gave the key of his house to my father to keep the house safe until maybe the situation getting better. Then, on the next day, the same killers of our neighbors came to my father and asked him about the key, so he refused to give it away and he said that he don’t have it and he don’t know anything about it.” The insurgents warned Bashar’s father that they would check the validity of his information, and if it was untrue, “they will teach my father and us a lesson.” His family, doing what they must to survive, reluctantly left their home. Bashar wrote to me, “My father packed some basic stuff and moved from our own house in Ameriya, Baghdad; Iraq.”

By now, the civil war was raging in Baghdad.

Not everything was so bleak. Even at the height of the civil war, life went on. Bashar met a woman named Alyaa, who worked in legal administration at the “Sally Port Security Company.” They courted for a year, and got married on September 14, 2006 — all the while, sectarian violence raged around Iraq. A year later their first son, Mustafa, was born. Around that time, however, the local Shia militia (called Jaish al-Mahdi, or JAM) figured out that Bashar, who is Sunni, had worked for the Americans at Forward Operating Base (FOB) Falcon (where he got the codename “Bishop”). “They began coming around to bother my wife while I was at work,” he recalls. “So we moved again to live in al-Mansour, Baghdad. And since then, I stopped making any type of relationships with the neighbors just because you can’t trust anybody. In al-Mansour, we had very quiet time …”

And so Bashar began working for the American Army as an interpreter, for various units, at the time of peak fighting. I first met Bishop when he worked for 1-4 Cav in South Baghdad. The 1-4 Cav soldiers kept Bishop busy, working him hard, and he became one of the team. As the months rolled by and I came back to 1-4 on several occasions, their area had become quieter and quieter until, really, there was nothing going on except progress. The younger infantrymen were proud of the progress, but wanted to get up to Mosul or out to Afghanistan, where the fighting was. But not Bishop. He’d seen the worst of it and did not want to see any more war. He was old beyond his years and wanted peace. 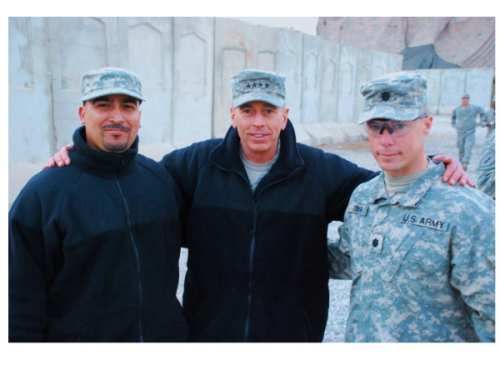 The two most dangerous jobs for Iraqis were probably journalist and interpreter. Bishop wanted to come to the United States. As a result, 1-4 Cav Commander, LTC James Crider, and some of the soldiers Bishop had worked with helped with the paperwork.

Just a small aside: LTC Crider and his battalion were serious contributors to success in Iraq. I got e-mails from LTC Crider about his struggles with Iraqi bureaucracy on behalf of Bishop, even after he went home to America. I’d seen this LTC Crider go to bat for Iraqis over and over again in Iraq. In just one example, Crider and his staff waded for months through the Iraqi legal labyrinth to try to free a man who had been wrongfully detained for a bombing he could not have committed; the bombing had never occurred. Crider and his battalion were welcome fixtures in that neighborhood, because he and his men had brought peace and serenity to a place that had previously been one of the most perilous places in Iraq. The last time I was there, I walked around with no body armor or helmet, and bought popcorn on the street. (I was just there again on about November 15; the progress continues without violence.)

I heard that many Iraqis cried when 1-4 redeployed to America. One captain had even been offered a home if he would come back to live in the neighborhood. The captain knew how to get things done, while still making the time to learn the names of every kid there. And he knew their mothers and fathers, too. But that was it; 1-4 went home and Bishop was left behind, with his family scattered by the war.

His father died in July 2007, his mother and two sisters still live in Baghdad, his brother in Kirkuk, and another sister in Syria.

LTC Crider and others struggled — and struggled — and finally succeeded. On November 6, 2008, Bishop emigrated to America, landing in Nolensville, Tennessee, along with his wife, Alyaa (who is carrying their second child), and their son, Mustafa. And the amazing 1-4 Cav keeps winning battles, without firing a shot, long after leaving the war.

So now, Bashar is no longer “Bishop,” and he has begun an American life, with the many ups and downs we all have to face. His next fight is to find a job in our troubled economy and overcome a high-voltage dose of culture shock. He will come to understand that our culture is just as complicated as the one he left behind — but without the violence, threats, and scars of war.

Many people have welcomed him to America. I think Bashar can be of particular value to America at this time, simply by getting on the radio stations and talking to reporters and telling his story — the story of Iraq — and showing people how it really is over here. (I write this from Iraq.) Perhaps he can explain why many of us think that it was all worth it. I asked Bashar if I could publish his e-mail address, and he agreed.

This is not just a happy ending, but a happy beginning. Please welcome this new family to America and pass this story to your local papers and radio stations. Ask them to talk with a real Iraqi who just got here. People need to know what happened in Iraq.

Bashar can be reached at: [email protected]

Michael Yon, author of Moment of Truth in Iraq: How a New 'Greatest Generation' of American Soldiers Is Turning Defeat and Disaster into Victory and Hope, spent more time embedded with U.S. and British combat troops in Iraq than any other correspondent. Michael Yon has changed his focus to Afghanistan.
Read more by Michael Yon