The Real Narrative of the RNC Protest: Will Anyone Remember?

Back home from days of wandering among the protesters at the Republican National Convention, I watched the speeches of Condoleezza Rice, Susana Martinez, Rand Paul, and Paul Ryan Wednesday evening with particular interest. I had flown back that morning and had taught my classes on the first day of the semester. I had just gone over my freshman composition syllabus, so was struck by how much the speakers repeated the distinctly American themes expressed by such authors as Benjamin Franklin and Alexis de Tocqueville.

If I could have, I would have made the evening of speeches (on CSPAN, without the PBS spin) an assignment for my students.

Reviewing the syllabus, I waxed poetic about the readings we’d be doing and how they exemplify Americanism. I told students about my official immigrant status (at age two from the former Communist Yugoslavia) and how Tocqueville understood the distinctly American spirit.

One of the things he understood was that in America there was no such thing as a peasant, which I had to define for students. But I understand firsthand the attitudes — the resignation, the sense of inferiority — that come from being born into that class, for that was the class of my parents and of my Ukrainian friends.

And then on Wednesday night the speakers, one after the other, struck that same theme. “We built it” was the resounding refrain in response to President Obama’s recent assertion that government makes success possible. We can build it — and you can build it — was the optimistic message.

I thought back to the disenfranchised protesters in Tampa. The showing was pathetic; my friend and I counted 200 at the most for any given rally or march. Fifteen thousand reportedly were expected. Most news outlets reported a vague “hundreds” actually showing up.

The showing was a combination of professional activists, the homeless, the schizophrenic, the addicted, and the disenfranchised young. A Voice of America article that claimed “hundreds” of young people took to the streets of Tampa this week is true only if one holds a very loose definition of “young.” 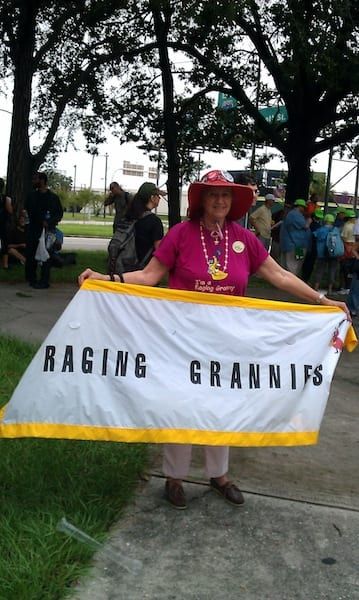 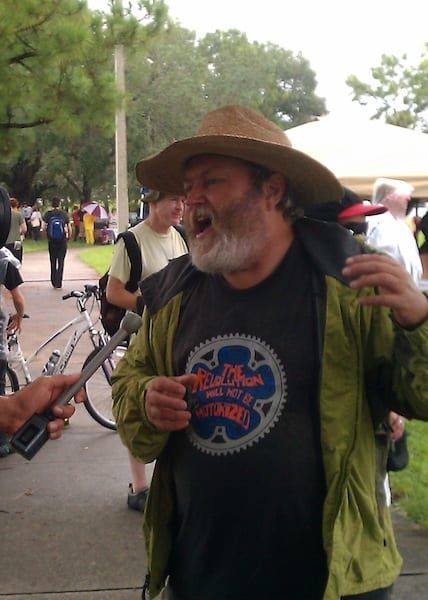 These were the same kind of people who participated in the Occupy protests last fall. At Camp “Romneyville,” there was the feel of adolescent drama, with protesters wearing helmets and bandanas around their faces. “Medics” were marked by crosses made of red electrical tape on their clothes. Most of the women were tattooed. One svelte young woman hung out in a tent in nothing but a pair of low-cut shorts and a black bra. A man wandered around smoking a joint. A good number of people sucked desperately on cigarettes.

Someone was fast asleep in a tent next to the stage with a very poor, but loud, sound system, where the unfocused message about the 99%, the bankers, and the Republicans blared. Someone strummed a guitar, commented on the police helicopter overhead, and sang about the “warfare waged on us by the 1%” and the lack of public transportation.

A young man stood with a black bandana around his mouth because, as he said, he “could.” 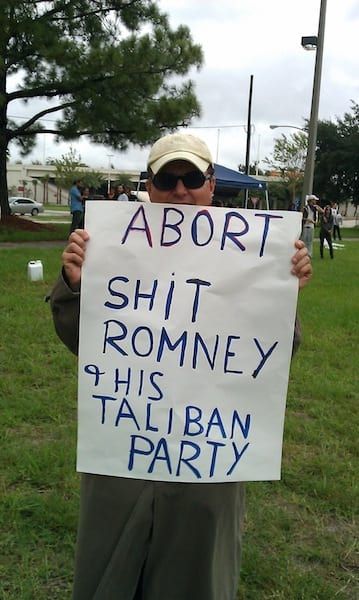 An elderly man in very dirty clothes from the “Rainbow Family” claimed to be from the original “Beatnik school.” He was very friendly and talked with us at length about previous protests (a “strong anarchist scene” in Minneapolis in 2008), even giving us his phone number, before he went up on stage to recite his “poetry.” He told us that he was running the “kitchen,” a table in the encampment. The stench arising in the Florida humidity, however, would be enough to spoil anyone’s appetite. We wondered about diseases.

Armies of friendly police stood placidly a ways off, watching to make sure the children didn’t hurt themselves or the poor denizens of one of the most blighted areas of Tampa. On Thursday, I would learn that they sent over 100 boxed lunches to the hungry protesters. Yet, a couple nights earlier, a reporter had presented the place as a post of freedom against a veritable police state. The shots of Romneyville tents lined up against a moonlit Tampa skyline made it look serene.

Reporters seemed to equal protesters in number, and they seemed desperate to get a report, a story, that fit the overarching narrative. It was a bizarre sight to see a reporter from a major network interviewing a homeless person about the presidential race.

During the three days, I saw pro-Obama signs. While candidate Mitt Romney was vilified for the bad economy, not one sign or speech attacked Obama.

Back in the 1960s, Communists supported efforts to dupe vulnerable, troubled teenagers. In Tampa in 2012, there were the elders from the communist-supporting National Lawyers Guild and ACLU, identified by their hats and literature. There were a few people wearing union t-shirts. I saw a representative from MoveOn.org. There were at least four people from Pennsylvania Working Families. There were representatives of gay rights groups, like www.getequal.org. Dream Defenders was there, still agitating for Trayvon Martin. There were the Raging Grannies, and Code Pink everywhere, with Media Benjamin leading the same half-dozen women often dressed as giant vaginas.

On Monday in Perry Harvey Park, a young woman from the resuscitated Students for a Democratic Society stood on stage and repeated the popular line from college classes about imperialist wars. She then led a chant: “Education is a right. Fight, fight, fight!”

A student from the Student Labor Action Project, which is a unit of Jobs with Justice, addressed the audience, “men and women and those who do not conform to gender.”

A “Rock the Vote” bus drove near the protest site in Ybor City on Tuesday. Rock the Vote is getting a benefit concert at the Democratic National Convention by the Foo Fighters. A look at the issues confirms a partisan mission.

President Obama is desperately courting college students, luring them with promises of loan subsidies. He was turned away from the campus of the University of Virginia. But this president, in an unprecedented manner, has imposed himself into school rooms across the nation by delivering a message directly to children in his annual back-to-school speech. Four years ago they were too young to vote. Not now. But you have to wonder about political candidates who have to rely on the support of the “youth” and children.

The Democrats also have the support of teachers and professors. At Ohio State University, an English professor sent a message to colleagues imploring them to allow an Obama campaign worker to address their classes. Textbooks now present the words of Obama as hallmarks of eloquence.

“Youth Vote Remains an Elusive Target for Republicans” reads the headline in the Chronicle of Higher Education. The enthusiasm among young voters is waning, but Obama still holds a lead. The reporter quotes Susan MacManus, a University of South Florida political science professor who “moderated an independent panel discussion … hosted by the Young Invincibles, a nonprofit youth advocacy group.”

The name “Invincibles” implies bravery, resourcefulness. Yet, a look at the web page reveals that the organization is “fiscally sponsored by the Center for Community Change, a longstanding organization committed to building the power and capacity of low-income people across the country.” The partner organizations are a Who’s Who of the far left. Student debt is the appeal on the main page, yet the message is that we need more college graduates.

Young voters — because of the education they’ve received — are vulnerable to such appeals. The SDS, reincarnated by the original members of the SDS like Tom Hayden, Carl Davidson, and Mike Klonsky, is something new to most of them. Only about two of my students had even heard of the SDS. The web site states that SDS has merged with Occupy Colleges based on “common principles of participatory democracy.”

“Participatory democracy,” of course, is a euphemism for soviet democracy (another part of history students are not likely to learn) and it comes from the manifesto of the original SDS. But students are taught that protest is a sacred American rite. It’s in their lessons about the 1960s. Virtue is presented as synonymous with fighting corporations and Republicans on behalf of the oppressed.

Civic discourse has been abandoned for the shouted slogans at rallies and heckling. At conferences, English teachers and professors discuss ideas for incorporating the “rhetoric” of protests into their lesson plans. The idea of civic duty through military service or traditional volunteer agencies has been replaced by college-sponsored “community service.”

College students see a bleak future with a lot of debt. The only hope they have, they are led to believe, is from the government, the government that will subsidize their educations and provide jobs. They are supplicants, like the peasants of yore to their lord. But as I mentioned earlier, few college students have heard the word, much less understand how such a class is being created in the United States.

I have witnessed firsthand media attempts to make something out of nothing. I know also that what will be presented in the history lessons will not be the reality, which is the pathos of a fizzled movement by a sorry group of people. Instead, like a New York Times lesson plan peddled to teachers, students will be expected to debate in all seriousness inane slogans like “We are the 99%.”

No, they definitely are not. That is the lesson of the anti-RNC “protests.”