The Occupations: Anarchy Waiting for Crisis

It’s the beginning of week two of the copycat Wall Street “occupation” in downtown Atlanta, specifically in Woodruff Park, which the protestors have rechristened Troy Davis Park, after the recently executed cop-killer. I’ve covered some Tea Party events, the point of comparison by some commentators.

Not only did I see for myself that the comparison was illegitimate, but I saw something disturbing that has been missed in the coverage. The situation could end with occupiers concluding their protest playtime by sputtering about “corporate greed” as their parents drive them home from jail. Or some of the little-noticed elements could begin something that harms innocent people.

Most of the occupiers seem to be nice people. Indeed, the atmosphere was akin to a hippie art festival. Cardboard signs, amongst about fifty tents, proclaimed various vague grievances. A colorful variety of people milled about among the homeless, the unofficial permanent inhabitants. Next to an obviously troubled homeless woman with matted hair lying on the bare ground still damp from the previous few days of rain, a sixtyish couple in Land’s End-style attire dismantled their tent. One long-gray-bearded man dressed in buckskins rode his bike with signs complaining about tobacco companies and the slaughter of the buffalo. A group of about six young preppie guys tossed around balloons. Four young men, looking more counter-culture-ish, wore bright orange t-shirts that said “Cop Watch.” A homeless man was at a table slapping peanut butter and jelly on bread. Three fashionably dressed college age women tried to keep their dresses down in the wind as they picked up trash. Accompanying the constant piped-in elevator-jazz music was a tune beat out on a bucket and tambourine by campers.

A section of wooden fence invited: “What’s your story?”  n Magic Marker were litanies about job loss, foreclosure, and a specific complaint about “bank fees, airline bag fees, and overcrowded classrooms.” A student from neighboring Georgia State University introduced himself and sold me a paper by the International Socialist Organization, which he pitched as a misunderstood group simply wanting “reform.” I asked him if many GSU professors were helping with the occupation. Oh, lots. He named one, but then seemed to think better of it. 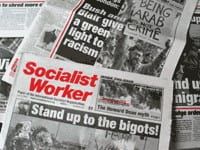 Friday’s event was a march to the Peachtree-Pine homeless shelter that is being purchased by Emory Healthcare. The shelter is across the street from Emory University Midtown Hospital, both about a mile away from the encampment.

The gathering began at 5:10 p.m. with a young man who began the “mic check” sans actual microphone in the now standard way by having the audience repeat his words. He announced a lawsuit against Emory, the target of ire, along with “corporate interests” and the Chamber of Commerce. Somehow bullhorns materialized and three stern-looking men wearing bright orange construction worker vests used them to give testimony about how they became homeless. Lined up behind them were some even sterner looking men with shirts reading “Security.” In over an hour of wandering around the park I had not seen one police officer or real security guard. 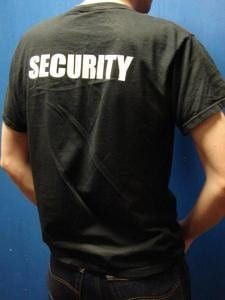 Noise-makers were passed around after instructions were given. A few well-beaten plastic buckets were put to use as drums, and a trumpet and guitar joined in to the tune of the chant, “Emory, we’re here to say, Peachtree-Pine is gonna stay.”

I stayed behind a few paces of the crowd that numbered about three hundred. They loudly made their way up Peachtree Street through downtown Atlanta.

Again, not a cop in sight.

The marchers spilled into the street, blocking both of the two right lanes, forcing northbound traffic to stop. One of the marchers waved wild traffic directions from the rear.

Observers on the sidewalk and in cars held up cell phone cameras to record the merriment.

We had gone several blocks when I saw three police officers congregated on the sidewalk in the vicinity. I overheard one say there was a protest “or something” going on. She seemed surprised.

But as happens, an ambulance and then a few seconds later, a fire truck, needed to get through the traffic. With the narrow street congested with marchers the emergency vehicles had to stop and blare their horns. I could see frustration in the firemen’s faces in the stopped truck.

And just as quickly, three young men in orange “Cop Watch” t-shirts, who were walking on the opposite sidewalk, had video cameras zeroed in on this policeman heroically getting emergency vehicles past marchers and traffic.

The Cop Watchers continued to vigilantly hold up their cameras as we made our way to the homeless shelter, where a number of the homeless men held up signs saying, “Emory hates black men.”

The chants continued but it was to the choir of the homeless, so to speak, so the crowd soon crossed the street to the hospital. Still shouting and drumming, they rushed and blocked the hospital entrance.

A security guard’s orders to leave, as bewildered hospital visitors pulled up, did not seem to have much effect, nor did a single policeman’s orders. When about a dozen police officers showed up and notified the marchers that they were were on private property, the crowd slowly made its way across the street, drumming out a chant about private property being public property.

The police officers stood across the street from the crowd, and so did the Cop Watchers, holding video cameras in policemen’s faces.

It seemed that the chanting would be going on for some time, and one police officer had already mistaken me for a protestor, so I made my way back to Woodruff Park.

The tent city was not deserted.The PB&J guy was there, someone was drumming, and the usual character types were milling around. The woman who had been lying on the ground was sitting up.

But around 6:30, as I was about to head back to the train station, flashing blue police lights caught my eye and the chanting, clanging crowd caught my ear. Coming down Peachtree Street were about a dozen police motorcycles clearing the way for the occupation marchers.

The police disappeared after they had ensured that the protestors had gotten back into the encampment safely.

As I watched the ragtag group file in, escorted by police, I remembered a Tea Party rally in front of the state capitol in downtown Atlanta, only a few blocks away. There the police and state troopers were omnipresent amidst a group of suburbanites occupying flag-adorned lawn chairs on the sidewalk and listening to speeches about politically legitimate efforts in overturning health care legislation and enforcing immigration laws. Complaints from the podium were specifically about government actions, like taking over the private company, General Motors.

Back then, amidst the flags and bunting, the police were omnipresent, with prison vehicles at the ready and parked along the streets that were the pathway to the prearranged site. Police were omnipresent as the Pledge of Allegiance was recited. They were quite visible as the National Anthem and America the Beautiful were sung, and as prayers for our country were sent up to heaven.

The police stood around, looking relaxed.

The Tea Partiers never blocked a street, and left quietly down the sidewalks after their allotted time, leaving no traces, picking up trash that may have been dropped inadvertently.

The Tea Party never occupied public land illegally. They assembled peacefully with permits arranged beforehand. Yet the media repeatedly characterized them as “angry,” “extremist,” and “racist.”

The police officers probably welcomed the Tea Party gigs as a respite. In contrast, I can only imagine the indignity of having a punk holding up a camera in your face as you try to protect a hospital from a mob. But the Soros-supported organization, Cop Watch, trains extreme leftists to create or exacerbate conflicts with police and record them in order to make claims of police brutality. These guys seemed to be itching for valuable footage.

The morning after the lawless march, the Atlanta Journal-Constitution top front page story declared, “Activists insist they’re not leaving, not afraid” and featured a photo of a Georgia State student at her computer in her tent doing her homework. Contrary to what I saw, the story was about a peaceful group’s efforts at “tightening the message.” There was no mention of Cop Watch or held-up emergency vehicles. The previous evening, right after the march, a story appeared about Democratic Atlanta Mayor Kasim Reed revoking his earlier “executive order” to vacate by Monday the public park protestors had been occupying in violation of a city ordinance. The occupation spokesman, Tim Franzen, had expressed defiance about the deadline, but now a mayoral spokesperson said the original order had never been “set in stone.”

I wondered what would have happened had the Tea Party pitched their tents in the same park. Of course, the Tea Party would never do that and if one wants to draw one distinction between the two groups it is that the Tea Party respects the law and the law-making process as set up by the founders.

Cliff Kincaid in his recent coverage of the Washington, D.C., occupation astutely points out that law-abiding citizens and visitors are being denied access by the illegal protestors. The taxpayers also will be paying for extra security and clean-up.

But what I saw in Atlanta went beyond the infringement of our rights to use a public park or museum.

I have no doubt that the occupiers keeping up with their homework or reliving the 1960s would feel bad were they to find out that because of their actions a person died. I might be accused of overreacting, but remember the first march in Atlanta which went to Bank of America drew only a reported fifty participants. Friday’s march had been announced in the newspaper and the crowd had grown to 300.

Is it endangering public safety to allow an anarchic group of young people, the homeless (often with mental health and substance abuse issues), and ne’er do wells to take to the streets on their own?

Although these people, in their ignorant quest for the SDS-recycled “participatory democracy,” earnestly seek to be cooperative, they hold an inchoate anger.

Their aims are unfocused, but revolutionary. But the police have been put on the defensive, ordered by their boss to “keep a low profile,” and bullied by the lawbreakers with their expensive recording equipment.

To what level will the occupiers take their complaint? So far they have used their bodies and voices. But crowds are intimidating and unpredictable.

Unlike the Tea Party these protestors do not seem to have jobs to attend or families to take care of. They have time on their hands. And they are becoming more emboldened.

In the face the Obama administration’s illegal actions, from the “gun-runner operation” to allowing the Black Panthers to intimidate voters, I worry about mayoral allies’ “hands off” approaches to dealing with law-defying mobs. And one Democratic governor has made a suggestion about postponing congressional elections.

But I know what I did see: a mob of lawbreakers impeding those who were trying to save lives. And there was no punishment.

Related: “Yet more overt anti-Semitism at Occupy Los Angeles“