Bridesmaids is like virtually nothing you’ve seen before — a bridal shower of dirty jokes. Whether it represents a giant step forward or backward is subject to question.

The film, which stars and is co-written by the siren of SNL, Kristen Wiig, was also produced by Judd Apatow, whose touch is evident. The typical romcom formula of a sweetly endearing heroine whose major problem is which handsome swain to marry is, for once, discarded with a glee bordering on venom.

Wiig plays Annie, a barely employed jewelry-store saleswoman whose life’s ambition to run a bake shop foundered, leaving nothing but an empty storefront. She doesn’t have a boyfriend; instead she has a bedtime partner (superbly played with an evil streak by Jon Hamm, the star of Mad Men) who kicks her out of the house after sex. 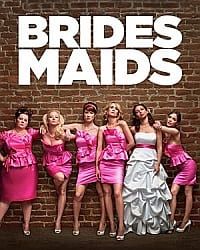 Even this early on, Bridesmaids is getting uncomfortable laughs; aren’t handsome curs like Hamm supposed to be charming in a roguish way, like Hugh Grant in Bridget Jones’s Diary or Chris Noth in Sex and the City? Hamm is instead an irredeemable snake, a man who mistreats women simply because his good looks enable him to.

Yet far worse is to come for Annie as she helps plan a wedding for her best friend (Maya Rudolph). In a very funny scene that has much to say about the way women compete with each other (rather than support each other in the gauzy, we’re-all-sisters way of Sex and the City), she meets the bride’s other best friend, the beautiful, rich, and stylish Helen (a perfect Rose Byrne), and each tries to prove that she’s the one who is really closest to the bride in a painfully extended toast-off in which neither will let the other have the last word at the microphone. Anyone who has ever heard young (or even not-so-young) women talk in minute detail about their ongoing feuds with various friends, ex-friends, or “frenemies” will recognize that there is a lot more truth here than there has been in the last few Jennifer Lopez, Jennifer Aniston, or Katherine Heigl films. Later in the movie, when things get really bitter, Helen will tell Annie that  instead of publicly issuing insults, Annie should have chosen the more normal option of pretending to be civil in person but then saying mean things behind Helen’s back. This, too, stings.

Are women ready to be shown as such petty and vindictive souls? Maybe not. Annie isn’t just a bad bridesmaid in a cute way; as the movie goes on, she misbehaves so badly on a flight to a bachelorette party in Las Vegas that she gets the entire group thrown off a plane and placed on a bus back home. Then she ruins the elegant party Helen hosts in the bride’s honor.

And in a scene that will soon be legendary in the history of gross-out humor, Annie is responsible for an endless bout of gastric distress that afflicts everyone in the wedding party except for the borderline anorexic Helen. In this scene, as in the rest of the movie, Melissa McCarthy (the star of the CBS sitcom Mike & Molly) proves to be as outrageous as Roseanne Barr was in the 1980s, but with a touch that ultimately makes you respect her for being as confident and in-your-face as she is. McCarthy’s character, a bridesmaid who spends the movie hitting on guys inappropriately, stealing puppies, and making obscene jokes, comes into sharp relief in a scene in which she explains how she was tortured in high school and resolved to make a success of herself anyway.

It’s a creative gamble for Wiig and Apatow and their director Paul Feig  (who created Freaks and Geeks) to ask female audiences to laugh at crude fraternity-style humor in which women are central to the action instead of serving as the voice of maturity as they are on sitcoms like Everybody Loves Raymond. Moreover, frat humor must get continually more extreme in order to keep being shocking; 1978’s Animal House would be far too tame for today’s young moviegoers to be a big hit in 2011. But women comics have long complained that if only the male-dominated comedy scene in Hollywood would let them be themselves and mine their unglamorous real lives for material, they could create far more interesting movies than formula fare like Maid in Manhattan or Something Borrowed. We’re about to find out whether audiences truly want chick flicks to be more like Seth Rogen movies, or if they’re more comfortable with the cute and  trite.

John Boot is the pen name of a conservative writer operating under deep cover in the liberal media.
Read more by John Boot
SHOW COMMENTS