In weeks leading up to “Earth Hour” on March 27, my bank, Wachovia (Wells Fargo), was urging customers to “turn off your lights.” My local branch of the bank had been been plugging this event to all members in ATM and in-house displays. 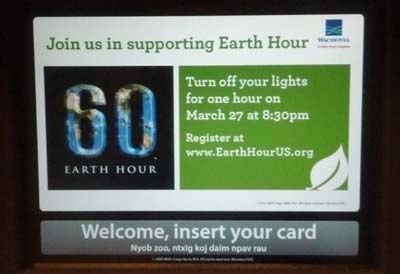 As a matter of fact, the bank is on the record supporting climate change action (according to their Environmental Initiative statements online.)

To test the company’s actual commitment to “Earth Hour” and climate action, I visited my local Wachovia branch office during the critical hour — March 27 at 8:30pm ET.

I discovered that they were hiding under their own campaign! 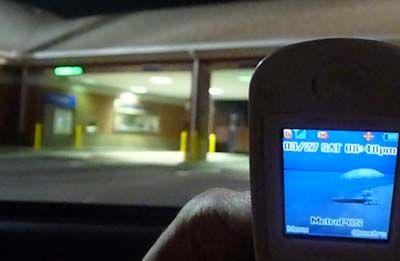 Every light was on — inside and out.

I’m not unhappy that Wachovia refused to participate in Earth Hour, and chose to celebrate Human Achievement Hour instead. But I’m outraged at the hypocrisy of urging members and customers to participate in yet another example of “do as we say and not as we do” philosophy.

Worse, Wachovia claimed on their ATM ad that they “support Earth Hour,” yet, clearly, they are only campaigning on an enviro-slogan. When the time came to turn off the lights themselves, they didn’t. Perhaps there are good reasons why a bank would want to keep its lights on at night — look prosperous and vibrant, deter crime — instead of looking like they’ve been victims of a power failure or, worse, were unable to pay their electric bill.

Maybe the Wachovia folks, just like the rest of us, don’t want to sit in the dark for an hour, thinking of what life would be like without electricity.