Who Will Be the Thought Police for the Police? 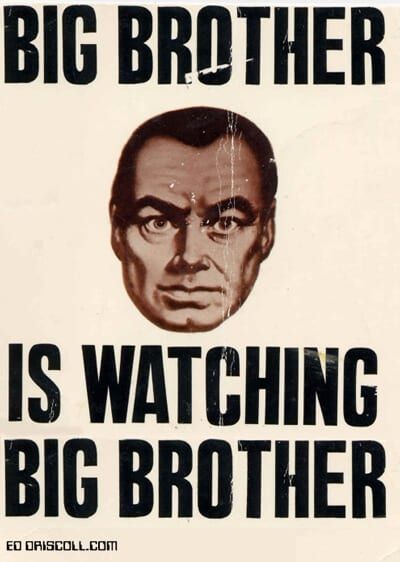 The San Francisco Police Department has two separate but related scandals on its hands, the first a genuine one involving allegations of serious corruption, the other involving what amount to thought crimes against modern notions of political correctness.  Nowhere in America are those notions more rigorously observed that in San Francisco, so it should come as no surprise that in some quarters the latter scandal is regarded as more serious than the former.

Last year, six SFPD officers were indicted in federal court for stealing from drug suspects.  One of the six, now-former Sergeant Ian Furminger, has been convicted and sentenced to 41 months in prison.  He has appealed his conviction and is out on bail pending the outcome of that appeal.  In opposing Furminger’s motion for bail, federal prosecutors disclosed text messages he had exchanged with coworkers.  Fourteen officers, none of whom are implicated in acts of corruption, now face being fired for having sent or received text messages indicating they harbor bias against this or that demographic group.  And the district attorney in San Francisco is conducting a review of thousands of cases, searching for evidence that the supposed bias revealed in the messages resulted in wrongful arrests and convictions.

There is no denying that the messages are crude and offensive, laden as they are with pejorative comments about blacks, Hispanics, and homosexuals.  But some questions occur, the first of which of course is, now what?  If investigators cannot prove that these officers acted on the perceived biases reflected in the text messages, on what grounds can the cops be removed from their jobs?  And if these officers are indeed fired, should every other member of the Police Department be forced to submit his text messages for evaluation by the Bias Inspectors?

And what then?  Suppose some pair of officers exchanged texts while off-duty and watching the recent events in Baltimore.  If one of them referred to the rioters with the now-prohibited term “thugs,” should he be lose his job?  And if the recipient of such a text failed to upbraid his colleague for using for so offensive a term, and to remind him that those rioters were merely engaging in constitutionally protected protests against injustice, should he be fired as well?  Where would it end?

Some years ago I was working a narcotics enforcement detail in one of the grittier sections of Los Angeles.  In that part of town was a public housing project, within and around which we devoted much of our efforts.  But such was the geography of the area, and such was the sophistication of the drug operation being conducted, that we were frustrated in our efforts to rid the neighborhood of the people who caused so much misery for the many decent people living nearby.  Lookouts were posted blocks away to alert the dealers of our approach, and though we dressed in grubby clothes and drove beat-up unmarked cars, all of our faces and all of our cars were well known among the drug dealers.  No sooner did we make the turn from the nearby major street than the whistles began, accompanied by shouts of “one-time” and “five-oh.”  And by the time we made it into the housing project, the dealers had scattered like so many roaches when the lights come on in a dirty kitchen.

There were times when my colleagues and I would sit in our office and strategize on how we might innovate and gain the upper hand against what seemed to be an intractable problem.  Very often these conversations would devolve into the airing of fantasies involving, let’s just say extralegal, ways to address the problem.  Some of these fantasies involved sniper rifles, others involved helicopter gunships, napalm, and Claymore mines, the use of which might have met the approval of those residents who called our office daily and begged us to do something about the drug dealing.

At another point in my career I was a patrol cop in different part of South Los Angeles.  I was working the night shift and my locker was next to that of one of my sergeants.  When he and I changed into our uniforms before roll call, it was habit upon closing his locker to turn to me and say, “Okay, kid, let’s go kill somebody.”

Over the years we worked together, we both had many opportunities to do just that, situations in which young black and Hispanic men (there were no other kind in that area) had guns or other weapons while engaging in conduct that would have justified our shooting them.  Neither he nor I ever fired a shot, not while we worked together in that assignment or in the remainder of our careers with the LAPD.

I offer these tales with those officers in San Francisco in mind.  By all means, if any of them are found to be corrupt, bring the hammer down on them and neither I nor any cop I know will shed a tear for them.  But be careful in drawing inferences as to their character and biases based on text messages pulled from their phones.  If cell phones had been around in those early days of my career, I’m sure I would have used mine to exchange thoughts with my colleagues on how to exterminate the drug dealers in that housing project, and I’m sure my sergeant would have used his to convey equally dark fantasies about bringing a violent end to the gangsters who occupied so much of our attention.  Police work is an endeavor given to dark humor, and in my experience the more crime-ridden the neighborhood, the darker the humor.

Ridding the San Francisco Police Department of officers whose only fault is the sending or receiving of politically incorrect or even crude text messages will do nothing to alter the fact that the ethnic groups whose feelings would be salved by it are disproportionately represented among the city’s criminals, a fact that every cop, no matter how idealistic he may start out, comes to learn quickly enough.

If you want the cops to hide from trouble, you need only look to Baltimore for what the consequences will be.  As of the time I’m submitting this article to PJM, 30 people have been killed in that city since April 12, the day Freddie Gray was arrested.  The bloodshed will only accelerate as the city’s cops now go about their duties in such a way as to minimize the risk of joining their six colleagues on the defendants’ side of some Baltimore courtroom.  There’s no reason to expect it would be different in San Francisco — or anywhere else.