Going to Bat for Cuba

Writing and blogging about Cuba for five years has been a generally positive experience and has resulted in several close friendships. One such friend is Val Prieto, the founding editor of Babalu Blog. Val periodically has an existential crisis, during which he doubts whether what we are trying to do — raise awareness of the Cuban reality — is having any effect. It’s usually up to me to talk Val down from the ledge. The other night I found myself up there standing next to him.

During a recent business trip to San Diego, I  arranged to catch the Japan vs. Cuba game at Petco Park during the World Baseball Classic. Excited, I bought a ticket in the 17th row directly behind Cuba’s dugout. It was a great seat, or so I thought. But I was quickly reminded why I have never rooted for any Cuban sports team.

To my right was a group of about 30 Cubans with musical instruments who were singing and making a racket. That would have been great, except two of them had flags similar to the one that Maria Isabel, a Houston-area Obama precinct captain, hung in her volunteer campaign office. It’s a Cuban flag with the Argentine murderer Che Guevara’s face superimposed on it. I immediately wanted Japan to win. 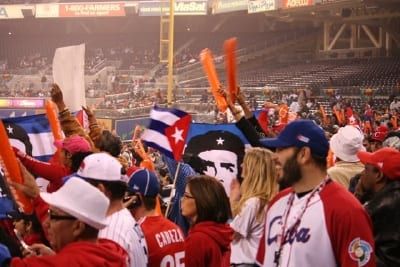 Then I received an email on my BlackBerry from a Cuba-related website that I purposefully avoid. Somehow I’m on its mailing list. The subject line was “End of the Embargo and Obama at the Summit of the Americas.” I replied with one word: unsubscribe. However, the message continued to bother me because it’s true. The U.S. is already the Castro regime’s fourth largest trading partner (enabler). Our country allows entry to communist sympathizers (like the ones who were sitting near me at the ballgame) under the pretext that they are political exiles. I’m sure that some were young Cubans, confused about the symbols of their country. But there were also certainly chivatos (informers) and lowlifes from the Castro regime.

As the game wore on, it became apparent that Japan would win. The mob of Guevara-loving fans became quieter and I became louder. I also managed to improve on my seat. Soon I was in the second row behind Cuba’s dugout. Suddenly, I caught a glimpse of Fidel Castro’s son, Antonio Castro, standing about 15 feet from me. For his blogging efforts, my buddy Val was honored with a visit to the White House to meet the president, while my reward was to be able to sit within spitting distance of Fidel Castro’s son.

I didn’t spit at him, though. I heckled him. I said that Dashiell, an ex-girlfriend of his, sent her regards (not true) and that she’s now acting in porno films (true). I yelled that this is a great country because even Fidel’s son can visit. To the team I yelled that it’s a free country. I yelled “Let them stay, let them stay,” referring to the ballplayers who might be thinking of defecting. Then I yelled “Major Leagues, Major Leagues” to tempt them. Then Ichiro Suzuki hit a triple and I proclaimed that he makes millions in the major leagues. I shouted the names of Cuban major league players like Livan Hernandez and Jose Contreras. I repeated all these things many times in Spanish.

When the Cubans made the last out I kept at it. Then one of the members of the Cuban delegation glared and pointed at me as if challenging me to a fight. My blood began to boil and I could only think of three words (Val’s words): peste a guapo (stench of bully). Here was a man who was probably a Castroite state security agent trying to intimidate me. I yelled at him in Spanish, challenging him to come up and follow through on his threats. Then a San Diego police officer standing on the field signaled me to leave the stadium. I protested and he summoned two other cops. The Cuban goon disappeared into the dugout, so I went with the officers voluntarily. When we got to the main concourse I explained to the cops what had happened — one of the Cuban thugs took offense at me telling the players they could defect if they wanted to, and  he tried to intimidate me by challenging me to a fight. I told them I wasn’t going to back down to some Fidelista henchman in my own country. They assured me I wasn’t under arrest but asked me for my ticket and my driver’s license so they could write a report. They walked me to the gate and I didn’t resist, shaking both their hands as I left.

I waited outside the stadium where the players’ buses were parked. When the Cuban team finally started to come out, an officer came up to me and said, “Listen can you do me a favor and not yell anything?” I was taken aback and protested that it was a public street. He said, “I know but you’ll make my life a lot easier if you don’t yell anything.” I explained that the reason I was in the U.S. was because my parents wanted me to live in a country where I could speak my mind. He said, “Why do you have to do it here? Why can’t you do it in Florida?” He feigned sympathy but had none.

As the Cuban players came out, I tried to make the cop understand that the players are being used and abused by the worst kind of dictatorship. I suspected he would arrest me if I persisted and I couldn’t afford that. I began to walk away and he called out, “Thanks, Henry.” He knew my name. I had been fingered as a troublemaker for making political remarks in a public venue. The world is upside down, I thought.

Walking back to my car I began to question whether my heart was still really in this. The Cuba my parents knew is gone. The Cubans that remain there have been domesticated by the regime. The ones that leave just want to come and enjoy the fruits of capitalism while waving a flag that glorifies one of the two men most responsible for destroying their country and rooting for the other one’s pet propaganda project while his son sits in the dugout. Add to this the fact that President Obama and Congress will most likely dismantle the trade embargo on Cuba without gaining a single concession from the regime. The U.S. will have lost the last battle of the Cold War and soon our tax dollars will be subsidizing one the bloodiest dictatorships in history. A while back, when Fidel Castro suddenly took ill, I thought we were in the home stretch. Suddenly, I could see some form of this regime ruling for 15-20 more years.

What makes me want to champion the rights of people I don’t know in a land I’ve never known? Maybe it’s selfishness. I want to visit Cuba but I want to do so on terms that are morally acceptable to me: when it’s free from the dictatorship my parents had to flee.

I arrived at my hotel room drained. Then I saw an item Val had posted about the World Baseball Classic. Back home in Miami, Team USA had played in a game the day before and the American team embraced a Cuban-American serviceman who had served in both Iraq and Afghanistan and had been wounded and confined to a wheelchair as a result. They signed his flag and made him feel welcome in the clubhouse. Tears streamed down my face as I thought of the contrast between this young man who gave his ability to walk for his adopted country and the deplorable women who flaunted Che Guevara’s face for the TV cameras.

The following day I received an email from a reader, thanking me for writing about the true Che Guevara. The reader, a Gulf War veteran, said there was an upcoming screening of the Che Guevara biopic The Motorcycle Diaries at the college and asked me for advice. I told him to counter the film with the truth. Perhaps they could screen Che Guevara: Anatomy of a Myth or invite Humberto Fontova, the author of Exposing the real Che Guevara, to speak.

That single email lifted my spirits in a way I could never have expected. It made me realize that it doesn’t matter if many people don’t want to listen to the truth about the evil that still lurks out there; some still do. And it’s for those few that I will continue to write about Cuba and about this great country.