Geert Wilders: 'Freedom Is Threatened in the Netherlands'

On January 20, the pre-trial hearing of Geert Wilders’ free speech trial took place in the Netherlands. Wilders is a member of the Dutch Parliament, and his Freedom Party is at the top of the polls.

Wilders is charged with “slandering a group,” “discrimination,” and “sowing hatred.” According to the Dutch public prosecutors, Wilders broke the law by comparing Islam to Nazism, by calling for a stop to all immigration of Muslims into the Netherlands, and by presenting his movie Fitna. (Fitna pictures Islam as a brutal totalitarian ideology that aggressively seeks world domination in democratic and non-democratic ways.) Wilders has no positive words for Islam: “There is no moderate Islam. It doesn’t exist, because there is no distinction between good Islam and bad Islam. There is Islam and that’s it.” “Islam is the Koran, and nothing but the Koran. … I’m fed up by the Koran in Holland: Ban that fascist book!” “Close the borders, no more Muslims into Holland.”

At the center of this trial lies the clash between two Dutch constitutional rights: freedom of speech and non-discrimination. Both rights have equal weight in the Dutch constitution. Both rights resonate with people’s memories of living under the Nazi regime during WWII. The left establishment typically leans towards non-discrimination at the cost of free speech, and the political right typically sees jihadist organizations in the Netherlands as exploiting that.

Of all our achievements, freedom is the most precious and vulnerable. It is for freedom that people gave their lives. … I believe with all my heart that these days freedom is threatened in the Netherlands. … I dedicate my life to the defense of freedom. I know the risks and I pay the price every day [Wilders lives with constant security because of Islamists’ threats]. I won’t complain about that; it is my own decision. … It is not only the right, but also the duty of free people to speak out against every ideology that threatens freedom. Thomas Jefferson, the third president of the United States, was right: The price for freedom is eternal vigilance. …

I don’t intend to offend people. I have nothing against Muslims. I have a problem with Islam and the islamization of our country, because Islam is the opposite of freedom. …

Future generations will ask how we served our most precious achievement in 2010 in this courtroom. If there is freedom for both parties in this debate, and therefore also for critics of Islam, or if in the Netherlands only one side in this debate may be heard? If freedom of speech in the Netherlands is for everybody, or only for some? The answer to this is also the answer to the question if freedom does still have a home in this country.

Wilders requested to have 17 experts and witnesses testify in this trial, among them. These include American critics of Islam like Wafa Sultan, Robert Spencer, and Andrew Bostom, as well as Islamists like Mohammed Bouyeri (who murdered film director Theo van Gogh) and Yussuf al-Qaradawi of the Muslim Brotherhood.

On February 3, the Amsterdam District Court will announce how many of these witnesses are allowed to testify in the trial. The court will also announce the trial’s timetable. 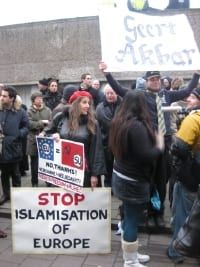 Evelyn Markus is co-founder and vice president of Network on Antisemitism (NOA) (www.noantisemitism.org), a nonprofit based in the Netherlands against anti-Semitism.
Read more by Evelyn Markus