The ‘Empathy Slander’: A Lie That Would End Civilization, A Truth That Would Save It

Finding opportunity in distress is a fine way to honor Mitt Romney.

He built a small nation of jobs doing precisely that, and he represented liberty and America admirably this campaign. He deserves honor. Instead of dread, let’s examine our distress and locate an opportunity for conservatism in the aftermath.

Wonderfully, we mustn’t look hard — the opportunity is clear, at the top of the pile, and already has a grip on my lapels, looking more promising than the office superstore concept where Romney’s Bain found opportunity in efficiency.

The most visually distressing figure I’ve noted yet from the election returns — besides, you know, which dude got the most votes — came across Twitter this morning via Dan McLaughlin, and was then reposted on Ace of Spades. Here’s the post from McLaughlin: 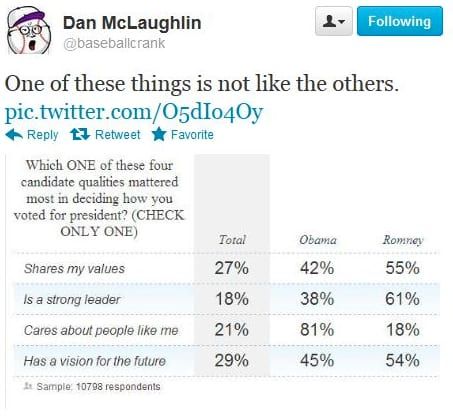 Voters who selected “Cares about people like me” as the deciding factor for their presidential vote broke 81 percent for Obama.

I don’t fear I’m on a limb by interpreting that voters considered “people like me” to constitute those of lesser or no income, or those who feel victimized regarding some factor of their present station. But this mindset is not relevant, or is less relevant here — shifting someone’s outlook from victim to rugged individualist is a hell of a task, and not my concern. I don’t much care if one chooses to pass through life feeling victimized — freedom of conscience and all — but I get unwound when an unconstitutional law attempts to legislate victimhood.

And this is the point: I fear conservatives digest this statistic by feeling they must double down on their outreach, on selling the virtues of liberty and the responsibility it requires. Again, it’s a hell of a task. However, it’s an outcome that could — should, perhaps must — come to pass via presenting a related truth.

Think in terms of efficiency: I don’t care to imbue the “cares” voter with a new philosophy, one now alien to him; I just need to let the “cares” voter know that, if that’s his criteria, then he’s got it entirely wrong.

Conservatives care. His guys don’t give a s***.

A t-shirt, not a years-long grassroots effort at a national conversation.

Conservatism doesn’t need a grand cultural reimagining, it needs to present the most resonant truth. That 81% figure appears to be a leviathan, yet look at it as Mitt Romney, as an American exceptionalist and a clear thinker would, and you should see an exceptional opportunity for success, a great as-of-yet unexplored political message. A supposed greater empathy for “people like me” is directly equivalent to leftist philosophy; leftist philosophy therefore contains a fatal flaw in that in practice its adherents are, statistically, selfish pricks.

Leftists screw up everything, but what they really screw up is … leftism.

They may be wrong on the economy, on the definition of rights, on issues of morality and science, but the only issue that really matters to them, that is responsible for the spread of leftism among its base, in the U.S., South America, anywhere, is the “caring.”

So take that from them, rather than reimagine conservatism and minority outreach for yet one more doomed-to fail PR push. Think capitalist efficiency — just get out the facts on caring.

The ramifications extend far beyond the “caring” voters; this is where my use of “slander” in the title comes in. Every slander about conservative behavior — and perhaps four of them drive voters: racist, misogynistic, selfish, heartless – stems from the “caring” myth. The truth about the caring myth obliterates these empathy slanders. The truth could not be further from the perception — a perception which has done more to destroy conservatism and further tyranny over the past century than any other political lie or misrepresentation.

That 81% figure is not distressing, it’s an opportunity. Enough voters prioritize “caring about people like me” to swing an election. So show them who cares. This doesn’t require a cultural revolution, just the available truth.

Interestingly, we have yet to see a GOP figure advance these facts with any vigor or foresight, despite having had them available for a long while. The party doesn’t have much of a track record with identifying opportunity.