The Incurious Case of the Carbon Alarmists

Question global warming theory by commenting on an alarmist-based site and a reply will likely direct you to the writings of blogger Coby Beck. A self-described software developer specializing in “artificial intelligence,” Mr. Beck is the author of “How to Talk to a Climate Skeptic” — a series of phenomenally popular blog posts seen as unassailable dogma among his fellow believers.

Had it been his intent, Beck could not possibly have forwarded more solid grounds for delegitimizing his movement. “Climate Skeptic” is a mash of remarkably cursory, blinkered responses, leaving unanswered questions readily apparent to the cold, scientific observer. Yet Beck’s charges seem quite willing to battle with his tinfoil-and-cardboard, Hanukkah-play weaponry, swinging madly and wondering why the supposed faith-based and unenlightened are so slow to die or convert.

In love with theory and the “righteousness” of the cause, Beck’s work may be the definitive historical snapshot of the alarmist movement’s startlingly anti-intellectual approach. A movement that assumes to champion the scientific method’s sound defeat of ideology, yet stands content to be so blithely — and publicly — incurious.

For all but the alarmist, simply advancing past the introduction to Beck’s series requires comfort with condescension. Without examining what is to come, apparent is just how much fuel the AGW movement gains from perceived intellectual superiority.

There are four separate taxonomies; arguments are divided by: Stages of Denial, Scientific Topics, Types of Argument, and Levels of Sophistication.

Beck also lists subcategories under “levels of sophistication”: “silly,” “naive,” “specious,” and “scientific.” Only six of his fifty-seven fall under “scientific.” Science is not practiced by contempt, yet Beck and his supporters are quite comfortable being unbecoming. The “skeptics suck” t-shirt should sell well.

But snobbery aside — and Beck certainly is not the worst elitist among his web allies — the toe-in-the-shallow-end answers are the star here. And one post, “CO2 Lags Not Leads,” rises above the scores of others as being most representative of the “Climate Skeptic” phenomenon.

Beck’s instruction on how to parrot the argument — that temperature change historically precedes a rise in CO2, not vice versa — is eerily, fascinatingly, chicken-stock thin. This argument may be the most widely repeated among those whom his posts are meant to convert or silence, and as such should deserve a thorough examination. A data dump. That it does not seems strikingly passive.

Beck’s answer, in full. The readily apparent questions in bold:

When viewed coarsely, historical CO2 levels and temperature show a tight correlation. However, a closer examination of the CH4, CO2, and temperature fluctuations recorded in the Antarctic ice core records reveals that, yes, temperature moved first.

Nevertheless, it is misleading to say that temperature rose and then, hundreds of years later, CO2 rose. These warming periods lasted for 5,000 to 10,000 years (the cooling periods lasted more like 100,000 years!) (why did temperature start cooling when CO2 was at its highest levels?), so for the majority of that time (90% and more), temperature and CO2 rose together (so?). This remarkably detailed archive of climatological evidence clearly allows for CO2 acting as a cause for rising temperatures (“clearly allows”?), while also revealing it can be an effect of them. 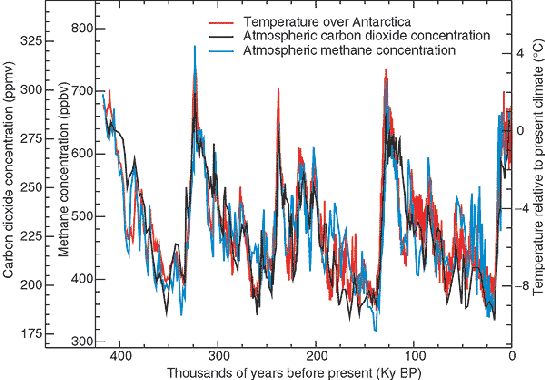 The current understanding of those cycles is that changes in orbital parameters (the Milankovich and other cycles) caused greater amounts of summer sunlight to fall in the northern hemisphere. This is actually a very small forcing, but it caused ice to retreat in the north (miles thick glacial retreat across continents happens from a “very small forcing”?), which changed the albedo. This change — reducing the amount of white, reflective ice surface — led to further warmth, in a feedback effect. Some number of centuries after that process started, CO2 concentrations in the atmosphere began to rise, which amplified the warming trend even further as an additional feedback mechanism. (This is the crux of his argument — shouldn’t he do more than simply state that amplification occurs? Like explain why he believes this to be the case?)

(You can go here for a discussion of exactly this question by climate scientists, with greater technical detail and full references to the scientific literature.) (Why isn’t the technical detail here, instead of being linked? I clicked the link and was sent to a different site offering, almost literally, the exact same verbiage.)

So it is correct that CO2 did not trigger the warmings, but it definitely contributed to them (when did we decide on “definitely?”) — and according to climate theory (which ones?) and model experiments (which ones?), greenhouse gas forcing was the dominant factor in the magnitude of the ultimate change. (Then how did the Milankovich cycle overwhelm CO2 levels to start each decline to the next ice age? How did the same CO2 concentration produce a rise in temperature on one side of the peak and a fall on the other?)

This raises a warning for the future: we may well see additional natural CO2 come out of the woodwork as whatever process took place repeatedly over the last 650K years begins to play out again. The likely candidates are out-gassing from warming ocean waters, carbon from warming soils, and methane from melting permafrost. (So it gets warmer and then the carbon comes out. Isn’t that the skeptic argument?)

Of all the confounding qualities embraced by the AGW phenomenon — and with James Hansen’s recent endorsements of criminal activity, perhaps arrogance and misanthropy run a close second and third — the failure of adherents to raise a hand and boldly ask the crank professor a follow-up question seems most historically strange.

I don’t understand the willingness of students to assume an answer must exist to the unasked question, that it must simply be covered elsewhere in the syllabus. I am glad to find qualified others — such as Anthony Watts — who are uncovering the contradictory answers to the questions that truly objective laymen find quite natural to ask. I simply wish that Beck and his ideological allies could summon the initiative to do so.

I don’t find it to be likely. Instead, I fully expect academics to one day dig up web artifacts such as “How to Talk to a Climate Skeptic” and wonder, sociologically, why so many found it perfectly acceptable to remain so incurious.