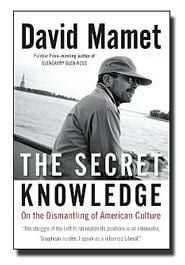 Famed playwright and screenwriter David Mamet came out of the ideological closet three years ago as a newly minted conservative.

The Secret Knowledge: On the Dismantling of American Culture lets Mamet smash the liberal groupthink he blindly called his own for too long.

The book, a scattershot series of essays unified by Mamet’s striking prose, doesn’t read like a typical conservative manifesto. Would Sean Hannity or Ann Coulter expound on the id, the ego, and the superego in explaining how liberals brush aside inconvenient facts?

There’s plenty of red meat for right thinkers, but the Pulitzer Prize winner concerns himself with the bigger picture, the cultural struggle for a nation’s soul. Liberal dogma is decimating the economy, the family unit, and the culture at large, he argues.

The book feels like the rebirth of an intellectual, a man whose mind is now in the service of an entirely new paradigm. And he can’t wait to share what he’s learned with the masses.

This former “brain-dead liberal” admits he had never spoken with a conservative or read a conservative’s work until roughly eight years ago. But The Secret Knowledge reveals he’s been catching up with alacrity.

Those looking to read Mamet smite his smug celebrity peers in casual debate will be disappointed. Who wouldn’t want to drop in on Mamet at a celebrity gathering, waiting for him to pounce after listening to yet another tired rant against the GOP?

Then again, that may be a good thing. Mamet appears incapable of pulling his punches.

He isn’t the first to call the Left’s embrace of socialism its own brand of religion, but his muscular wordplay brings home the point in intense fashion.

He dubs socialism “the largest myth of modern times and the most easily debunked,” and says those on the Left who demand Israel make all manner of concessions in the name of peace should be called out for who they are.

“Is this desire anti-Semitism? You bet your life it is,” says Mamet, who is Jewish.

You can almost hear Alec Baldwin snapping off such a line on the big screen like he did so memorably in Glengarry Glen Ross, the film version of Mamet‘s celebrated play.

And Mamet goes further a few pages later, declaring that Western liberals enjoy the “contemplation of the suffering of the Palestinians” in the endless Middle East debate.

“Actual information about the Middle East conflict is considered an intrusion and a distraction from the spectacle,” he writes.

The author does single out a few celebrities for their knee-jerk sympathies toward Communist countries. “Happy dupes” like Susan Sontag and Jane Fonda travel abroad to mock the U.S. even though the citizens of the lands they visit exist with a fraction of the liberties enjoyed back home. The author also skewers liberals who sing the praises of equality but aren’t willing to reach deep into their pockets to help balance the scales.

Knowledge doesn’t go out of its way to tweak Democratic politicians even if President Barack Obama takes it on the chin on more than a few pages. Mamet’s criticisms of liberalism extend beyond today’s office holders.

Some of Knowledge’s best passages allow Mamet to reveal the personal side of his conversion and his hardscrabble roots.

Not all of Mamet’s declarations are on target. He contends, rather weakly, that directors are often immune to liberal memes.

“A director cannot deal in fantasy… he has a certain amount of time and money with which to do so, and no amount of fantasy will stop the sun going down on a day on which he has not completed his assigned filming,” he writes.

One need only reference such hard-left directors as Woody Allen, Lars Von Trier and Rob Reiner to undermine Mamet’s argument.

And Mamet often lumps liberals and socialists together, a fact many on the left would respectfully dispute.

Before Mamet’s through, he’s trashed Sarah Palin’s feminist critics, liberal arts education, global warming scare tactics, affirmative action, and a host of other liberal sacred cows as if he had spent a lifetime studying their flaws.

Mamet says his conversion began, in part, when he realized he wasn’t leading a life that echoed the social justice mantra he allegedly supported.

“Those of us untroubled by this disparity, I saw, called ourselves ‘Liberals.’ The others were known as ‘Conservatives,'” he says.

The author may be making up for lost time with The Secret Knowledge, but to conservative readers it’s a pleasure to be in the company of a man who can state their agenda in such plainspoken, and endlessly biting, terms.