Twilight Struggles, Then and Now: A Review of The Party Line 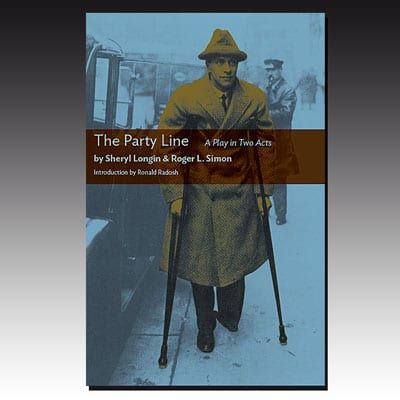 The West’s confrontation with Islam is the great drama of our time.  Yet both the theater world and the movie industry – sometimes out of outright fear, sometimes out of a misguided notion of sensitivity to Islam, and sometimes out of a toxic combination thereof – have conspicuously avoided making drama out of that drama.

There have been very few exceptions to this rule.  Almost all have been craven, mendacious exercises in multicultural cringing and Western self-hatred.  For anyone who recognizes how crucial a role compelling theater or film can play in helping us to understand our own era, in moving us with stories that communicate that era’s most urgent truths, and in giving us the strength to tackle its most formidable challenges, this well-nigh universal silence amounts to a shameful abdication of responsibility.

The Party Line, a two-act play by Sheryl Longin and Roger L. Simon that has just been published by Criterion Books but that has not yet been produced, is a brave and admirable effort to fill this disgraceful void.  For that alone, it is deserving of great commendation.

But it is far more than that.

Before I say what The Party Line (available from Amazon and Barnes & Noble) is, however, let me first say what it is not.  It is not a conventional narrative.  Its settings range from New York to Amsterdam to Moscow to Florida; its time frame shifts constantly, mostly between the 1930s and 1990s (although one scene takes place as early as 1920 and another as late as 2003); and it contains a mix of fictional characters and real historical figures.

It is, in short, a highly ambitious concoction.  And – unlike the future that Lincoln Steffens thought he had experienced on his 1919 visit to the Soviet Union – it works.  It is, in fact, a wonderfully conceived and strangely moving creation that I am extremely eager to see performed on a stage.

At the play’s center are two colorful, remarkable, larger-than-life men who actually existed.  One of them is Walter Duranty (1884-1957), the British-born journalist who served as the New York Times‘s Moscow correspondent from 1922 to 1936.  In his heyday a much-heralded figure (he won the Times a Pulitzer), Duranty lived to see his star fall when it became increasingly clear that during his tenure in Moscow he’d been nothing but a lying Kremlin mouthpiece – one who was so utterly lacking in conscience that he strove to cover up the Ukrainian famine and to smear his worthier colleagues who strove to get out the truth.  Like Quisling’s name, Duranty’s has entered the lexicon, becoming a byword for fraudulent journalism about totalitarian governments.  Among current practitioners of his profession, Duranty is the very symbol of the kind of corruption they should consider themselves honor-bound to avoid.

The other real-life member of the play’s dramatis personae is Pim Fortuyn (1948-2002), the liberal Dutch sociologist-turned-politician who, over a brief period in the 1990s, rose to prominence and popularity in his country as an outspoken critic of its Islamization and who, at the time of his assassination by a radical environmentalist, was in all probability on the verge of becoming prime minister.  Like Duranty, Fortuyn has become a symbol – in his case, of valor and nobility of spirit, and, alas, of what can seem, in today’s Europe, like a lost cause, namely the hope of rescuing European liberty from the onslaught of Islam. 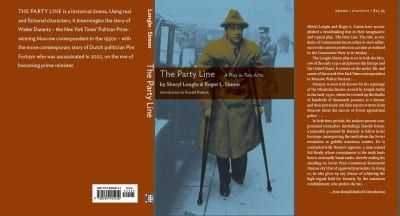 It is around the figures of Duranty and Fortuyn that The Party Line pivots.  There are superficial similarities between them: both were writers; both prized their creature comforts; both were hedonists, sexual adventurers (one straight, one gay) of whose private lives the play gives us a glimpse.  But otherwise they were opposites.  Duranty – who, in Stalinist Moscow, led a life of capitalist luxury – was, as much in his personal life as in his professional life, utterly indifferent to the fate of others; among other things, he was, as the play illustrates, quick to abandon the Russian woman he had lived with for years and the son she bore him.  Fortuyn, by contrast, had a deep-seated sense of responsibility to others, both personally and in the larger world, and it was this that motivated him to risk life, limb, and love to preserve for all Dutchmen the freedom he so prized himself.

The life stories of Duranty and Fortuyn are both about party lines.  Duranty chose to toe the Soviet line in exchange for a couple of decades of luxury, honor, and reward – and, as the play shows, a pathetic, disgraced senescence, and an afterlife of obloquy.  Fortuyn emphatically rejected the multicultural line, for which he reaped in his lifetime the scorn of the Dutch and the international media (which demonized him, obscenely, as a fascist) and for which he ultimately gave his life – and won a glorious posthumous reputation among his countrymen, who in a poll taken two years after his death named him the greatest Dutchman of all time.

Among the other real-life people to whom The Party Line introduces us is Aleister Crowley, the British Satan-worshipper, “occultist,” and all-around creep and crackpot who, I had forgotten, was actually a friend of Duranty’s, and whose presence in the very first scene of this play helps to set in our minds the idea that, yes, there is such a thing in the world as evil.  Another real person who figures in the drama is the loathsome Konstantin Oumansky, director of the Soviet Press Office, who vetted Duranty’s Times dispatches for orthodoxy.

But most of the playwrights’ other characters are inventions, several of whom serve to link Duranty to Fortuyn in one way or another.  In real life, nothing is known of the fate of Duranty’s son by his long-suffering Russian common-law wife; that son, in this play, grows up to become Pim Fortuyn’s lover.  Sid Brody, a correspondent for UPI, and his wife, Rose, leave New York for Moscow in 1928, true believers in Stalinism determined to do their part for the workers’ revolution.  Diana Pierson is a well-meaning American heiress who, smitten by Communism in her youth, has her eyes opened by a tour of the Soviet Union in the 1930s and, six decades later, remembering the lessons she learned as a young woman about totalitarianism, cheers on Pim Fortuyn.  Her son, Stockton Rhodes, is a CNN reporter who after Fortuyn’s murder must decide whether to face the threat Fortuyn warned about or remain loyal to mainstream-media orthodoxy – and thus keep his job.

The scenes in which these people meet, size up, and confront one another, in various times and places, are often clipped and, at first, enigmatic.  In the beginning, indeed, the play feels almost like a four-dimensional mosaic – a series of snapshots whose relation to one another is not immediately apparent.  Gradually, however, the pieces start falling into place, and the connections begin to be perceptible, as if to say, yes, it can take time to grasp the truth.

The playwrights’ point in linking Duranty and Fortuyn by means of so many different threads is clear.  Today’s jihadist Islam, like Stalinism, is a form of totalitarianism.  Now, as then, many people in the West vigorously deny this and cling to the party line – the views that count as received opinions among the bien pensant.  Some do this because they’re true believers; others because they’re cynical careerists; still others because they’re just plain cowards.  Then there are the few brave souls who, even though they know they’re courting personal and professional disaster, speak the truth, selflessly, in the name of liberty.  Gareth Jones, who doesn’t figure in the play’s cast of characters but whose name figures prominently in the dialogue, was one such hero, reporting the truth about the Ukrainian famine while Duranty was lying about it.  Another such hero, of course, was Fortuyn.

Although The Party Line deals with ideas, it’s not the kind of “drama of ideas” in which the characters are the authors’ mouthpieces or nuance-free symbols of good or evil.  The men and women who populate this play are living, breathing individuals whose various reactions to totalitarian ideas are recognizable to anyone who has observed such things in real life.  Jihadist Islam may not be exactly the same thing as Soviet Communism, but it brings out the same range of responses in free people who are confronted with it.  Now, as then, there are media figures who are breathtakingly willing to hide the monstrous truth about despotism in order to keep the despot happy.  Now, as then, there are those who see the enemy plain, and are breathtakingly willing to put their lives on the line for liberty.

“Those who cannot remember the past,” Santayana famously observed, “are condemned to repeat it.”   Among the lessons of this remarkable play are that the threat of tyranny is eternal, that the ability to be taken in by forms of tyranny disguised as benign answers to all the world’s problems is eternal, and that the challenge to stand up for freedom in the face of such insidious threats is also eternal.  Credulity, cowardice, courage – all recur from generation to generation.  There will always be people who cherish the freedom to lead their own lives as they wish; there will always be those who desperately crave an ideal order to which they can subordinate themselves.  Some treasure the truth, some can’t face it, and some profit by being pathological liars.  The same drama repeats itself time and again, with the forces of darkness appearing in different forms and under different names, and the heroes and villains not always instantly recognizable.

No other dramatic work with which I am familiar, either on stage or on screen, has summed up the salient truths of our time as effectively as The Party Line does.  It is nothing less than a profound statement about the lessons of the last century – and about the failure of so many people to learn them.  Yet what makes it so powerful is that it does not come across as remotely preachy.  On the contrary, it is a deeply human story that – one hopes – will speak to a wide range of audiences, opening their eyes to realities that are right in front of their noses, but from which they have been trained to look away.

Read another review of The Party Line at City Journal by Stefan Kanfer.