A little over a year ago, Honda’s luxury Acura brand was criticized for not offering a powerful V8 engine in its flagship sedan. After all, the pundits opined, luxury buyers insist on eight or more cylinders when they’re spending more than $50,000 for a premium chariot. The fact that Acura’s 3.7-liter V6 generated 300 horsepower, a specification that used to be perfectly reasonable for eight-cylinder motors, seemed not to matter. The image was everything.

At the North American International Auto Show in Detroit this week, I pondered this supposed entrance to the luxury club with some amusement while I witnessed Mercedes-Benz, Lexus, Cadillac, Lincoln, Chrysler, and the Fisker Karma all spin around their turntables with four-cylinder engines. If the name Fisker draws a blank, it’s a new start-up that’s building $80,000-and-up, plug-in, extended-range electric luxury cars. Electric luxury was also the theme for the other brands except Lincoln, which will test acceptance of rather petite luxury with turbocharged 1.6-liter power — the luxury equivalent of a pocket pooch. 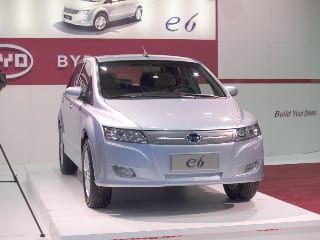 These guys want to sell plug-in electrics from China and they have some experience over there. 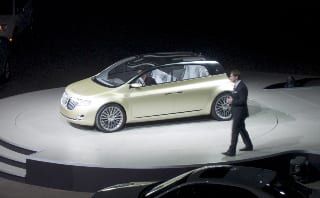 Here’s a Lincoln concept with four cylinders and no electricity.

Depending on your point of view, the sudden emphasis on fuel sipping is either that it’s about time we save the planet and end our reliance on imported oil, or that these guys shouldn’t take the recession so seriously. And for those few who want their reward for all those years of toil to be a voluptuous, 12-cylinder Autobahn cruiser, I’d suggest you get that order in soon.

Although there were far fewer shock-and-awe car introductions, the type that employs a legion of Broadway stagehands and extras to produce, the press preview days were not without amusement. The show opened with the announcement of the North American Car and Truck of the Year winners. While few of my colleagues were surprised that Ford’s reworked F-150 pickup prevailed over the Dodge Ram and Mercedes ML320 BlueTec diesel, some oxygen left the room when Hyundai’s new Genesis edged out Ford’s Flex. The big, pugnacious Ford wagon is clearly a segment-buster, but look at how far Hyundai has come.

In the main hall, General Motors had gathered retirees, workers, and young people to hold signs in a mock rally to promote the arrival of the Cadillac Converj, an extended-range electric that’s based on Chevy’s Volt, along with two new models that will be available in the summer. The fully reworked Buick La Crosse and Chevy Equinox look every bit as tight and finished, inside and out, as their import rivals. Now the challenge is for the company to survive. Meanwhile, outside Cobo Hall, a gaggle of non-scripted pickets carried signs that urged fair treatment for UAW workers during the bailout drama. 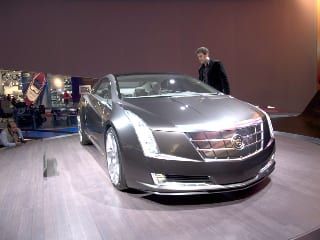 The Caddy concept, based on the Chevy Volt system, may be the best-looking 4-cylinder luxury car.

With moderate fanfare, Ford unveiled its new Taurus with enough emotional design to pull it out of the ready-for-rental category and provide a stylish option to mid-size sedan buyers. Lexus unveiled a new HS250h model that it described as the “world’s first dedicated luxury hybrid,” with hybrid architecture based on the new Prius. But instead of simply bestowing luxury on a Toyota, the HS250h gets a more powerful gas engine and a heavy dose of comfort and convenience. Although fuel economy figures were not released, Lexus asserts in press materials a 30 percent improvement over the most efficient model in its current lineup (42 mpg combined?) and, during the unveiling, Lexus VP Mark Templin suggested better city economy than the 33 mpg Smart ForTwo. One thing we know for sure: it won’t top the new 50 mpg Prius. 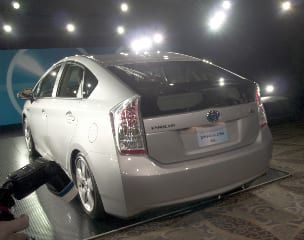 The new Prius is what the wind tunnel does when you try for low wind resistance. Looks a lot like the previous Prius.

I missed Lamborghini’s fashion show, a bit of slinky model sleight of hand that only an Italian automaker can pull off with a reasonably straight face. It’s the kind of unveiling you do when there isn’t a new car model to show, and it works — at least with the guys. The second day, GM CEO Rick Wagoner took the stage with a big battery pack and a Chevy Volt for company. Wagoner announced the construction of a new 30,000-square-foot battery laboratory, the sponsorship of an electric car engineering program at the University of Michigan, and a plan to build battery assemblies in Michigan. Then he thanked a bevy of politicians, from the governor to Congress for their support. Wagoner played basketball at Duke and he has already discovered that politics is a contact sport. 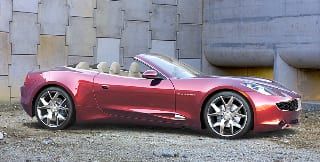 For drop-dead looks in plug-ins, the Fisker Karma is my winner. But will we see the real thing?

Perhaps the most intriguing cars at Detroit were Fisker’s Karma sedan and new Karma S convertible coupe with a folding hardtop. The charming entrepreneur and former Aston Martin designer promises extended range, plug-in electric exotics with thrilling performance, drop-dead looks, and a price that’s right in the middle of the gasoline luxury offerings. He’s got a smart team together, with ex-BMW and Volvo chief Vic Dolan leading the marketing, and they’ve already signed 22 dealers. If it’s not vaporware, it should sell like hotcakes. Otherwise, we’ve seen a very pretty Tucker.

Brian Douglas has driven everything with wheels during his career in the automotive technical, marketing, and journalism professions. He is currently a contributing expert for KGO Radio, WHEELS editor for the San Francisco, Washington, DC, and Baltimore Examiner newspapers, automotive features writer for the Minneapolis/St. Paul Times Tribune, and automotive editor for Gentry and Ranch & Coast magazines.
Read more by Brian Douglas